Brynderwyn (brin-DER-win) is a city located on Rabe Island, at the mouth of the River Rabe, and on the shore of Port Adelaide in Cambria, Vodeo. The city is approximately 50 kilometres south-east of Marazan and around 130 kilometres north-west of the provincial capital, Holme. At the 2017 census the Brynderwyn urban area, which includes Methuen, Neville Bay, St David's, and Tahorine Island, recorded a population of 149,955, making it Cambria's second-largest city, behind Holme.

Brynderwyn was established on 15 June 1594 as the capital of the Rhysiogan capital of New Cambria. After its transfer to Ingerish control in 1616, it became the administrative centre for the Cambria Colony until 1703, when the seat of government was moved to Holme. While the city was surpassed by Holme in terms of population by around 1745, it retained an important role as a trading hub due to its location at the mouth of the River Rabe. The growth of the colony inland made the river trades valuable for Brynderwyn, and until the arrival of the railways from the late 1840s onward was one of the country's major ports.

Brynderwyn is today a major tourist centre, due principally to its colonial architecture, history of pirate activity, and for being the gateway to the Welcome Islands. Notable tourist attractions include the Boardwalk and Old Watch Tower, Governor's Manor, the Port Adelaide rum distillery in the city's South End, and Forts Brynderwyn and Kenway, both part of Port Adelaide National Park.

Archaeological evidence has suggested that the first permanent settlement at Port Adelaide was established in the first century BC, and around 700-1000 AD was one of the most significant areas of tribal inhabitation along the Colony Coast. By 1594, the principal tribal villages were located at Neville Bay, Wanverdaican, Tahorine Island, and on the southern end of Rabe Island.

In early 1594, religious tensions in Tircambry prompted 144 settlers from Rhysiog to sail for Tarephia in search of a place to establish a new colony. On 15 June 1594, the settlers landed at St Thomas' Beach and established Brynderwyn, named for the tallest hill on the island. The town became the administrative centre and main port of the colony of New Cambria, and in the 1609 recorded a population of around 3,000. Brynderwyn was the site of Vodeo's first legislature, the Cynulliad Trefedigaethol (Colonial Assembly), which first met in 1604, and continued until the colony's transfer to Ingerish control in 1616.

Despite the town's relative prosperity, the relative failure of the colony's plantations to generate sufficient income meant that it was too much of a financial burden on an already indebted Rhysiogan government. In 1615, Rhysiog agreed to sell the colony to Ingerland for the sum of 40,000 thalers.

The arrival of Ingerish investment after the transfer of ownership on 3 April 1616 transformed Brynderwyn. Larger stone and brick buildings replaced many of the original wooden buildings, and construction commenced on a more permanent waterfront. The arrival of Ingerish settlers and convicts in far greater numbers than Brynderwyn had supplied soon tipped the town's demographic balance, to the extent that within ten years, more than three-quarters of the population was of Ingerish origin. In addition to this, the opening of large numbers of plantations along the Rabe turned Brynderwyn into a major trading port. Early attempts to rename the town to King's Haven proved unsuccessful, with both Rhysiogan and Ingerish settlers preferring the original name. In 1619, after significant pressure by townspeople who had been used to their own house of assembly, Governor Albert Ford re-established the Colonial Assembly, albeit resembling the structure of the Ingerish Parliament; this legislature would go on to later become the Cambrian Parliament in 1726.

For much of the 17th century and and part of the 18th, Brynderwyn, combined with Port Elizabeth on Welcome Island, was one of the most important ports in the Sea of Uthyra, well ahead of Avington and Saviso, and rivalling Holme. In 1687, Brynderwyn was proclaimed a city with the construction of a cathedral on St Thomas Quay, and in 1696 the population of the Port Adelaide area was estimated at some 21,000. Brynderwyn was succeeded by Holme as the seat of the colonial government in 1703, with both the government and the Ingerish colonial administration seeking to move their operations from the 'rowdy' Brynderwyn to the more respectable Holme.

The shelter provided by Port Adelaide made it popular with ships of all kinds, which helped to promote the town as a trading centre. As piracy in the Sea of Uthyra grew in the latter half of the 17th century, Brynderwyn came to be well-regarded by pirates and privateers as a safe harbour where they would be protected from the navies of other nations, and could enjoy drinking, gambling, and prostitution from a large number of the city's establishments, many of which were clustered along the waterfront. Port Adelaide was large enough to accommodate their ships, and as non-Royal Navy vessels were barred from using the town's dry docks, Brynderwyn proved to be an ideal place to careen and repair their ships.

The outbreak of the Ingerish Civil War in 1715 saw most of the Ingerish troops and ships stationed in Brynderwyn recalled to Ingerland. Faced with the threat of attack by the Castellanese or Franquese, the Cambrian governor offered pirates and privateers a freer hand to operate in return for their defence of the coast. While the city's nobility were disturbed by the presence of so many pirates and privateers, and the industries that catered to them, the commercial activity was able to mitigate to an extent the economic downturn caused by the lack of trade with Ingerland. Indeed, when Vodean historian James Graham wrote his history of Brynderwyn in 1886, he remarked of the city during the Civil War:

Brynderwyn had become wholly consumed by vice, and the city's economy was tailored to it wholeheartedly. The town concerned itself with little more than drinking, gambling, and whoring, in the hope that in some way it may provide the city with some finance until the Ingerish trading vessels returned. Some were known to spend up to twenty guineas in a night, and the prostitutes of the town could charge the same for their services. The respectable port of only twenty years prior had been forgotten in the glut of hedonism that had taken the city.

Regular trade with Ingerland began to resume in 1724, and the return of Ingerish troops and naval vessels meant that pirates were no longer needed to protect Brynderwyn and the coast. While Ingerland had initially turned a blind eye to the pirates and privateers, by the end of the 1720s its opinion had begun to change, and in 1731 the arrival of a new governor with instructions to clean up Brynderwyn marked the beginning of the end for Brynderwyn's pirate era. This coincided with a waning in pirate activity in the Sea of Uthyra, and within a few years the city had settled back into being a quiet trading port. 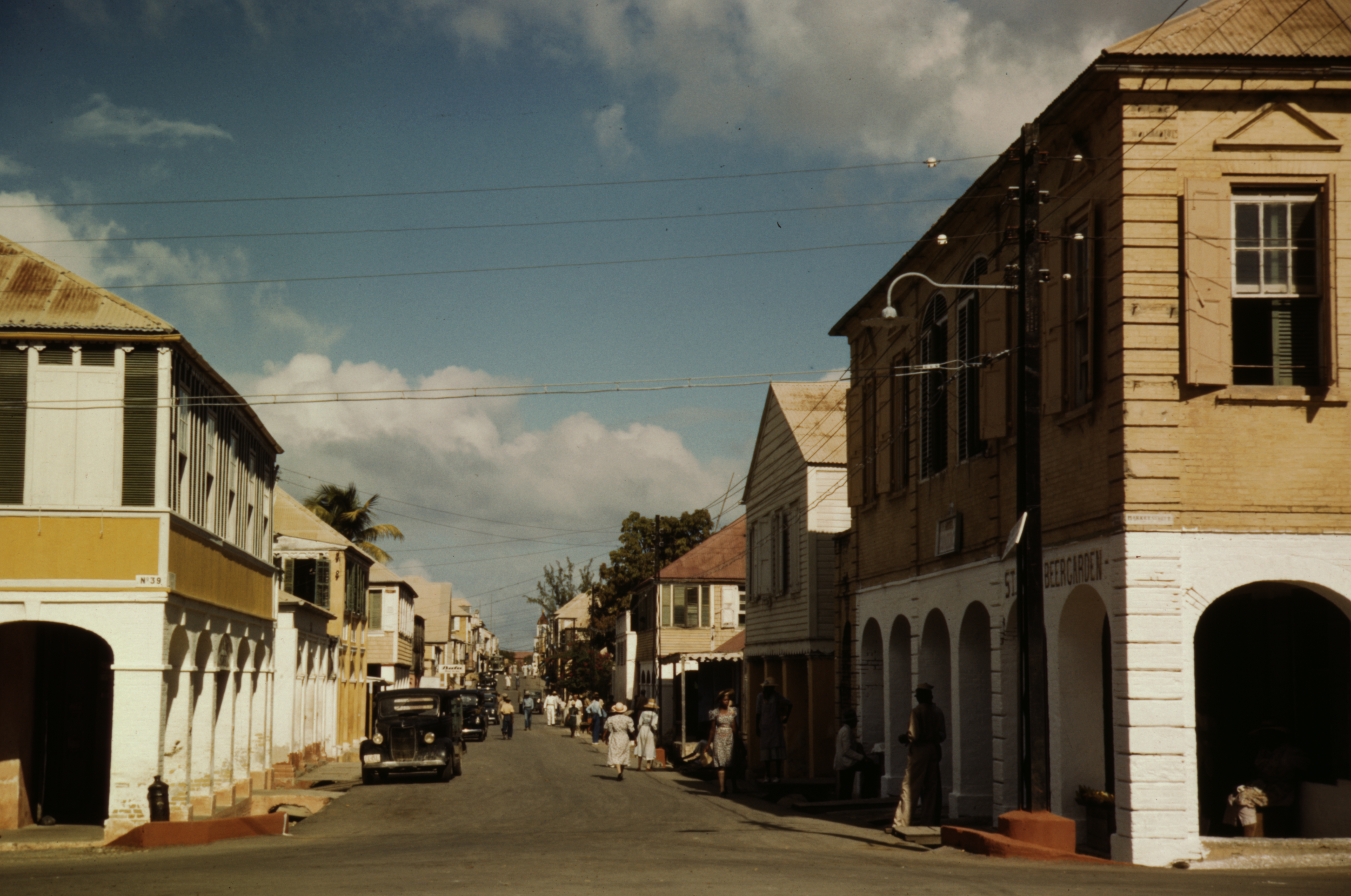 Brynderwyn benefited from the large increase in tourism to Vodeo following the Great War. In the 1950s, a pirate craze swept the nation, with books, music, and television and radio plays created to capitalise on the public interest. Seeing an opportunity, in 1955 Brynderwyn proclaimed itself the "Pirate Capital of Vodeo", and embarked on a sizeable campaign to reinvigorate the city's history and appeal to tourists by emphasising the city's piratical past. In the 1960s, the Cambrian government began providing funding for the protection and restoration of much of the city's colonial architecture, and in 1985 the city centre was named a National Historic District.

In 1989, Brynderwyn was granted its own flag, superseding the New Cambrian flag which had been used unofficially to represent the city. The flag, designed to mimic that of Cambria, instead uses a black-and-white palette with the colour order of the stripes reversed, with a skull and crossed swords in place of the crown.

Brynderwyn is today well-known for its "parking meter pirates": men and women in pirate gear who wander the city centre, topping up parking meters, giving tours, providing information and directions, and posing for photographs. The practice was started in 1958 by the Brynderwyn Business Association, who were opposed to the installation of parking meters around the city, which they believed were bad for business. To counter this, the organisation paid locals in pirate attire to top up parking meters that were due to expire from a bag of "pieces of eight" (in reality, sixpences), thereby saving the motorist from a £1 fine. While the practice of feeding parking meters was technically illegal, the Brynderwyn City Council chose to turn a blind eye, as the pirates proved to be good publicity and an attraction for the city. Working as a parking meter pirate carries a level of prestige amongst Brynderwynians; Bill Morrison, Mayor of Brynderwyn from 1996 to 2008, was a parking meter pirate in the 1970s, and capitalised on the job as part of his election campaigns.

Brynderwyn operates a 6km heritage tramway between Viviantown and South End that connects a number of major tourist attractions, including Fort Brynderwyn, the waterfront, Market Street, and the Port Adelaide Rum distillery. The line was inaugurated in 2005 as a tourist attraction between Fort Brynderwyn and Market Street, however the success of the line with both tourists and locals alike led to several extensions, with the line's final extension, to Viviantown, completed in 2014. The tramway uses several historic trams built between the 1900s and 1950s sourced from around Vodeo.

Brynderwyn is served by VR passenger services as part of the Avington-Holme route.

Brynderwyn Airport is located south-east of the city near Wanverdaican, and is linked to several provincial capitals as well as Promissão.