This page is intended to help users make countries that look realistic.

To build a more realistic country, we might want to reconsider our foundation. Instead of starting with motorways, let's start where the real world starts: the land.

Where are the mountains and other obstacles?

The most important feature of the land is the obstacles it presents to human settlement. Most large countries in the real world contain such obstacles, such as vast deserts (Australia), dense rainforests (Brazil), or huge regions of bitter cold (Canada). Almost all large countries have mountains of some kind as well — of the 100+ real countries with over 100,000 km2 of area, all but eight have more than 1000 meters of elevation. When developing an OGF country, think about its mountains and what other obstacles it may have. Is it at a latitude that might be dry like a desert, or hot and wet like a jungle? Is it far enough north or south to have areas of extreme cold? Where would those areas be?

Let's take the same country as before, but instead of starting with motorways let's start with the land and its natural obstacles.

Perhaps our country isn't located in a desert, jungle or polar region... so we'll just add mountains, and maybe a large wetland in the southeast. These will make for some good obstacles. (In this case, we're showing the mountains by drawing forests, because in most places mountains tend to be more forested than flatlands, due to the fact that most flatland forests have been cut down and turned over to agriculture.) 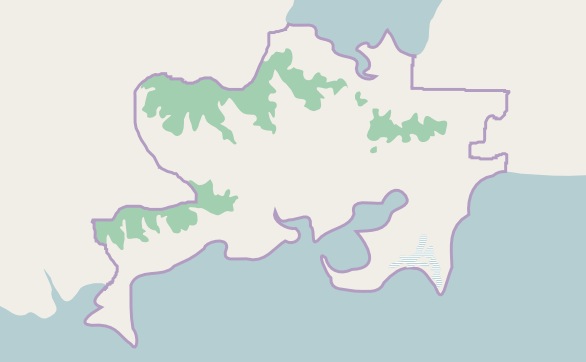 Where do the rivers flow?

Once the mountains are in place, the next natural step is rivers. In this map we add rivers flowing from areas of high elevation down to the ocean. Remember that rivers tend to flow through valleys, and usually take a shorter path to the sea, often entering the ocean at an inlet. Two smaller rivers often combine into a larger one as they flow downstream, but a river almost never splits into two, except in a very flat area near its mouth, where it may form a delta. (Lakes are also good to add at this point, but remember that although several rivers may flow into a lake, normally only one river can flow out of a lake.) 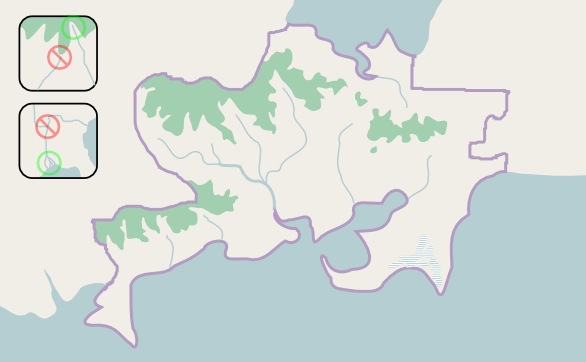 Where do the people live?

After finishing the major rivers, we can start figuring out where people built cities. Imagine if you were the people settling the land... where would you build your settlements? Almost all will be near a river of some kind. Not only is fresh water crucial for drinking, washing, and other household uses, but it's also necessary for industry as well as agriculture. In addition a river is often a vital transportation route as well, providing a link along the center of a valley and sometimes to the ocean. In the real world, the vast majority of large cities are located on a river of some kind. The other major place for cities is fine harbors for ports that thrive on trade. These harbors tend to be located at protected areas, normally at a river mouth or near the innermost point of a bay, not usually along a featureless coastline or at the tip of a promontory. Although there are exceptions, fewer cities will typically be built in the mountains, deserts, jungles or tundra, leaving significant areas of the country with very little population. 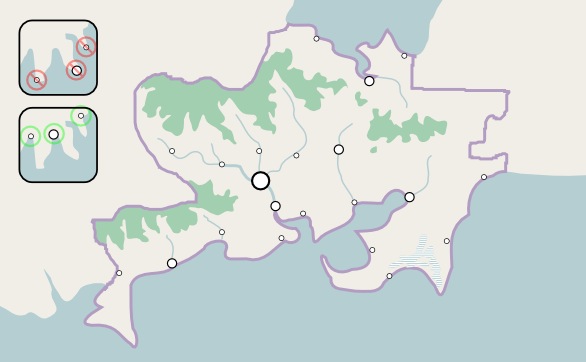 How are the people connected?

Once the cities are in place, then we can think about how they are linked... and with motorways this means thinking about money, because in real life transportation funds are limited. So we begin with a minimalist network of motorways, connecting only the largest cities as efficiently as we can, linking through intermediate cities to serve them along the way, and avoiding the mountains and other obstacles as much as possible. Smaller cities aren't worth the vast expense of a motorway connection; they can be hooked up later with smaller roads. Imagine that every kilometer of motorway is actually costing you money. Before constructing any motorway, ask whether it will serve enough traffic to be worth all the cash you're paying. 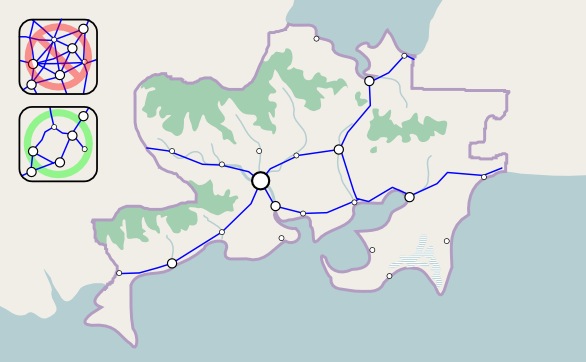 Next is the network of supporting highways, which provide links to the smaller cities and serve the more populated rural areas. Money is still a crucial factor though. Priority for these highways goes to valleys, lowlands, and coastal areas that have some population, as well as connecting the minor cities to their larger neighbors and to the motorway system. These highways still tend to avoid the obstacles whenever they can, and never go anywhere without a reason. Sometimes they simply reach a point beyond which it is not economical to build any further, and so they stop. Don't "finish" every highway — remember incompleteness can be realistic. (Railways follow the same general patterns as roads; for more detailed information see Help:Making realistic railways.) 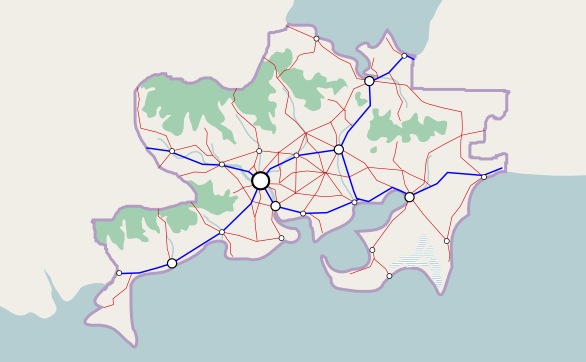 For the final part of the planning process, we go back and make revisions. The junction of a number of roads looks like it would be a good place for a city, and so we add one there. A few stretches of supporting road seem like they would have a lot of traffic, so we upgrade them to motorway.

(Not shown on the example map here, but this is also a good time to plan your country's internal boundaries — states/provinces/etc. — based on the natural landscape and population patterns. Boundaries will often follow major physical features such as mountain ranges, and will often form smaller units in high-density areas, and larger units in low-density areas.) 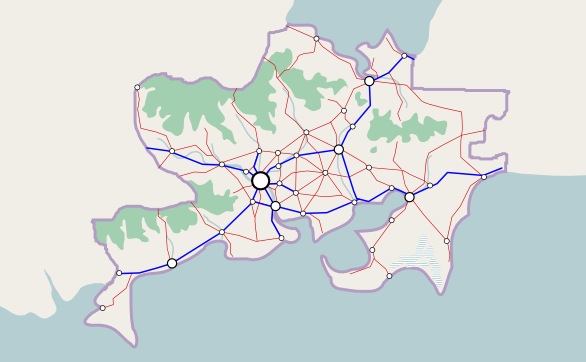 Before & after: the results of better planning

By following a more natural planning process, the result is a country with a more natural feel. High-density and low-density areas help to define a distinct national heartland, surrounded by more distant peripheral areas. Mountains give us large unpopulated spaces, while rivers and lowlands serve as the clear channels of agriculture, trade, and human settlement. The road network is focused on efficient connections between the main centers of population. The contrast between dense and sparse mirrors the real world, where mountainous areas help define the flatlands, empty spaces help highlight the crowded ones, and busy corridors make the remote corners feel even more remote. 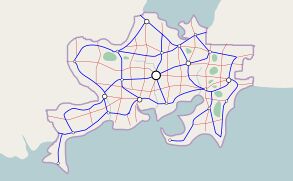 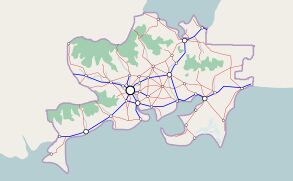 After the planning is finished, next comes the fun part: details.

Remember, details are what make OpenGeofiction so interesting. The fact that visitors can zoom in and explore this place at any scale is what sets it apart from almost any other imaginary world out there. So after completing a realistic outline for your country, go ahead and begin the long, long journey of adding details.

Adding details is probably 99.9% of the OpenGeofiction experience... so have fun and enjoy it!