You're reading chapter one of a four-part series. This page is an introduction to railway transport, it explains its function throughout history and in the present, we'll look at examples of different railways from around the world. And finally, each week there is going to be a bunch of exercise. If you're going to be following them, by the end of the month you'll have finished a short railway line with a couple stations, branches and other features. Let's go!

A brief summary of railway history

Unless you count the attempts from earlier, including railway cars dragged by horses, the history of rail transport started around the 1830s. The first railways were built on the British Isles, but soon they spread all across Europe, North America, and India (i.e. British colonies and ex-colonies) Here are some of the reasons railways got so popular so quickly:

In the early days, railways were used mostly for transporting goods, not passengers. The most important commodity was, perhaps unsurprisingly, coal. Some railways were constructed privately, some of them by the state. Namely Austria-Hungary and Germany invested a lot of state money into rail transport, which is why Central Europe has the densest rail network in the world. The construction of railways also played a key role in the colonization of the USA. 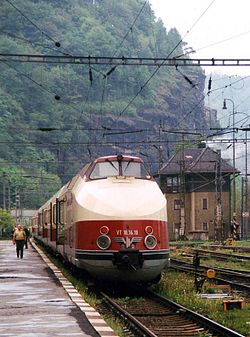 The German DR-Baureihe 18.16, one of the first modern express electric multiple unit trains.

The first train engines were steam-powered. They got progressively bigger and more powerful. Steam engines however had one major disadvantage, and that was the pollution they created, and the occasional forest fires they caused. That's why engineers began looking for alternatives. Diesel and electric power engines debuted in the 1890s, but their true golden era didn't come until the 1940s. Electrical trains became more common after the 1973 oil crisis.

(Europe:) While passenger trains existed before, the 20th century saw their greatest expansion, as people started traveling between towns for business, work or just for fun. Cities started developing suburbs, which resulted in the creation of light rail, subway or the commuter rail.

Later in the 20th century, first high-speed lines were built, connecting the most important transport hubs in shorter times. At first, they were simply upgraded regular lines with better tracks and modified terrain, but nowadays they're usually separate from the rest of the network. Some of the prominent high speed railways include the French TGV or the Japanese Shinkansen. Present day high speed trains can go over 300 km/h (185 mph.)

Why railways and where do they go 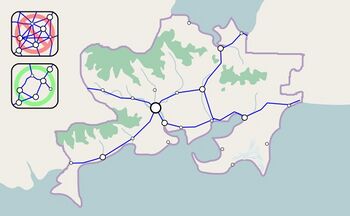 In a simplified way, there are two types of railway lines: main lines, which connect cities and major transport hubs, and branch lines which connect towns and industry to the main lines. It is fairly similar to the road network: for primary roads you have main lines, for secondary branch lines, and then you have high-speed railway which would be the motorways.

The picture on the right is borrowed from Help:Making realistic countries, because it says quite a lot. Imagine it shows the main lines in the country.

In addition, here is a railway map of the Czech Republic that shows the main and branch lines nicely:

Unsure if you should have railways in your country?

If you answered the majority of these questions yes, it's time to get down to business. Just like real world, each country here is unique. But everyone has an inspiration source, right? You may find a suitable one in the next section.

How railways differ around the world

Even in a globalized world, rail transport varies country by country. The most influential factors are pretty much listed above. Once again, that's population, terrain, and economy. It is useful to compare some of the real railways.

Note from Eklas: I live in Central Europe and my knowledge of railway systems in other parts of the world is limited. If you notice anything that's incorrect, or feel like something significant is missing, please put it on the talk page.

Europe is a major hub of railways. After all, it was England where first railways were built. Considering the population density, convenient landscape and the state of economy, it isn't very surprising that it's Europe which has the most extensive rail network. Even though some local lines, i.e. service in the countryside, were closed down in late 20th century, both regional and international passenger trains play a key role in Europe's transport network. Many European cities have a commuter or light rail system, transporting workers from the suburbs into the city. Freight transport is also present, mostly in the form of container-shipped cargo or bulk natural resources (coal, ores.) Railways can be found even in mountainous areas, such as the Alps. Switzerland has some of the longest railway tunnels in the world. High-speed lines are common in Western Europe, notably France. In Europe, tracks or railway companies are often state-owned to some extent.

While at a similar economic level, North America is sparsely populated compared to Europe. It then makes sense why railways are mostly used for cargo transport. North American freight trains are one of the longest in the world; they often have multiple engines and can span up to 4 kilometers in length! The cargo-transport system is more robust here than in Europe. Passenger transport, however, is much more limited in North America, if it even exists at all. Commuter rail exists in some larger cities, and intercity passenger rail is mostly confined to East Coast metropolises that are in closer proximity to each other. Mexico, for example, has no passenger service at all. North American railroads are usually private-owned (the state however funds regional passenger trains in Canada.) Central America only has some isolated narrow gauge lines that were built in the 19th century, most of the service has been suspended.

The situation in South America varies country by country. While Argentina and Brazil have some of the most extensive rail networks in the world, for example Bolivia or Peru have obsolete systems largely dependent on tracks and rolling stock from the first half of the 20th century. In other South American countries, lack of funds made the railways fall into disrepair.

While the north (e.g. Morocco or Algeria) have a modern Europe-like network, the larger portion of the continent only features isolated lines built in the colonial era. This might however change soon thanks to the Chinese investments in African countries. Funds from China helped open the new Addis Ababa - Djibouti line and others.

With the exception of Israel, the rail network in Western Asia isn't very profound. This is caused by the region's geography - most of it is covered by deserts or arid plains with almost no population. There are however some very promising plans for a new rail connection between Europe and China, which would run through Central Asian countries as well.

The Trans-Siberian Railway is the longest railway line in the world, spanning over 9,200 kilometers (5,770 mi.) It connects Moscow with Vladivostok, a city on the coast of the Pacific Ocean. Most of the Siberian population actually lives along the line. In addition to being an important trade route, the railway has become a tourist attraction.

Both countries feature the most extensive high-speed train network in the world. China has started investing in its railways relatively recently, with the average of some 1,000 kilometers of new railway lines opened annually in the 1990s - 2000s. Railways in China are used for both passenger and cargo transport. In Japan, on the other hand, freight trains are rare. High demand for fast, capacity connection between the large cities was one of the reasons behind the development of the high-speed Shinkansen train system. Japanese trains are famous for their punctuality. Some of the network is state-owned, but a significant portion has been privatized and rail companies belong to the most profitable in Japan.

Notably Indian and Bangladeshi railways are known for train surfing, i.e. people sitting on the roof or leaning out of doors and windows of a crowded train. And while especially the railways in India came a long way in the last 25 years, there still are problematic areas.

Even though plans for expansion and modernization exist, Southeast Asian railways are in general poorly funded, the exception being Malaysia and the city-state of Singapore.

Australia's rail network is largely similar to North America: while there is passenger service, cargo transport plays the lead role. There aren't any railroads in Oceania with the exception of New Zealand and minor industrial railways in Fiji and Nauru.

The journey of goods

Now that you have some idea about rail transport in general, let's look at the average journey of a product shipped by train. Consider this diagram:

Railway stations and yards are covered in a more detailed way in part 3.

set railway=miniature if you're into this kind of fun

Tagging railway tracks is relatively simple. Below are the basic parameters you can set:

Further information may be found on the OSM wiki.

Each week, there are going to be some tasks you can follow and practice your railway mapping skills. At the end of the month, you should have finished a short railway line with some stations, terrain features, bridges, crossings... this week, your tasks are simple: