Trinity Island (ˈtrɪnəti ˈaɪlənd), officially the Commonwealth of Trinity Island, is a constituent state in Southeastern Federal States. It is one of the smallest FSA state by area, with an area of 4101.76 sq mi (10623.51 km2), and also one of the least populous, with about 1.4 million inhabitants as of 2020. The state is named after the eponymous island, which constitutes a large part of its territory. Trinity Island borders on the Ardentic Ocean to the east, Passamaqueets and Thermond to the north, Astrantia to the west, Perchorsee Isles Nature Reserve and the Perchorsee Bay to the south. Worthington is the state capital and most populous city.

The state is named after Atwick Island, called in Colonial times as Trinity Island. The most widespread version of the origin of the name. The name is attributed to Charles Quentins, one of the first bishops of the Federal States, who argued that the name arose after having survived a terrible storm on the high seas and having miraculously arrived on the island. Andrew Fletcher, captain of the Atwick, attributed his arrival to the island to the prayer to the Holy Trinity that the religious group (led by Quentins) made a few moments ago, and therefore gave the island and the subsequent colony that name. The name was made official by Ingerland for the entire colony shortly after.

The name remained in use for the state after the independence of Ingerland, and it was also approved to name the main island as Atwick Island to differentiate it from the state.

Trinity Island is one of the smallest states in the Federal States. It is located in the Southeast Region of the country and has an area of 4,102 sq mi (10,624 km2). Several bays distinctly shape its coast. Worthington is the largest city, at the middle of the Atwick Sound and the mouth of the Green River.

Despite its small size, Trinity Island features numerous topographically distinctive regions. The Insular Trinity Island is composed of the 3 major islands of the state (Atwick, St. Mary and Holy Island) and other adjacent small islands and islets. The large coastal plain of the Ardentic Ocean and the Perchorsee Bay, known as Coastal Trinity Island, contains the major cities of the state (excluding New Atwick): Worthington, Port Eleanor and Wearhead. Most of the remaining zones are divided into two regions: the Autumn River Valley and the Foryoke River Valley, whose limit is bounded by the former Worthing and Wandsport counties border. Along the border with Thermond and a section with Passamaqueets is the Norottuck region, which includes the highest points in the state and the Trinity Island's section of Norottuck Watershed. 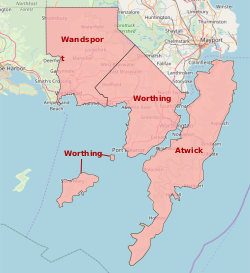 Map of the 3 counties of Trinity Island.

The capital of Trinity Island is Worthington. The state is organized into three branches of government—the executive branch consisting of the governor, the Governor's Council, the cabinet and other independently elected state constitutional officers; the legislative branch consisting of the Senate and the House of Representatives; and the judicial branch consisting of the Trinity Island Court System. The state also allows ballot propositions: direct participation of the electorate by initiative, referendum, recall, and ratification. All the state constitutional officers, including the governor and lieutenant governor, are directly elected.

Both houses of the Trinity Island State Legislature meet at the Trinity Island State House (map); in the center of the same building are located the governor's office and the Governor's Council seat. Most important offices of the state's executive branch are located in the James A. Sutton (map) and Charles M. Tremont (map) federal buildings. The Supreme Court (map), the Department of Justice (map) and the General Court of Worthington (map) are located in the Tremont Plaza, the center of the area known as the "Judicial Block" of Worthington.

The governor heads the executive branch. Its primary duties include lead the cabinet, signing or vetoing state legislation, filling executive agencies appointments, granting pardons, preparing an annual budget and commanding the Trinity Island National Guard. The executive branch also includes the Governor's Council, which is composed of three elected councilors (which also exercise as ex-officio chairs of the councils of government) and the lieutenant governor. The council provides advice and consent in all matters – primarily nominations, minor contracts, pardons, and commutations – to the governor.

In addition to the governor, lieutenant governor and the members of the Governor's Council, the executive branch is composed of a state cabinet appointed by the governor, and other elected constitutional officers: attorney general, secretary of state, comptroller, treasurer, insurance commissioner and superintendent of public instruction. All these officers serve 4-year terms and may be re-elected only once.

The Trinity Island State Legislature consists of the Senate (upper house) and the House of Representatives (lower house). The House has 53 members while the Senate has 22 members. The leaders of the House and Senate are appointed by the members of those bodies; the leader of the House is known as speaker while the leader of the Senate is known as president. Each chamber consists of several committees. House members are elected to 2-year terms, while senators are elected to 4-year terms.

Current composition of the State Legislature

The Charles M. Tremont Courthouse in the Tremont Plaza, Worthington.

The first level are the judicial commissions, the primary law institutions of each town (and borough in the cities) that consists of residents appointed by the town meetings. They have the responsibility to resolve conflicts between residents and formalize the actions of the town police. The second level are the general courts, which are the first penl level in the system. They are responsible for determining sentences, and evaluating the constitutionality and legality of the decisions of the judicial commissions. It is also the first level formed by justices and its jurisdictions can include several towns together, a single city or a city and several towns, which have to be under the same appellate court jurisdiction.

The third level, immediately below the Supreme Court, are the Courts of Appeal. With jurisdictions corresponding to the former counties boundaries, they are the primary appellate courts within the state. Same as the previous level, they are composed of justices that are appointed (like the justices of the general courts) by the Governor.

The councils of governments are regional coordinating bodies composed of all the mayors or town administrators of the municipalities of Trinity Island. The councils meet to discuss emergency measures, collective security threats, public works between municipalities and other measures that require the advice or consent of multiple municipalities. Councils are not a substitute for county governments, which were abolished by the state legislature in 1964, but are bodies that facilitate cooperation and provide synthesized demographic and climate data for the entire state. The councils are leaded ex-officio by the councilors of the the Governor's Council, the state governmental body that provides advice and consent to the governor. This dual membership of councilors in state and councils of governments allows better intercommunication and the improvement of government effectiveness.

Since the abolition of county governments in 1964, the 61 municipalities are the fundamental subdivisions of the state. According to the Trinity Island Census Bureau, based on the population of each municipality defined by the 2020 census, there are 49 towns (80.33%) and 12 cities (19.67%) in Trinity Island. The 12 cities have a mayor-council government, where there is a mayor and a city council directly elected by the voters; the 49 towns, on the other hand, have a town meeting system, in which most or all of the members of the municipality come together to legislate policy and budget for local government.

Trinity Island is considered politically liberal, with a significant minority of conservatives. Formerly one of the most conservative states in the Federal States, the state government was fundamentally led since its formation to 1960's by the Faith and Democracy Party (FDP), a conservative party based on the ideology of religious democracy. The inefficiency of county governments and slow economic growth led to the general victory in the 1962 elections of the Commonwealth Party (CP), a liberal party promoting a substantial reform of the state's political model and economic policy.

The success of the 1964 state reform, which abolished county governments and established policies to increase state's economy, represents the beginning of the state's transition to liberalism. The Commonwealth Party has been the state's main party since the 1960s, excluding certain periods in which the FDP achieved close victories. Current governor Diane Walsh and lieutenant governor Richard Evans, both sworn in on June 25, 2020, are members of the CP. The CP also holds a super-majority in both chambers of State Legislature. 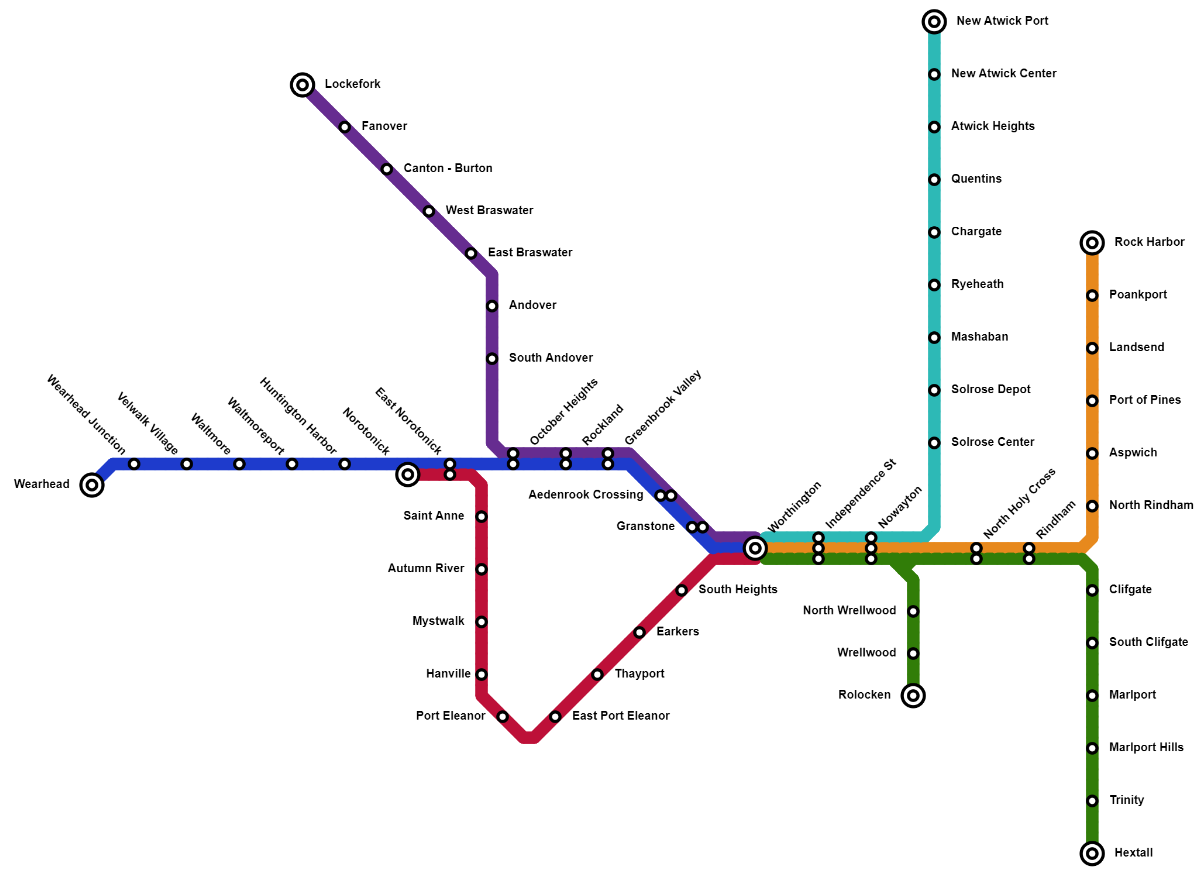