Bonavista (BON-ə-VISS-tə) is a sovereign island country in the Sea of Uthyra between Sowal and TA332. It consists of two major islands, Bonavista and Saint Isabelle, and smaller islands (including Asuncion, Brick Island, Charlotte Island, Guayacan, and Peacock Island). The permanent population is about 104,000 (2019 est.), with around two-thirds resident on Bonavista. The capital, largest port, and sole city is Victoria on Bonavista, with Port Magueriz being the largest town on Saint Isabelle.

The islands of Bonavista and Saint Isabelle were first settled by Hellanesians in 332, and were abandoned in the years following a series of volcanic eruptions from Mount Azufral between 411 and 414. No further attempts at settlement were made until the arrival of Castellanese settlers in 1585. The islands were captured by Ingerland in 1660, and remained under Ingerish control for nearly 300 years thereafter, save for a brief recapture by Castellan between 1721 and 1724. During this period, the colony operated on a plantation economy, relying on slave labour which worked on the islands' plantations until the abolition of slavery in 1831. Bonavista was granted self-governance in 1948 and full independence in 1957.

The economy of Bonavista is heavily dependent on tourism and crop exports. Bonavista is a member of the Assembly of Nations, Tarephia Cooperation Council, Ingerish Commonwealth and the World Organization of Tourism.

The earliest known settlers of the Bonavista islands were Hellanesians who established the small port town of Itipolis near modern-day Port Magueriz on Saint Isabelle in 332 AD. Several settlements were built across the islands over the following 80 years, with an estimated population of around 8,000-10,000. A series of volcanic eruptions from Mount Azufral between 411 and 414 destroyed much of Saint Isabelle and buried Itipolis under volcanic ash and debris. Continued volcanic activity forced the Hellanesian settlers to flee, and numerous eruptions witnessed by passing Arionic ships likely dissuaded further settlement.

Little evidence of Hellanesian settlement survived until the discovery of the ruins of Itipolis by a slave working a plantation in 1766. Subsequent excavations unearthed much of the town, and the area today is a Commonwealth Heritage Site and a major tourist attraction.

Ingerland had recognised the strategic importance of the islands after taking possession of the Cambria Colony in 1616. The multiple Castellanese colonies along the southern Uthyra posed a threat to the passage of Ingerish ships in the event of war, a threat which was realised following the outbreak of war between Ingerland and Castellan between in 1658. In September 1660, Ingerland attacked the town of Port Magueriz; the town was poorly defended and quickly fell, with the Castellanese population forcibly expelled four months later. Castellanese attempts to reconquer the islands were repelled, and in 1664 control of the islands was formally ceded to Ingerland under the terms of the Treaty of Magueriz.

Port Magueriz continued to serve as the principal town of the islands for some time after, however the confines of the terrain and the larger plantations on the island of Bonavista saw the development of the port town of Victoria, which was made the capital of the colony in 1728.

Demographic decline through the 1930s and 1940s and growing unrest led Ingerland to grant limited self-government to Bonavista on 1 May 1948, with the Bonavista Labour Party (BLP) winning the islands' first general election later that year. On the recommendation of the islands' governor, Ingerland granted Bonavista full independence on 20 July 1957. The BLP would continue to govern until it was defeated by the opposition National Party in 1971. 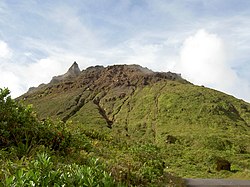 The highest peak in Bonavista is Mount Azufral at 1,078 meters (3,537 feet). Mount Azufral is an active volcano which erupts infrequently; its most recent eruption was in 1900.

Bonavista has strong bilateral relationships with Ingerland and Vodeo, represented by High Commissioners in Winburgh and Saviso. Bonavista also associates closely with other nations of the Ingerish Commonwealth and the Tarephia Cooperation Council.

Tourism dominates the economy, accounting for more than half of the gross domestic product (GDP). Agriculture and industry account for a moderate proportion of Bonavista's GDP. Agricultural produce includes fruit, vegetables, sugar cane, livestock and poultry, and industries include rum distillation, construction and boat building. Commercial fishing is also practised in the islands' waters.