As in the real world, nations in OGF exchange embassies to facilitate international relations. This page is meant to serve as a country by country guide to building embassies. On the country list below, please add countries in alphabetical order.

Don't start establishing embassies during your first week here, or even your first month. Make sure you're going to stick around for the long term. Take some time to develop the mapping in your country a bit, then reach out to others for embassies. There's no hurry. It's better to be the person who has no embassies for the first six or twelve months, rather than the person who builds embassies in tons of other countries and then disappears, leaving a worldwide mess for everyone else to clean up.

When you're ready to start building embassies, you'll need to think about where they'll go. Sometimes they are focused in a certain part of the capital, but more often they are spread throughout the city. Sometimes it is a mix of both, with a number of embassies clustered in one part of town, but many others elsewhere.

Not all embassies are created equal. Some are very big, for example the US embassy in Berlin: 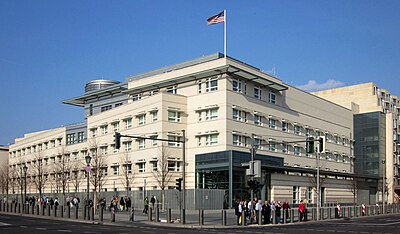 Others are very small, for example the Eritrean embassy in London:

The size of an embassy depends on several factors:

The size of an embassy is sometimes zero. Countries with small foreign affairs budgets (due to poverty or due to very small size) will typically have very few embassies. See for example see the lists of embassies for Iceland or Fiji.