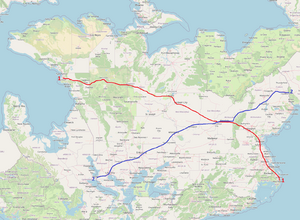 An idea I'd like to float to the larger group regarding the "early" motorways of the FSA. Currently, FS-1 operates "across the grid" from Burton through Stanton and up to Huntington, which was originally designed to be one of the early major travel corridors of the FSA (also why it is numbered as FS-1 and why the rest of the motorway numbers increase heading north and west out of the Southeast). But: what if we expanded this idea into a larger national concept? In this case, FS-1 would continue far beyond Huntington as a true ocean-to-ocean transcontinental motorway, heading west to Massodeya City and continuing beyond through the Massodeyas and through the mountains to directly connect all the way to Jundah-Stuart (basically replacing FS-60 from the Alormen River to the Asperic Ocean). Paired with this northwest-southeast corridor would be a totally new FS-2 "border-to-border" transcontinental motorway from Deodeca to Unesia via Lake City, Minneuka, Mass City, and Eustacia. With these two major motorways planned, the motorway system would've evolved to include the "grid" we've already approved and have been using to connect the rest of the country to these primary routes and connecting areas better on the regional level.

From a meta perspective, not much additional work would be needed in terms of creating new motorways. In some areas (like West Massodeya) the state motorway system would need to be reimagined, but in other areas (like the aforementioned FS-60 corridor) it'd only require changing ref=* tags on the existing motorways. (And, perhaps most importantly, in the densest part of the country, there'd be no changes required at all.)

This proposal could also be expanded as well: for instance, new FS-1 could continue up FS-91 to serve Esperanza, or there may be a logical FS-3 or FS-4 route if someone has a recommendation.

This proposal would not replace the existing motorway system, but rather supplement it. Likewise, since these routes are "diagonal" and criss-cross the country, they wouldn't need to fit as cleanly into the existing numbered motorway grid.

It doesn't affect Makaska, so I have no horse in that race. In general, I actually would encourage things that aren't direct OGF FSA clones of real-world concepts/ideas/places in the US - this proposal is that kind of thing, therefore I support it.--Luciano (talk) 14:59, 8 July 2022 (UTC)

Sure. Only thing is while I can absolutely see FS 1 being a historic route, i'm unsure about specifically Hazelboro to the Lakes. I guess it'd be a modern creation- perhaps the historic terminus was along the coast? I'm also pretty sure it'd hit Adamsville and Casper instead of Morgantown, since Adamsville has a rather large metro population and it's closest to what me and him had been planning previously. I'll bring this up on the Eastern Server to get everyone's thoughts in my region.--Fluffr Nuttr (talk) 18:39, 8 July 2022 (UTC)

The routing within Eustacia would of course be up to the Eustacia mappers. If those mappers (and Ogdalen) would prefer a more southern alignment that swung south of Lake Fisher and went through Laine and crossed into Unesia via Eleana – or just ended at Orterrado instead without entering Eustacia at all – that’d also be feasible. -TheMayor (talk) 19:09, 8 July 2022 (UTC)

In Olselen it serves as a North-South cutting through the Praxton area. However FS-11 is connected to FS-1. So in theory would I need to split the two highways or no ? - The Torontarian (talk) 07:03, 9 July 2022 (UTC)

Response to Fluffr: I wouldn't view FS-2 has a singular historic route. A route from the northeast/coast to Huntington would have been an important historical byway, as would the connection from the southwest through the prairie to Mass City (effectively connecting to Huntington). So, in a way, FS-2 is really a merger of two routes along a single number for ease of naming. — Alessa (talk) 15:48, 10 July 2022 (UTC)

In this case, would it make more sense to cut FS-2 as just the Lakes-Mass City route and make a new FS-3 that’d run Eustacia-Huntington? As sketched Mass City is the “nexus” of the routes, but historically it may make more sense for Huntington to be the hub, and a long concurrency of 1 and 2 between Huntington and Mass City may not be terribly efficient. -TheMayor (talk) 17:16, 10 July 2022 (UTC)

Doing this, as Luciano said, is a nice departure from the US model that isn't too abrupt and easy to implement. I really like that it solves the numbering issue we're having with a cohesive route from the southwest to Mass City, which under our current grid system would require up to three different numbers for the same route. I'm also in favor of the changes in West Massodeya, as it is a good option on that state's end. — Alessa (talk) 15:52, 10 July 2022 (UTC)
I can see FS-1 being a major important link for our country, as well as a fairly original/unique idea like Luciano mentioned. In my opinion, FS-2 seems to not make as much sense past the lake cities, but it helps connect the FSA to Unesia which I assume provides a great opportunity for trucking services & tourism, and there are still a few more cities along the path past the lakes. I think it's important to situate the towns & exits along the highways given extensive historical and topographical knowledge that would make them feasible and fitting. Additionally, given these highways cross so many states with different mappers and mapping styles, we could make an effort to unify the style or dedicate a few mappers to mapping it if that's relevant to y'all. If this gets mapped, let's map it well!! :)) -CharlieG (talk) 14:11, 11 July 2022 (UTC)

> "In my opinion, FS-2 seems to not make as much sense past the lake cities"
Can you clarify this thought a bit? From Lake City to the Deodeca border is only about 90 mi/140 km, comparable to the distance between New York City and Philadelphia. If you're saying FS-2 should end in Lake City and not go to the border, so be it, but that'll be a motorway link anyway (already mapped) so I'm not sure why FS-2 wouldn't just continue to the border. --TheMayor (talk) 14:43, 11 July 2022 (UTC)