Based on some ongoing conversations and previous forum thread regarding FSA time zones, I'd like to offer up the following five options for discussion. Based on OGF's general consensus on time zones, WUT+0 is located between 0° and 15°E, WUT+1 is located between 15°E and 30°E, etc. Following the lines of longitude rigidly would result in the FSA spanning from WUT+8 (120°-135°E) to WUT+10 (150-165°E). However, given the narrow sliver of the nation that would actually be in +8 and since time zones tend to skew to the west (since western skew allows for "longer" days with later sunrises and later sunsets), it's reasonable to assume the farthest west time zone in the continental FSA to be +9. 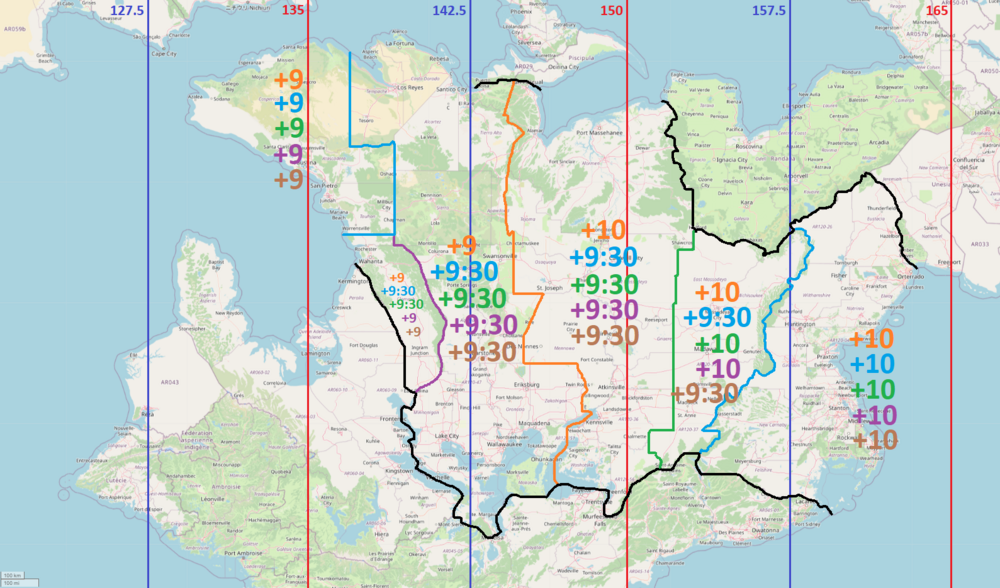 The entire FSA would be divided into two time zones. As drawn, the only state split would be Alormen, through the mountainous panhandle which is relatively unpopulated. The Alormen Valley, an important shipping corridor dotted with cities along both banks of the river, would remain in a single time zone. (This is maintained for all options.) This plan would split the West Lakes and East Lakes into different time zones.

All other options have three time zones, introducing a +9:30 zone in the center of the country.

The "Max 30" plan would put a majority of the country in the +9:30 zone, except the extreme northwest (Cosperica, Atascadera, and most of Tauhon in +9) and the East Coast (+10). This may be historically justified by the FSA railroads, as this plan allows both historic transcontinental railroad corridors (Massodeya City-Puerto Eloisa and Lake City-Wahanta) to each be in a single time zone.

The "Eastern Influence" option would expand on the "Transcontinental" plan by expanding the +10 zone further west to bring Massodeya City, Madawan, the Great Canal, etc. into the same time zone as the East Coast.

The "Western Influence" option builds on the "Eastern Influence" plan by likewise expanding the +9 time zone to encompass the entire West Coast, including all of Clamash.

The "Alormen Valley" option is a variation of the "Transcontinental" and "Western Influence" plans, where the time zone lines are drawn using both sets of mountains to minimize disruptions to individual states and urban areas.

Interested in everyone's thoughts. If we can't come to consensus on this through forum discussions, we can add a final proposal to the next omnibus ballot in August. -TheMayor (talk) 20:59, 25 April 2022 (UTC)

I'm fine with anything that doesn't involve :30 offset time zones. It seems like a practical pain, especially since other countries in the same latitude won't use it, and it seems like something that would popularly be perceived as needless specific and weird (even if it might make some sense). Either orange or another proposal with +8 (which seems to be marked as +1 on the map? - maybe I've misunderstood), +10, and +9 zones feels like it makes the most sense to me. --Lithium-Ion (talk) 21:43, 26 April 2022 (UTC)

I prefer the Orange Two Zone System, it looks realistic, simple and avoids the 30 minute split. To me including a half hour into the scheme adds complexity for little benefit. If Orange is the option people go with I'm happy with dividing north-east Alormen between the two zones. Ruadh (talk) 07:50, 27 April 2022 (UTC)

Personally, I have less of a problem with the +9:30 zone, given the economic regions that are present. I think a society that opted to use this instead of just hours is equally plausible, given that every city would have had its own local time until standardization. The Alormen River and its main tributaries are effectively in a zone together, as would the southwest, northwest, and east coast. To me, that's the main advantage of a three-zone system. Plus, it allows even less disjunction between zones on a commercial level. My personal preference is for the blue division based on this. (I could see an instance where Clamash splits so that Wahanta is in +9 and its interior is +9:30, but that would be up to Glauber to flex as he sees fit.) I see no connection between the east coast and anything west of the mountains from an economic or social standpoint. Massodeya City is just as much "over beyond the mountains" as anything else west of them. >
That said, I understand the two-zone division and would be able to work with it. If we go with it, I prefer the awkward alignment of using the green boundary if Toadwart is okay with splitting his state. That preserves the majority of the Alormen Valley with the southwest and northwest. Should we use orange, Mennowa is put in an interesting situation that it invariably would not like from an in-universe perspective (think nearly annual Indiana time-zone fights in the state assembly) because it is far more tied west than east. This isn't to say that I'm against it, but it adds another dynamic to the state would almost assuredly cause me to split it between the +9 and +10 so that Des Nonnes is in +9 and Minneuka is in +10. I'd have to think about it. — Alessa (talk) 14:02, 27 April 2022 (UTC)

Yeah, the Alormen River valley in my opinion makes any two-zone solution tricky given domestic travel patterns and commercial regions. While not elegant, I think the +9:30 zone alleviates most of these issues and avoids splitting any existing cohesive regions. -TheMayor (talk) 14:37, 27 April 2022 (UTC)

Another plus point for the green line is that it uses the international border with Randalia for much of it's length.Ruadh (talk) 18:36, 27 April 2022 (UTC)

I will agree with Ruadh and also Alessa here, i like the two zones, i think FSA can manage with those two. From a Sierra perspective the orange line is fine since it avoids the problems of dividing the time zone at the Alormen issue but also the green line would be fine to divide east and west. Plus it makes sense if a few of the states between the Massodeyan (east) mountains and the Alormen associate more with the west than the east. Brunanter (talk) 03:00, 28 April 2022 (UTC)

The two time zone is simplest but not very interesting to me. With respect to Clamash, would like it to be in the same zone as RS, AQ, and western Sierra. Southern and Central Clamash at the very least. Wahanta would be better in the same zone as Juneau if CL needs to be split. Glauber (talk) 4:27, 30 April 2022 (UTC)

In my opinion, I think that the orange option would be the best choice. Like Lithium pointed out, the :30 offset would be confusing and difficult to adjust to for anyone who travels across the FSA. Although two timezones appears boring at first, it would make it easier to figure out times for different cities. Returning to my point about travel: it could make it easier for shipping/air travel to predict ETAs, and would require less hastle with timezone conversions. If I could suggest that the orange could be "amended:" is it possible have the far eastern (timezone line on the 157.5E meridian) could be it's own time zone? It does exceed the 15E "threshold" that is used, and it could make the +10 timezone too big. This may be an obsolete proposal though, as there are quite a few exceptions to what we see in the real world. Thoughts? Geoc3ladus (talk) 03:29, April 28, 2022 (UTC)

In thinking about it more, I do agree that orange is probably the best choice if we are going to use two zones only. I still maintain that three is better, but that's just because I don't think a :30 offset is that big of a deal just like a :60 offset isn't really for people that are used to it. — Alessa (talk) 14:45, 28 April 2022 (UTC)

Just for perspective, I compiled a table of sunrises and sunsets in select cities for the extreme days (longest/shortest) for the year. I recognize that the times might look early for summer sunrise, but I did not include DST for the December dates. I'm pretty certain many places would use it to avoid the sun rising as early just like most places in the US do, but I kept it neutral for now.

As a technical note: since we use time zones that are 7.5° offset from the real world, location times were calculated with a 7.5° shift to accommodate more accurate distances from the natural time-zone boundaries.

Here are a few select US cities, although it's not entirely comparable as US time zones blur very far west. Columbus, Ohio would be solidly in Central Time if the raw time-zone boundary were followed, but Eastern Time continues for more than 250 miles westward to the Indiana/Illinois line (along most of its length). This is a comparable shift to what is being proposed with the orange line in the FSA for states like ME, OQ, TJ, and AL. I've included a few of these wonky cities (Atlanta, Boise, Detroit) just to show the perspective of how much shifting the time zone west distorts the data. Also, I did not include DST for summer, since it was not included in the FSA table. All cities here do use DST, however, so that impacts perception to a point.

I think these tables may make a stronger case to have a +9:30 zone: note that in the list of American cities, the earliest sunrise is after 5am in only two instances (Atlanta and Boise), while there are many cities on the western end of the proposed +10 zone (including major cities like Andreapolis and Minneuka) where that occurs. We may end up with a defacto three (or four) time zone system anyway: Stanton (not listed, but I looked it up) would be a prime candidate for daylight savings time -- without DST on the longest day of the year the sun would set at only 6:50pm -- whereas DST in Andreapolis means on the same day the sun wouldn't rise until 6:28am, which would make DST there far more unattractive. A +9:30 zone would better balance the metro areas across the nation (and looking at the table, could even argue for a +8:30 Cosperican time zone again for Esperanza.) -TheMayor (talk) 16:25, 28 April 2022 (UTC)