Since we're starting afresh with the new wiki, one of the things I would like to bring up is the two systems of airport codes that we have (WAAT and ANACA). I understand that in the real world we have IATA and ICAO that both have listings of codes (not to mention internal codes used in larger jurisdictions like France, Russia, and the US). Looking at the history of how these codes developed, my feeling is that it happened more through bureaucratic means with a small intent to create regional divisions. My feeling is that, for much of what we do, the systems are basically redundant. Yes, I recognize that their usages in the real world are slightly distinct, but this is only because organizations have kept them that way. They didn't have to evolve into distinct entities.

Do we really need to copy the real-world parallel here? I'm open to ideas as to why we could or should, but I'm wondering if a four-letter system based on regionality (as an example) might have developed naturally early on. The three-letter code grants us over 17,000 options globally; doing a four-letter code grants those 17,000 options for each region. This means we're unlikely to run out anytime soon on either system.

Thus, my proposal is two-fold: if there is a desire for a regionally-oriented airport code, then we should default to the four-letter code altogether; if there is not, then we default to the three-letter code. I personally don't care which way we go, but I don't believe it is necessary to have two systems in place.

Thanks, everyone for your feedback! If there's a consensus starting to form below, we'll proceed accordingly. — Alessa (talk) 17:35, 23 November 2021 (UTC)

UPDATE (27 December 2021): The community has voted to use three-letter codes for commercial airports. This does not affect general aviation airports, military airports, or any further decisions about integration with rail or other modes of transport. (The previous discussion is logged on the talk page.)

I would like to continue the discussion about how we should handle airport codes but break them up into two larger conversations. — Alessa (talk) 03:35, 28 December 2021 (UTC)

General aviation and other airports

One idea that has come about was to use some type of designator with numerals to mark general aviation airports (e.g. 2GK). I wonder how much we would need to micromanage GA airports in general. I can't imagine a 2GK code in the eastern FSA impacting even a potential 2GK being used in Mecyna. General aviation airports generally don't have the range that other airfields. Thoughts? — Alessa (talk) 03:35, 28 December 2021 (UTC)

Maybe a country-by-country system? So - Mecyna and the FSA could both have codes that are the same, but there couldn't be two airports in Mecyna with the same code. I like designating them with numerals, though. Alternatively, a letter prefix like G could be an option (G-GK) --Lithium-Ion (talk) 13:35, 28 December 2021 (UTC)

I tend to agree with Lithium here, we should give countries latitude on how they want to handle GA airports. Any system that doesn’t use three letters that can be confused for a commercial airport should be allowed, in my opinion. —TheMayor (talk) 16:05, 28 December 2021 (UTC)

Let's also continue the discussion about integration with other modes of transport, such as using the previous suggested XLCX for HSR access at LCX. Thoughts? — Alessa (talk) 03:35, 28 December 2021 (UTC)

The system should be a parallel to the aviation system, with station codes used to identify train stations that offer international service, or that somehow link up to the international aviation system. Since that definition can get quite broad (e.g., every FSA passenger rail station would qualify as long as a single station has transfers to an airport), it makes sense to use four-letter codes since we’d need the capacity. That said, since you can’t take a train from Archanta to Antarephia, there’d be more tolerance for duplicating codes internationally. Once again I’d say that the precise format should be up to the individual nations with some loose rule about duplicate codes (maybe codes can only be reused if the stations aren’t within 4000km of each other or some other qualifier to ensure they can’t be confused), but I stand by the idea that combined airport/railway stations should have an international standard of “X***” with “X” denoting a transfer station and “***” as the three-letter code, and with no other stations permitted to have a leading letter of X. A reserved leading letter is more logical than a trailing letter given computerization and being able to quickly identify transfer stations. —TheMayor (talk) 16:05, 28 December 2021 (UTC)

Makes sense. I'm guessing "combined airport/railway stations" would specifically refer to ones that serve the airport terminals somewhat directly? Quentinsburgh & Jhuandan's airports technically each have 2 intercity stations, a "terminal station" for terminating trains/special airport services and an "airport transfer station" for trains that connect but continue beyond the airport. I'm guessing the "terminal" one would get the X*** treatment and the airport transfer would just get a different code? --Ernestpkirby (talk) 03:12, 29 December 2021 (UTC)

I’m a bit confused why one airport would have multiple, separate direct-connection train stations, but the X-coded station should be whichever is more commonly used for longer-distance/intercity or international train services. Services that wouldn’t offer integrated ticketing or connect to only minor destinations (e.g. commuter rail or metro) wouldn’t need a station code. —TheMayor (talk) 03:46, 29 December 2021 (UTC) 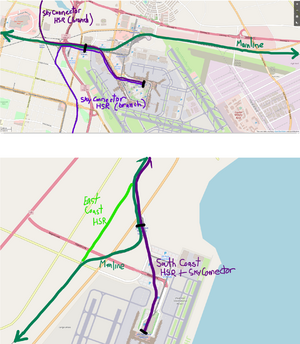 Routing of intercity trains at QBX & JIX
It's mostly due to the shape & locations of the airports. Both are alongside routes that need to continue past the airport. There are longer-distance/intercity trains that terminate at the terminals (as well as some regional rail routes), but since tunneling under/through the entire airport would have been insanely expensive through-routed intercity trains stop at the transfer station instead of diverting entirely to the terminals. --Ernestpkirby (talk) 04:18, 29 December 2021 (UTC)

That’s pretty unusual and I imagine it’d be pretty confusing for passengers trying to determine which station they need to use based on which train/destination they’re connecting to, but the point of the X*** system would be that it’s immediately apparent which train stations serve which airports, so I suppose you’d be able to choose which station got the X-code and which station had a different code. —TheMayor (talk) 14:20, 29 December 2021 (UTC)
In these cases I’d suggest using the “remote” station as the X-code since all trains that terminate closer to the airport also serve the remote station, so any rider confusion would only result in an unnecessary shuttle trip to the remote station rather than potentially missing their train at the terminal. —TheMayor (talk) 14:22, 29 December 2021 (UTC)
Another possibility – and what I think would be the ultimate preferred solution here – is to present both stations as a single, unified facility. Just like how airports can have satellite concourses, both parts could be considered “XQBX” or whatever, with Platforms A/B/C adjacent to the terminal and Platforms 1/2/3 out on the main line, connected by whatever airport shuttle system you’re using. —TheMayor (talk) 14:52, 29 December 2021 (UTC)

FYI there's a list of real world stations with codes: https://en.wikipedia.org/wiki/List_of_IATA-indexed_railway_stations. Here you can see they simply use 3 letter codes similar to airports. In fact, it frequently happens that the airport stations themselves have the same code as the airport, which makes sense imo. But I guess that a trailing X could also do the job. But what's more important to discuss is how you would code the stations that are NOT near an airport but are destinations you can reach and book connections to with your airline ticket. Would you use just any 4 letter code for that? Because tbh, I would rather like to see 4 letter codes reserved for general aviation airport's codes, than rail stations. It makes more sense to have every country set it's own technical rail station codes but use a standardised airport code system for GA airports too, than the other way around. In the real world it also works this way by default with the ICAO codes (which we decided to merge with IATA codes into one) for all airports big and small, and only a very small minority of railway stations also get an additional airport code on top of their national codes. The logic being that railways are managed highly independent in different countries (standardisation in the railway industry is almost non-existent, even despite big efforts), while aviation is usually far more standardised and international. Even general aviation airports frequently have international flights, especially when countries are smaller (which is something the OGF world has a lot more of than the real world, to the point you can consider this as being default).

So in conclusion, I think 4 letter codes should in general be reserved for the smaller airports that don't deserve a 3 letter code. It is more important to have most of the codes for GA airports and the like rather than rail stations, but stations could maybe get a subset of those 4 letter codes reserved for them. I would propose to reserve all X*** codes for airport rail stations, and then have Y*** for all other major rail stations (similar to real world stations with an IATA code predominantly starting with Q, X or Z). Only the largest of rail stations that are actually bookable as part of an airline ticket should get these codes, just like in the real world. Small airports can then use every 4 letter code except ones that begin with X and Y. This way, I think we can solve both issues at once. Squizie3 (talk) 17:51, 1 January 2022 (UTC)