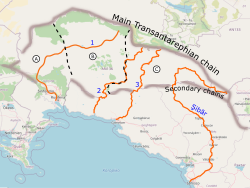 AN136 is a rather large territory in north/central Antarephia (534,147.49 km² / 206235.50 sq mi). It is conveniently located north of Paxtar. Along its northern border runs the main Transantarephian mountain chain from which 4 reasonably large international rivers originate: 1, 2, 3 and Şibār. 2, 3 and Şibār (upper valley in AN133) empty in Paxtaren territory.

To provide Central Antarephia with more "available" territories that would not qualify as "For advanced users only" because of their size, I would like to hear ideas from the wider OGF mapper community on how to split AN136 into 2 or 3 (maybe 4?) territories? Local topography would left to territories' owners to decide. Personally, I read this region of the map as being either some kind of Central Valley, milder parts of the Colorado Plateau or Great Basin, or various combinations of both.

It's difficult to divide the territory like that in a way that is reasonable and awaking the imagination. Square, land-locked territories are probably least desired by users. By putting the borders on the rivers (but not exacly) I think I created the area which "speaks" to the future owners' imagination while still preserving the basics original geography. Additionally borders on the rivers are probably best way to divide the country which is mostly flat and without forests. AN136d is optional however, as some people may say the city state would be a bit against verisimilitude there, given the continental history (mostly colonial/native non-Ulethan?). Rustem Pasha (talk) 15:42, 13 February 2022 (UTC)

Hi Rustem, thanks for this well-documented reply. Actually, modern Taukan countries (the regional native cultures) developed from city-states so it would be definitely appropriate if one of these didn't merge with its city-state neighbours and has remained as such or the size of a European microstates (no idea if something the size of Luxembourg is still considered a microstate?). --Aiki (talk) 16:19, 13 February 2022 (UTC)