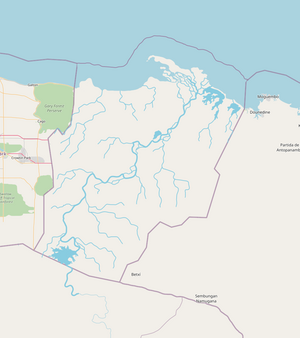 The coastline and hydrological systems of Telektebu

The river mouth of the Sungai Lodak / Great Silt River forms the central part of the country and is the most prominent geographical feature. The estuary of this river is large and the sheltered bay it created allowed for human settlement to be safe from ocean currents and high waves. There are two major coastal lagoons (near Fredericktown) that are part of the Lodak river system. The country is dominated by the jungle rainforest of the inland. These rainforests sit upon minor hills that reach up to 800 meters in some areas. The coastal areas and the Lodak river valley are some of the only flattish ground and are the areas where human habitation and agriculture persist. The climate will be of Af or Tropical rainforest: dominated by intense monsoons and relatively stable average yearly temperature (of around 25-28 degrees). Mangrove, wetlands, grasslands, meadows, and dense forest will be aspects of the landcover. 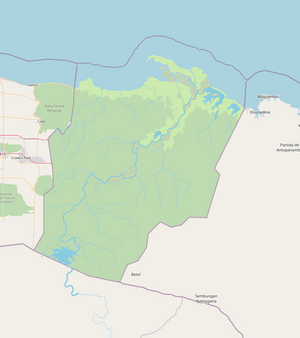 Natural landuse of the country

The country's small size and large portions of inland jungle territory mean that over 90% of the population live somewhere along the coast. The capital, Bandarbaru, is the center of the country's politics, commercial activity, and services. It will have a population of around 100,000 people. Fredericktown is a secondary, smaller port that focuses more on fishing and agriculture rather than Bandarbaru's mining and textile exports. It will have a population of around 20,000 people. Inland, over the last decade or two, economic development and incentive to push further inland in order to access mines and farm palm oil has formed a new settlement, the town of Tumut. This is the third-largest settlement and will have a population of around 10,000 people, majority being workers employed by companies. Land use will be mainly for plantations, sugar cane, palm oil, rice, tropical fruits, and some animals. As the country is currently seeing a rise in economic development, industrial land uses like ports, mines, railways, and factories are plopping up around Bandarbaru. The mapping style will be mainly based around the Guineas in South America, Brunei, some parts of Malayasia, and some parts of Gabon.

There is a large man-made lake at the very southern border, which is part of a complex dam project which aims to reduce power costs in the country and manage the variable flow of the Lodak. Overall, it will have a population of around 190,000. The economic development of the country is mainly driven by the mining and agricultural sectors, which cause great damage to the natural environment (there will be several large national parks that protect some of the areas of jungle). Infrastructure will involve mapping the depots and mines, the roadways/railways that bring resources to the ports (Bandarbaru and Fredericktown), and then the ports for exportation. The country, once poorer, is currently undergoing a period of intense economic development, with the main highlight being the construction of a major dam in the country's south. 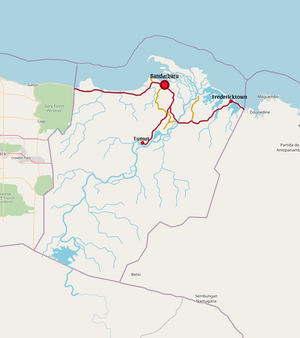 Location of cities and major routes

After discussions with oneofbeatlefan, the indigenous culture of this territory will be Malay-inspired (likely originally from Majesia). There will be slight African lingustic influences to the east of the country, mostly limited to the near-border. The history (also suggested by oneofbeatlefan) is that the country was originally a trade-focused Majesian sultanate. Because of this trade focus, the Ingerish were eventually led to the small sultanate and quickly established a colonial trading outpost (now Bandarbaru). Over time, the two cultures filled out the territory and now Telektebu is defined by the 'Ingerish elite' and the poorer, but more populous Majesians. It is suggested that the country could even be a part of the Ingerish Commonwealth too. Places near the coastline are more likely to have Ingerish names (although this is mainly restricted to major landmarks and towns). The inland of the country will feature small, rural communities. The culture will be interlinked with the wild and remote natural beauty and the mixed Ingerish-Majesian influences. The country is currently seeing a social change through increased representation of the majority Majesian class in national politics. Telektebu will be a medium-HDI country with strong ties to both Majesia and the Ingerish Commonwealth, the lower HDI mainly representative of the mid-level economic development and social problems.

Imanic (Islamic) will be the main religion of the Telektebu/Majesian people. The Ingerish elite have brought a minor amount of Christic influence but Imanic remains the most practiced religion in the country.

After careful thought, I think it would be best for me to use this territory application as an exchange for Lutecia. With Ingerish Asperia providing my outlet for Australian/NZ style-mapping, the difficulties of mapping in French and the larger area I have to map outweigh its worth. I would like to able to move some of its mapping to my other territories. I look forward to hearing from you. (I would like to keep the Federation aspierenne indiges as that is a unique mapping experience that I do have plans for)

I have now merged AR047 into AR005∈⊾ and transferred your ownership to it. Please confirm the previous mapper has completed moving any mapping they wish to preserve before clearing/modifying it. Thanks/wangi (talk) 22:40, 28 August 2022 (UTC)