Kastichetshan (CAST-ee-ketch-on) is a small province within the Dominion of Deodeca. Kastichetshan sits within a temperate oceanic climate, with some northern areas of the province sitting within warm subtropical climates. As for topography, Kastichetshan features tall and rocky mountains on the western borders. Moving northeast, the land changes from tall mountains, to low rolling hills, where agriculture is present. Provided in the sketch below, there is a basic plan on natural cover and rough topography for Kastichetshan: 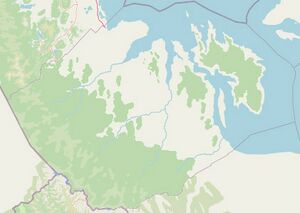 Kastichetshan features a few major rivers, with the headwaters originating from the rainy mountains. The rivers feature prominent and thriving agricultural regions along the Trans-Deodeca Route 1 (TDH-1) corridor. 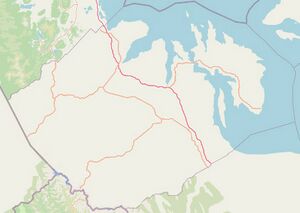 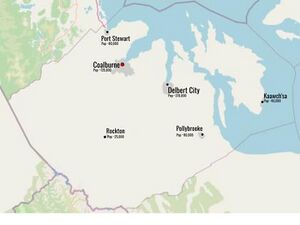 A majority of Kastichetshan ‘s population will live in the major urban centers that are shown above, most people living within Coalburne or Delbert City, and/or their respective suburban areas.  The second majority of population lives along the TDH-1 corridor, given that TDH-1 is the biggest transportation corridor within Kastichetshan.  Since Coalburne and Delbert City are set along the ocean, they could be potential areas for nautical ports and industrial commerce. Because they are also served by the Trans-Deodeca Highway System, they could also be potential shipping hubs within the region, especially Coalburne, with their industrial businesses and nautical shipments. The island off of the mainland, as per KAB’s suggestion, will be an island with many native reservations, with their largest city, Kaawch’sa. Many of the natives who reside on this island will mostly be classified under the Penutian tribes (I haven’t devised OGF names for any of the Penutian tribes as of this application). The rural mapping style will be inspired by rural areas of Australia and Alberta/British Columbia/Saskatchewan, considering the region Kastichetshan is in.

Here is a small collection of my past mapping. I will reference some of it, as well as other samples that I have not provided, in some areas around Kastichetshan.

That works for me. I'll close this application for now, with the understanding that you'll resubmit down the road once you've made more headway on Nayina. (You're welcome to reopen the application at any time, especially if you change your mind and choose to request a swap instead.) --TheMayor (talk) 19:51, 11 August 2022 (UTC)