This is an application for the claiming of AR908, AR911, AR912, AR915, AR916, AR921 – Greater Bai Empire, Kanglapo and the Principality of Kinglavia. Following the previous failed application, I decided to flesh out the entire proposal in full, of the greatest extent of the Bai Empire.

Map of Greater Bai and Kanglapo (eastern half of AR915). Kinglavia, the size of Andorra, will be located around here.

The northern coasts of the Bai Empire will be subtropical and humid (something like the coastal areas of Southern China), while inner Bai Empire (AR912, AR915, AR916 and AR921) will be more tropical. AR921 might actually have dry grasslands and have a more arid climate, while AR912 might also have fertile plains for farming. AR915 and AR916 will have bamboo forests and large plains for rice farming. Large parts of the existing rainforest cover will be kept, with the exception of the portion separating AR912 from AR911. The forest covers might be shrunk as Bai develops, but the general shapes will retain.

I have discussed with Coshatiuav and the users of Huaxia (through Kengoman) on our borders.

As also seen in the attached image, human settlements will generally be along the rivers and coasts. AR912 and AR921 might be more sparsely populated compared to the rest of the Empire. The more urbanised cities will be located in AR911, with a Shanghai-esque city located at Louy.

For Kanglapo, its capital Nandacheongfu will be located at the south at existing Donalou. Nandacheongfu will be another major city in the region, to be inspired by Seoul and Tokyo. The rest of Kanglapo will have a more socialist-planning style to reflect the existing communist regime of the country. As AR915 and AR916 was once under a Bai communist government, the cities will share similar layouts with Kanglapo.

For the rest of Bai, the towns will be mapped in a similar style to South Korea, Japan or Taiwan. The settlements of Bai will be connected with an extensive rail network, with HSR lines serving the major cities along the coast and connecting all the way to Grinzez. Joint rail links will also be made with Kanglapo and Huaxia. 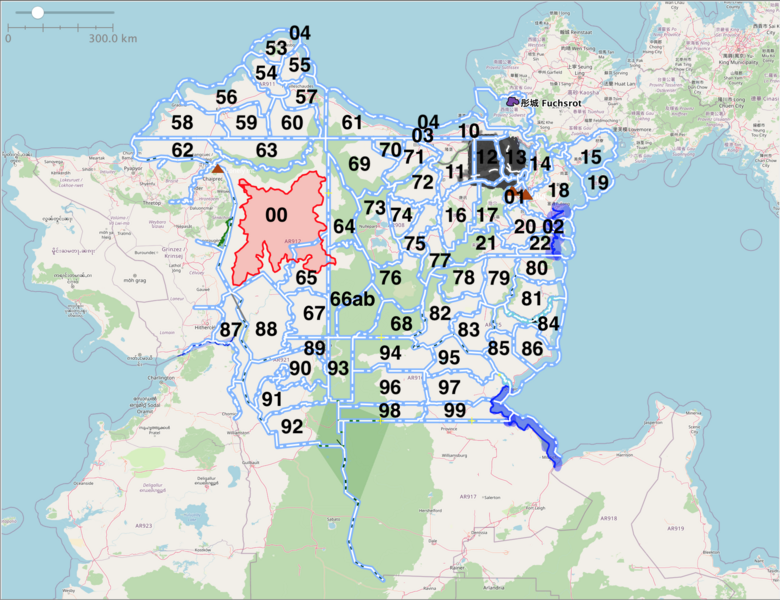 This is a sketch of the provincial divisions of Greater Bai. This might be subject to changes, given it was an old sketch by The Cute Chick.

Much of the Bai Empire will be Chinese-speaking, with closer leaning to Southern Chinese cultures and dialects. Teochew and Hokkien will be spoken along the northern coasts, while AR915 and AR916 closer to Huaxia might be culturally closer to Sichuan.

As said about AR921, it might be a buffer language zone between the Southern Indian speaking nations and Bai. Burmese might be proposed, and I find it does make sense given the neighbouring culture of Grinzez and Nakah.

Kanglapo (the eastern half of AR915) speaks a unique conlang inspired by various Asian languages (Thai, Korean, Japanese), with a slight Slavic twist due to its past occupation by Suria. The language will use the Tai Le script. Examples: ᥐᥣᥒᥘᥣᥙᥨ Kanglapo; ᥢᥢᦡᥓᥥᥨᥒᥜᥪ Nandacheongfu; ᥛᥤᥒ ᥔ ᥞᥤᥒ Ming Sa Hing

Other early sketches of Kanglapo (will be adapted for AR915 region)

As the Bai Empire at the moment still doesn't have that many contributors, it will remain as one enlarged collab, less formally managed. Kanglapo and Kinglavia, however, will be personal territories of mine and isn't exactly part of the Bai Empire collab.
I still plan to engage with a couple of Huaxia mappers to draw more users into the project, and also people from OSM Taiwan. The Huaxia mappers, from what I heard, decided to set up their own separate project because they are unfamiliar with this Bai project mapping style (more closer to Taiwan/Japan than on the mainland which is more socialist planned). Still, they might take an interest in the border towns between Huaxia and Bai.--Zhenkang (talk) 01:36, 28 June 2022 (UTC)

By the way, Huaxia will be submitting their application soon. The Bai collab page is up to date (without accounting for expansion yet) and the talks on border changes are on going with Huaxia and Grinzez. As well, along with Grinzez border change, I am talking with coshatiav about slight border change with Nakah as well, but that's not very relevant in this discussion. --Kengoman (talk) 06:02, 28 June 2022 (UTC)
From the descripitions provided, would AR921 be better off as a separate SEA-themed country? It has great potential given the right user(s). It's also likely I'll request two Bai coastal provinces bordering Grinzez so as to develop a more cohesive history there. Coshatiuav (talk) 06:22, 28 June 2022 (UTC)
As we discussed on Discord, AR921 will end up like a sort of Yunnan Province where people are actually SEA but are integrated into China itself. I think this has potential to be interesting where all mapping is in Chinese but the culture is SEA. As for province assignment I think this will be a long discussion later because of the sheer amount of naming that needs to be done. I also propose consolidating some provinces so there isn't too much administrative work to do. --Kengoman (talk) 06:49, 28 June 2022 (UTC)