The Ingerish Commonwealth, also known as simply the Commonwealth, is an intergovernmental organisation of numerous member states that are mostly former colonies and protectorates of the now-defunct Ingerish Empire.

The modern Ingerish Commonwealth evolved out of the Ingerish Empire, which by the early 20th century was evolving into a free association of independent states with shared bonds of history, culture, and language. As early as 1907, the Ingerish Government had granted de-facto independence to her dominions such as New Ingerland and Vodeo. These states retained the Ingerish monarch as their head of state but were in all other aspects fully-sovereign states. The remaining colonies and protectorates of Ingerland were slowly granted their independence other the coming decades, commencing with Elhádhon in 1911, and ending with Glaster in 1982. Some kept the Ingerish monarch as their head of state, but most did not, leading to their exit from the Imperial Conferences.

Driven by a desire by these newly independent states to continue their participation in a global forum with other Ingerish-speaking states, in 1918 the leaders of a number of states assembled at Girton House to discuss international cooperation and trade. The outcome of the meeting was the Winburgh Declaration, which constituted a "free association of independent states which to be known as the Ingerish Commonwealth". All current and former imperial dominions, plus any state with a "sustained history of Ingerish social, cultural, or economic involvement" was deemed eligible to join. No distinction was made between dominions, republics, and those states with their own monarch. All would be treated as full and equal members of the new body.

In 1984, the remaining Ingerish colonies were transformed into Overseas Territories and admitted as full members of the Commonwealth.

Girton House has been the home of the Ingerish Commonwealth since it was bequeathed by the Ingerish Royal Family in 1964.

Head of the Commonwealth

Secretary-General of the Commonwealth

There are a number of bodies and associations connected to, or under the control of, the Secretary-General of the Ingerish Commonwealth. Membership and participation in these organisations in entirely voluntary.

Commonwealth Bureau of Weight and Measures

The bureau defines each unit of measurement, and its relationship to other international standards, such as the international standard used elsewhere in the world. Initially defined using physical prototypes created by the Ingerish government in the 19th century, since the 1960s the basis of most units has been determined by the value of certain universal physical constants. The use of these constants ensures any unit of measurement can be recreated anywhere in the world at any time and is not reliant upon prototypes that are prone to error and accidental destruction.

The Commonwealth Institute for Cultural Heritage is the body responsible for the designation and protection of sites and areas of historic, scientific, or cultural importance to the Commonwealth.

The Commonwealth Institutes for Scientific Cooperation (CISCs) is a group of scientific institutes aimed at applied technological, industrial, economic, and policy research; with as its primary focus those areas of research that are most likely to contribute to the economy, society, and industry of the various member states of the Commonwealth.

The CISCs were established formally by the Agreement on Commonwealth Scientific Affairs in 1921.

Commonwealth Institute for Economics and Trade

The Commonwealth Memorials Trust (CMT) is the institution responsible for recording, construction, and maintenance of the graves and commemorative sites of soldiers killed in the service of the Ingerish Empire and Commonwealth since 1900.

The Ingerish Commonwealth Aid Organisation (ICAO) is the institution responsible for co-ordinating aid and disaster relief between Commonwealth members. The ICAO was established in the aftermath of the Great War as a means of helping to rebuild nations affected by the conflict; it has since grown into one of the world's largest aid organisations, and has most notably been involved in relief efforts in Glaster and Commonia. The ICAO also operates chains of second-hand shops in various member nations around the world.

CS/1791 is one the many technical standards overseen by the Commonwealth Standards Commission.

The Commonwealth Standards Commission (CSO) is the body responsible for the formulation and implementation of industry standards across the Commonwealth. The CSO develops the internationally aligned Commonwealth standards (CS). Notable standards include CS/1791 that regulates AC plug and socket outlets, and CS/3229 specifying the construction details, dimensions, quality, and performance of cricket balls.

Membership of the body is open to all members of the Commonwealth, but is not compulsory, with some nations opting to create and administer their own technical standards. Founded in 1920, the CSO is based in the industrial city of Worthing, Ingerland. The body was also a founding member of the Assembly of Nations Social and Economic Council.

The Commonwealth Space Agency is the body responsible for the promotion and development of aeronautics and space exploration. The agency was established in 1960 as the successor to the Ingerish space programme, which itself was started in the immediate aftermath of the Great War. The ICSA is an organ of the wider Ingerish Commonwealth organisation, although membership in the latter does not automatically confer membership in the space programme. The primary ICSA launch vehicle is the Arrow VI, developed in partnership with Vulcan-Aérospatiale.

The agency operates a number of facilities across the world. At present, these are distributed among the following centres: 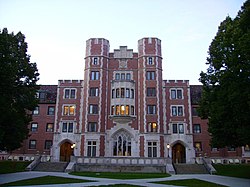 The CEDAR Programme allows for overseas Commonwealth students to study at institutions such as University College Kingsbury (pictured, above)

The Commonwealth EDucation Action Roundtable Programme is a student exchange programme for tertiary-level students that was established in 1950. The plan aims to allow Commonwealth students to travel abroad to improve their education, and gain experience living and studying in another country.

The Radford Scholarship is a postgraduate award for students of Commonwealth countries to enable them to study various public policy degrees at the University of Winburgh. The scholarship was established in 1910 from the estate of the late Claude Radford, a Karvaland mining magnate. Radford left a large sum in his will for the establishment of a trust to administer the scholarships programme. The aim of the scholarships was to "Further the cause of education for the purpose of expanding and preserving the Ingerish empire".

In 1948, the programme came under the umbrella of the Commonwealth, where it remains today. The trust presently awards 57 scholarships every year (one for each year of Radford's life), which are allocated according to a formula drawn up in his last will and testament. The amount awarded has varied over the years, but today stands at £1,100 per student per year.

A number of Commonwealth nations are members of the Commonwealth Free Trade Area (CFTA), a multilateral free trade agreement promulgated in 1985. The CFTA is the successor to the Commonwealth Trading Environment (CTE), which was established in 1954 between Ingerland, New Ingerland, and Vodeo as a means of counterbalancing the trade dominance held by the Federal States. CFTA members commit themselves to the removal of trade barriers with other signatory nations and are encouraged (but not required) to lower tariffs and make trade easier with non-signatory Commonwealth nations.

Many Ingerish Commonwealth nations possess a shared tradition of customs and culture that remain unique to the Ingerish-speaking world. Such connexions manifest themselves in from the simple playing of common sports such as cricket, netball, and rugby; to more complex matters such as the Winburgh system of parliamentary democracy, and the use of common law, as opposed to the codified legal systems used elsewhere.

Since 1910, the various members of the Commonwealth have participated in a global multi-sport event known as the Ingerish Games, which are second only to the Pax Nova Games in scale and participation. The games feature a mix of traditional international sports, such as athletics and swimming; as well as games whose origin can be traced back to Ingerland and are typically only played in the Commonwealth, such as cricket and lawn bowls.

A number of Commonwealth nations participate in a joint military taskforce known INGCOMFOR - Ingerish Commonwealth Force. INGCOMFOR is charged with the defence of smaller Commonwealth countries who lack the means to raise a military and defend themselves. The task force is also charged with anti-piracy operations on the open seas, suppressing human trafficking, and halting the trade in illegal goods such as ivory.

As an aside, for historical reasons, it is typical for Commonwealth military forces to a high degree of interoperability and standardisation. Most have a common military doctrine, use the same equipment and weapons, and use a common set of rank insignia.

Many Commonwealth military forces employ a common set of ranks and rank insignia to their personnel. These ranks found their origins in the early modern Ingerish military that led to the expansion of the Ingerish Empire. As local colonies and dominions began to take on more responsibility for their own defence, it stood to reason that they would adopt the same military structure as Ingerland.

The INGCOMFOR force was formed in response to the final wave of decolonisation of the Ingerish Empire in the 1970s, and the subsequent wind-down in Ingerish military operations abroad. Acknowledging that many newly independent states did not have the capacity to defend themselves from foreign powers or communist insurgents, the force was formed on 1 July 1970.

This situation persists to the modern-day, with the establishment of a standard rank structure, as defined in the CX01051769 - Commonwealth Code for Grades of Military Personnel.

The Commonwealth Procurement Executive (CPE) is an inter-governmental body responsible for the acquisition of materiel, equipment, and services for forces of the Commonwealth that utilise the Standardised Defence Arrangements - a body with the goal of interoperability between member nations.