Kuehong was inhabited from as early as 20 000 BC. The Kue established their first kingdom in 500 BC and became a vassal state of the Bai until the Hoai Dynasty. In the 15th to 16th century, the region was annexed to be part of the Bai Empire (under the Suo Dynasty). The Kue later became part of the Yuet Kingdom which rebelled against the Suo but failed to gain control of Bai Proper, leading into the Peninsula War. After which, the Yuet became subjected to foreign powers. In 1928, the Kue rebelled against the Cinasian Republic that succeeded the Yuet. Shortly after its official independence, Kuehong became a communist state, after which the new military junta unified with Northern Cinasia to form the Federal Republic. In 1967, after a decade of political instability, the military seized power and transformed Kuehong into a stratocracy. Kuehong developed rapidly under military rule, and the military initiated a series of economic and political reforms in the 80s that facilitated Kuehong's integration into world politics and the global economy.

Kuehong has a total land area of 135466.08 km². Much of the country is on the portion of the Muinon Peninsula between Fayaan and Cinasia. Kuehong includes several outlying islets, including Vang Ngat Island, Chau Bo Island and Lon No Island.

Two mountain ranges stretch across in a general northeast to southwest direction. Most of the country's population resides on the flat to gently rolling plains of the coastal areas.

Kuehong is a federal parliamentary republic ruled by a military junta. With military rule legitimised since the 1972 Constitution, political power rests in the hands of the military officials, who assimilated the entire population of Kuehong under the military. It is an executive-led governing system, with the National Security and Stability Council (NSSC) as the executive branch. The head of state is the Chairman of the National Council, who serves for at most two five-year terms, while the head of government is the Chief of the National Advisory Assembly (Chief of the Assembly), the leader of the federal legislative branch. The Assembly holds its sessions in the National Assembly Complex in Bakdep.

With the reforms of the 90s and the 20th century, limited powers were discharged to the National Assembly, which allows it to amend the Constitution, enact and amend basic legislation and determine "major state issues worthy of legislative action". The National Assembly is a fully-elected body, with its 600 members elected through national elections held every 5 years. It is led by the Chief of the Assembly, who is elected by the legislative body. The nine states also have their state legislative chambers with state elections running concurrently with the national elections. True political power, however, rests in the NSSC and its respective State Commanders. The NSSC has the authority to dissolve the national and state assemblies and postpone elections indefinitely.

The National Supreme Court of Kuehong, headed by a chief justice, is the country's highest court of appeal. The legal system of Kuehong is the legal system of the military. Beneath the Supreme People's Court stand the provincial municipal courts and numerous local courts. Kuehong is known to have very tough penalties for certain offences as rape, rioting, vandalism, and certain immigration offences. Homosexuality is banned in Kuehong, though LGBT rallies and organisations are permitted to exist.

Kuehong's foreign policy is to "consistently implement a policy of independence, self-reliance, peace, co-operation, and positive development" for the country and other nations. Kuehong remains isolated from the Ulethan nations and the Federal States over its human rights abuses and missile programme, with sanctions and arms embargo imposed on the military government. Kuehong has tense relations with its neighbours Fayaan and Cinasia, particularly over border disputes and the Shaachrau Crisis.

Embassies of foreign nations are located in the national capital of Bakdep. Consulates and economic liaison offices are located in other major cities of the country, such as Vang Ngat and its former capital Namthinhvuong. Kuehong also has its representative offices abroad, which has been suspected of hosting and coordinating espionage activities. 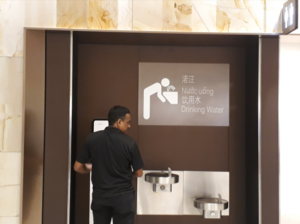