Difference between revisions of "Leresso"

The Leressan Republic (ᠬᡃᠠᠨᡪᡝᠭᠠᠴᡃᠠ ᢇ᠋ ᡕᡠᠶᡝᠴᠠᠨ᠌ kạnṛegahạ 'a yurehan), also known as Leresso (ᡕᡠᡰᡝᠴᠠ yureha), is a country located in Western Antarephia along the upper portions of the continent's Hesperic coast. It is bordered by AN138 to the north and AN141c to the east. The capital and largest city is Aludres, which is one of two main economic and population centers in the country, the other being the port city of Maqạnta. The country covers an area of approximately 37,000 square kilometers and hosts a population of around 12.3 million. The official language is Yerevi, though Ingerish is also widely used.

Much of Leresso's modern history is defined by its status as an Ingerish colony in the late 18th and early 19th centuries.

Leresso, officially the Leressan Republic, is a country located on the southern coast of western Antarephia. Leresso is bordered to the north by AN138, to the east by AN141c, and by the Hesperic Ocean to the south and west. Its capital is Aludres, which is also the largest city. It is a small country of 37,000 km² (≈14,280 sq mi) and has a population of almost 13 million.

It is unknown where the name "Leresso" comes from, though it is widely believed that the name is a rough transliteration of the native Everian name Yereha, meaning "big land".

Leresso is a geographically diverse country dominated by an array of mountains and rivers. The two largest rivers are the Kadmar and Sani rivers. Meltwaters from the nation's highest point – Ḥayqetò (ᠬ᠋ᠠᡕᡎ᠋ᡝᡨ᠌ᠣ) (3188m) – are generally accepted as the earliest source of the Kadmar river, which flows southwest through an expansive valley of the same name and meets the Hesperic Ocean at Maqanta. A collection of mountain springs that span the Leresso-AN141c border are thought to originate the Sani river, which flows through the eastern third of the country and empties out into the Hesperic Ocean just northeast of Aludres.

Much of the country's flat land, both on the coast and in the interior, is comprised of grassland or shrubland, known locally as sogarey. 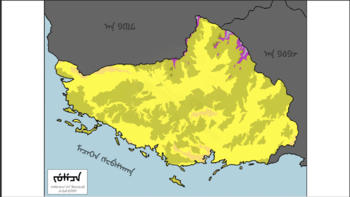 A map of Leresso's climate zones.

Due to its small size, Leresso does not experience a vast array of climates as one might expect from the topography. Generally, the Leressan climate is classified as Csa, with regional variants. The coast typically has the most stable climate, whereas further inland the temperatures begin to vary more, with hotter summers and colder winters, as moisture from the ocean is too far away to regulate the inland climate. The Leressan Climate is temperate and dry, with warm, sunny summers and cool, mild winters. The average temperature throughout the year remains comfortable thanks to the offshore wind current that flows into the major valleys.

The climate zones contained within Leresso are as follows:

Leresso is divided into 32 urasà (counties/cantons). The capital, Aludres, is located within its own uras. Each uras is then grouped into one of five regions: Western, Central, Southern, Eastern, and Northern. These regions hold no administrative power and primarily exist for data collection, supposed regional identities, and other minor matters. Each uras​'s government is centered in its largest city.

Leresso is widely regarded as a region of exceptionally high rates of endemism and biodiversity. The country is home to over 7,500 different plant species, of which 73 percent are endemic. Many of these endemic plants are concentrated in a type of dry temperate biome unique to the area known as sogarey (Yerevi: ᡄᠣᠭᠠᡰᡝᡕ).

As a small regional power in Antarephia, Leresso maintains strategic economic, political, and military alliances with its neighbors, as well as the other continental powers of Antarephia, such as Guai and Ullanyé. Leresso also has a notable presence in northern Tarephia, given its embassy in Al-Kaza. Perhaps the country's most vital trade partner is the Federal States, being Leresso's biggest importer and contributing a sizeable amount to the Leressan economy.

Leresso also maintains relations with the Antarephian Coalition; however, it is not a member state and the Antari is not an accepted currency in Leresso. In recent years, Leresso has signed a "porous border" agreement with the AC, authorizing a streamlined immigration process for AC passport holders.

Leresso's position at the far western edge of Antarephia and the geographic isolation caused by the country's mountainous north and east explain Leresso's relative dependence on the Hesperic Ocean. When it comes to the country's military, the naval force receives the largest budget of the three branches since the ocean is where the country's influence can be most effectively projected. In the recent past,

The Leressan economy is mainly based on the service, manufacturing, and agriculture sectors, as well as the mining and tourism industries. It ranks as the world's thirty-second largest economy and in 2018 generated a nominal GDP of approximately $114 billion USD.

Leresso uses the rivan (LER) as official currency. Its current exchange rate sits at 1.000 LER per 0.0837 USD. It has no subdivisions. Physical currency can be found in the form of coins and bills, with each piece's denomination marked in both Mazanic and traditional Yerevi numerals. Coins are made in ৲᠑ (1 LER), ৲᠒ (2 LER), ৲᠕ (5 LER), ৲᠑᠐ (10 LER), ৲᠒᠐ (20 LER), and ৲᠕᠐ (50 LER) denominations. Bills are made in ৲᠑᠐᠐, ৲᠒᠐᠐, ৲᠕᠐᠐, ৲᠑᠐᠐᠐, and ৲᠒᠐᠐᠐ denominations.

Leresso uses the drivan (Ɗ, ৲) as official currency. First introduced to Leresso and West Kadmar in the summer of 1889, the drivan proved to be a more efficient currency to exchange than its predecessor, the Ingerish pound. The drivan is produced by the Leressan National Mint located in Aludres and circulates around the country. It is not used by any other country. The Leressan currency comprises coins of 1 drivan and 10 and 50 cent denominations and notes of 1, 5, 10, 20, 50 and 100 drivan denominations.

As of 2021, approximately 41% of Leresso's population lives in cities. The most populous cities are:

Everian uses the Kadmaric Alphabet, a writing system with no known connections to any other writing system in the world. Like most southern Antarephian nations, Leressans take pride in their unique language and consider it to be integral to the national identity. It is also one of the few non-Romantian writing systems in the world with a unique punctuation system. It has 32 letters.

There also exists a Romanized alphabet used mainly in educational contexts. There are a total of 32 letters. Three diacritics (grave è, line ē, and acute é) are also used as tone markers at the end of a word.

An example sentence in traditional written Yerevi, its transliteration using the Faye Romanization System, and its translation in Ingerish:

The Yerevi flag is considered a highly important symbol of Leresso. The flag, which is in a 4:7 ratio, consists of two vertical yellow bands surrounding a vertical blue band with a kubaṛe symbol in the middle of the flag. The blue symbolizes the Kadmar and Sani rivers, as well as peace, determination, and loyalty. The yellow bands represent prosperity, fortune, and eternal wealth. The kubaṛe is a traditional adornment that has been at the center of Yerevi culture for centuries. It is worn exclusively by men on their forehead and is considered a symbol of vigor, prowess, fertility, and power. It is a traditional gift for young Yerevi men on their 17th birthday, indicative of their ascension to manhood. It used to also be an indication of status (particularly high nobility or even royalty), but since the late 19th century the adornment has taken on a wider cultural significance and became socially acceptable for all men to wear.

Music is a huge part of Yerevi culture.