Difference between revisions of "Pyingshum" 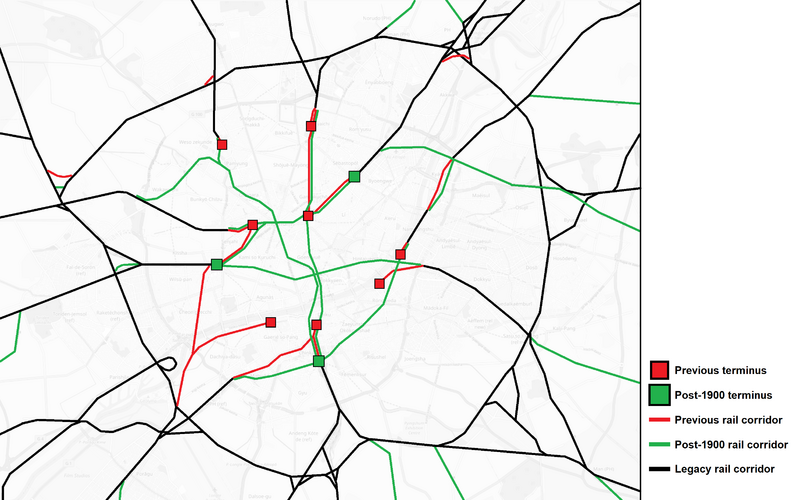 Pyingshum International Airport, around 50 km to the east of the city center near the city Formajiá, is the regions principal airport and also functions as hub for all of Kojo. It served 67.3 million passengers in 2021. It is the busiest airport in Kojo by far both in terms of passenger and freight volume. It is a relatively new airport with a main terminal in the shape of a six-armed starfish. There, it features a large tropical garden open to all levels with a cylindrical waterfall entering through an opening in the roof construction.

It became apparent in the early 1990's that further expansions at Longte Puechaésa were unfeasible due to lack of space. Similar to the closed Kū A'éropō, the adverse impacts of noise pollution also became a heated subject of discussion. As a result it was decided to construct a large new national airport far outside the city boundaries. Quick access to the city and the rest of the country was ensured by the newly to be constructed Papáchē line and a high-speed railway. A first provisional terminal, which nowadays is used by low-cost carrier airlines, as well as the first two of a total of four runways opened in 1998, which enabled the full closure of Kū A'éropō and the conversion of its airfield into green space and part of the railway corridor connecting the new airport to Kibō-Dyanchezi. The main terminal building opened in phases between 2003 and 2005. The newly added capacity allowed Longte Puechaésa to close for scheduled air traffic in 2004. Consequently, Longte Puechaésa's southern runway was converted into a park area and all side terminals and parking areas were turned into new neighbourhoods and commercial areas. Longte Puechaésa remains in use for special freight deliveries, government as well as private flights. Since 2019, a new midfield terminal is under construction at Pyingshum International. Since 2021, Arm C is the first arm to be closed for a thorough renovation.

The river Kime is an important route for freight shipping. Passenger ferries play only a very minor role due to the high number of bridges, however there is a large number of sightseeing tours, especially along the scenic river banks in the inner city and the Sunmyuel Tyanhā, as well as a small number of river cruises.

Pyingshum's ports, from north to south, are:

While Pyingshum accounts for only about a fifth of Kojo's population, its share of the national GDP is almost one third.

While the manufacturing industry accounts for a smaller share in Pyingshum's economic output than other cities in Kojo, it remains a consequential sector overall. Including construction, it accounts for 13 % of the city's GDP and employs a similar share of the workforce. Construction, food and material processing and machinery production as well as niche products contribute over-proportionally to the secondary sector compared to the Kojolese average.

The dominance of the tertiary sector in Pyingshum is even more pronounced than in the rest of the county and other developed nations. It makes up 86 % of the city's economy and employment, with a higher spread of income among workers in this field compared to the primary and secondary sectors.

As a global city, the finance and consulting industry has a strong foothold in Pyingshum. Most larger Kojolese companies have their headquarter in Pyingshum, and the city is the prime location for Kojolese branch offices of international companies. Much of the associated office space is located in the high-rise district Chinkágaldosim-Pang. The Pyingshum Stock Exchange is also situated there. Due to its primacy, Pyingshum is also the nation's largest host of conferences, fairs and leisure events. This is exemplified by various large-scale venues.

Being the most visited city in Kojo, tourism is not only relevant for its directly associated industries such as hospitality, but also for the city's well developed retail, gastronomy, culture and personal service industries. The most pricey retail areas are situated in Daiamondoshi-Pang, where not only the wealthy residents of the neighbourhood themselves but also affluent visitors from all over the world frequent the many exclusive boutiques, delis and jewellers. It is estimated that about 10 million international visitors come to the city every year (spending an average 3.8 nights and 2990 Zubi (130 USD) per night), with an additional 6 million overnight guests from inside Kojo (average: 2.0 nights). The number of domestic day visitors (excluding regular commuters) is thought to be around 40 million, however these numbers are difficult to estimate.

Education and research is also a major economic factor for the city. University students from all over the country and abroad come to study at one the city's many institutions of higher education, both because of their quality of teaching and the high quality of life in the city itself. Consequently, Pyingshum is a highly attractive location for all kinds of research institutions.

Being the nation's capital, the public sector is often assumed to make up a big share of the city's economy. While the national government and parliament contribute heavily to Pyingshum's relevance in Kojo and abroad, for example by attracting a large number of international governmental and non-governmental organisations, public service employment is actually not much higher than in most other cities in the country. This is because for the most part the lower agencies of the national administration, which make up the vast majority of actual employment, are spread throughout the country. The city once calculated that the lower number of children in Pyingshum compared to the national average and consequentially lower number of school teachers being employed in Pyingshum by the national government in itself alone offsets all employees working in the Chancellery, the ministries and parliament. In absolute terms however, the municipal government alone is by far the largest employer in the city, like in most places in Kojo.

The transportation industry also plays a larger than average role in the city's economy. This is mostly due to the high number of logistic businesses as well as the high share of public transportation. As a result, the Pyingshum Kōkyō Susyong Unzuó (Pyingshum Public Transport Authority) is the second largest employer in the city.