From OpenGeofiction Encyclopedia
(Redirected from AN140b)
Jump to: navigation, search

Jardinia (/dʒɑːrdɪniə/; Castellanese: /xɑrdɪniɑ/), officially the Republic of Jardinia (Castellanese: República de Jardinia), is an island country located in the eastern Hesperic Ocean, around 30 kilometres off the coast of Oxhano, in northwestern Antarephia. It comprises 8 main islands and other minor islets, divided into 6 regions called comarcas.

Its capital city is Mondeonís and its largest city is Gibalbar, both located in Matano Island.

The name Jardinia was given to the archipelago by the Castellanese colonizers in the early 16th Century. It derives from the word jardín, which means "garden" in Castellanese, because of the dense forests and biodiversity that covered the islands.

The earliest archaeological remains found in what is now Jardinia is Las Rodantas Archaeological Site, in Gramín Island, which has been dated back to 10,000 BC aproximately. Most historians agree that either heat waves or wars between tribes in the Antarephian continent led to gradual migrations to the islands. Many prehistoric tribes established in the archipelago between 8000 BC and 2000 BC.

Around 1000 BC, Taukan tribes from now-day Guai arrived at Matano Island and quickly took control of most of the Jardinian islands. They introduced writing and a new political organization. This is considered the first civilization to establish in the Jardinian Archipelago, whose economy was based on agriculture, mining and sea trading.

During the 1st century BC, several internal wars led to the rise of the Borong Civilization, which only had control over the Jardinian islands. The Borong Era was a time of isolation and setback, with many reported genocides and famines.

In 1508, the Castellanese land in Western Matano and quickly take control over the whole island and the majority of Zódar Island. The colonizers founded San Juan Bautista (Albún) and San Cristóbal del Monte de Onís (Mondeonís), and named the archipelago as Jardín de la Mar Nueva. During the 16th, 17th and 18th centuries, the Castellanese used Jardinia as a point of connection between Tarephia and the colonies in Guai, Brulias or Paxtar.

In 1812, the colony of Jardinia was handed over to the Florescentan Empire, who renamed the territory as Ilhas Jardim. Florescenta owned the territory until 1874, when the collapse of the Empire and the local revolts for the independence of Jardinia forced the colonizers to flee. However, those claims for independence were rapidly muted by the Ingerish Occupation of 1874.

The archipelago became part of the Ingerish Empire with the name of New Gardenland, but was largely unattended by its rulers due to its isolation from the rest of the Empire and the apparent lack of resources.

Independence from Castellán was obtained in 1959 through a peaceful transition. Democratic elections were held that year and a new constitution was enacted. During the 1960s and 70s, Jardinia became a modern and richer nation, mostly because of the rediscovery of Naú mercury mines (research later found that Taukan tribes had also exploited the mines in the first millennium BC).

In the 1980s, however, tensions started growing as several economic crisis at the beginning of the decade had left 40% of the population unemployed. Political instability also became an issue in 1984, when the right-wing party Patriotic Alliance, which had been in power since independence, refused to accept the victory of the Communist Party of Jardinia, which had won 37 of the 50 seats in the Cortes.

Sign warning of a minefield in various languages, near Alcazarrín. Minefields from the Civil War are still an issue in Jardinia.

In the first years after the Civil War, the government led by Ximénez enacted a quasi-socialist constitution and took many draconian measures, specially towards the political persecution of dissidents. Thousands of pro-Patriots had to go into exile and those who stayed were put through tortures and imprisionment. The government also expropriated most private companies and private media was shut down. This line of action drew Jardinia into the international spotlight. Soon, the pressure from international governments and agencies, including some of Jardinia's allies, led to a change in the political regime, with a new constitution and the adoption of Jardinian socialism.

The Constitution of 1995 establishes a bicameral parliament with a Chamber of Legislatiors for political parties and a Social Assembly for trade unions. Only parties which have adopted Jardinian socialism as part of their ideology are legalized and allowed to concur to elections, which means that in fact only the Workers' Party and allied parties such as the Socialist Party of Jardinia have representation.

In the late 90s and early 2000s, the succesives goverments took liberalizing measures and tried to recover from the wounds of the Civil War. More embassies were built and private companies were given more freedoms.

In 2008, a new turning point took place after the election of Manuel Rojas as President of Jardinia. His government started taking radical measures as the ones from the post-war period, including expropriations, nationalizations, more strict censorships and persecution of dissidents. That combined with the closure of the mercury mines of Naú in 2010, which skyrocketed unemployment and poverty rates, led to an unbearable situation for the Jardinian population.

Policemen chasing protesters in Mondeonís during the protests against Villalobos’ government in 2019. International organizations have raised the alarm about violations of human rights and disproportionated police violence.

During the 2010s, civil demostrations and insurgencies have been common. Jardinia currently is one of the poorest countries in Antarephia and has one of the highest inflation rates in the world. Since the resignation of Rojas in 2019, weak and short-lasting governments have tried to calm down the situation of the country.

The islands that form Jardinia sum up an area of about 750 km2. The biggest island is Matano Island, followed by Zódar Island, Gramín Island, Flat Island and Head Island. The archipelago is located in the Hesperic Ocean, 30 kilometres away from the Antarephian continent. The islands are mostly mountainous, with dense forests and fertile valleys and plains, being the largest one the Plains of Zódar.

Grandón is the highest peak of Jardinia at 2079 metres above sea level. During centuries, however, it was believed that the highest mountain was Angradudú, in Matano, which lies at 1804 metres MSL.

Jardinia has a mediterranean climate, with hot or warm summers (Csa to Csb in the Köppen climate classification). Mountains and the westernmost areas tend to be colder than the rest of the country.

Jardinia's constitution defines the country as a "people's democracy", which is "guided by the ideas of Jardinian Socialism". Technically, the country follows a parliamentary system, in which the President is elected by a Parliament elected in a general election every four years.

The national legislature is the Cortes de las Islas (Islands' Courts), which is formed by two houses: the Chamber of Legislators for political parties and the Social Assembly for trade unions. The Cortes also elect the President.

Each of the two chambers of the Parliament has 50 members elected by six constituencies (matching the comarcas) by proportional representation.

The main party is the Workers' Party (called Comunist Party of Jardinia until 1987). It was the only party allowed to participate in elections until the constitutional reform of 1995. Through that constitutional reform, the country abandoned the stricter communism that had been Jardinia's ideology since the end of the Civil War, and adopted the Jardinian Socialism.

The legal parties, which can stand for elections, are:

The Republic of Jardinia is divided into 6 regions called comarcas. Each comarca has a capital, a trial court and a local council composed by the mayors of its municipalities.

For centuries, Jardinia's economy has relied exclusivelly on agriculture, fishing and mining. Nowadays these sectors coexist with other manufacturing industries thanks to the processes of industrialization in the 1960s and in the 1990s. The industrialization of the 1990s made Jardinia one of the fastest-growing economies in the world until the late 2000s and early 2010s, when the crisis hit the country and many factories were closed, sending many people back to agriculture and fishing.

Tourism is also a growing industry in Jardinia. Although governments have tried to promote the country as an international tourist destination, tourism is still undeveloped because of the small size of the country, the lack of infrastructure and the strict visa requirements.

In the 1990s, the government tried to promote the automobile industry in Jardinia through the National Motorization Plan, which was based on encouraging people to buy FANA cars as a way to promote the industry and the modernization of the country. As part of the plan, the road network in Jardinia was largely improved.

View of the trunk road between Gibalbar and Llandosa, of which only 3 km have been built.

There are a few trunk roads (autorrutas), which are mostly accesses and ringroads in the main metropolitan areas. They have at least two lanes on each way, no level crossings and a maximum speed of 100 km/h.

Conventional roads, which link urban areas, have traffic signs, surface markings and a maximum speed of 80 km/h. Their ID is a letter C followed by the number of the comarca and the specific number of the road.

Rural parts of the country are still conected by precarious roads in which landslides, impassable potholes and accidents are not uncommon.

Buses play a major role in the public transport of Jardinia, as it is the only one available in most of the country. A dozen companies operate urban and interurban routes, some of which are state-owned while others are cooperatives. 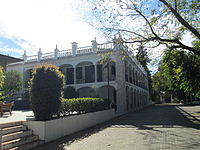 La Histrionisa Palace and its plot, located in the hills near Mondeonís colonial city, are the headquarters of the National Independent Education Centre.

The Jardinian education system is entirely public, with only one private institution allowed: the National Independent Education Centre. In recent years, the economic crisis has led to the deterioration of the public educaction system, which in the 90s and 00s was world-wide known for its quality. Education is free from elementary school to higher education (university). The basic education (Educación Básica) is eight grades long, from 6 to 14 years-old. The middle education (Bachillerato) is four grades long, from 14 to 18. The university education can be three, five or six years, depending on the degree. There is also vocational education (Formación Profesional) which can be two or three years. The only university in Jardinia is the National University of Jardinia. The National Independent Education Centre, despite not being considered a university, offers some valid degrees.

The Jardinian government directly or indirectly controls most media in the country. The state-owned Empresa Nacional de Difusión (National Broadcasting Company) has the monopoly over television and owns six of the eleven legal radio stations and the most read national newspaper.

The most popular sports in Jardinia are football, basketball, martial arts, cycling and bullfighting.