Abidom (Castellanese pronunciation: [aβiðom]) is a town of Jardinia, located in the north-west of Matano Island. It is the capital of Western Matano.

It has an estimated population of 34,000. Founded in 1672 with the name of Santo Tomé del Monte Alto, Abidom has recently become an important economic hub in the country and a touristic destination. Economic sectors like fishing, agriculture, paper and tire manufacturing and banking employ most of its population. Ciudad Obido, a borough built in the 1970s, is one of the richest neighbourhoods in the country and is home to many members of the elite.

Abidom sits in the northernmost part of Matano Island, in Cape Abidom. The city center lies in the banks of the Rambla de Abidom and streches between the sea and the mountains. Some suburbs are located in the banks of River Obido and in the sides of mountains El Antiguo, Cerro de la Vista or La Barosa.

The city is surrounded by forests and tobacco plantations. 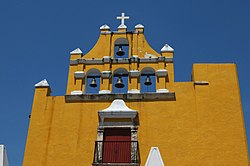 It is the oldest church of Abidom. It was built in 1680, shortly after the foundation of the settlement. During the Civil War it was destroyed and then restored.

In the western side of El Antiguo, this fort was once used to store gunpowder.

The New Port of Abidom was built in 2000 to solve the problems derived from the small capacity of the old fishing port. It is located between Abidom center and Sendasí and has a market, a naval base and a ferry terminal.

The city is conected by daily ferries to Cardamom Island, Treana and Naú.

Abidom is mainly served by the C30 road, which connects it to Mondeonís and Albún, and by the Reservoir Road, which leads to Abidom Reservoir and Angradudú National Park.

To put a solution to the heavy traffic of the city, the national government started building in 2006 a new ring road. As of 2020, only half of the projected road is built and open.

Autobuses de Abidom is the public company in charge of buses in the city of Abidom. There are three lines as of 2021.