Adelaide I (full name: Adelaide Victoria Lucille Rose Norton, 21 April 1830 – 3 September 1917) was the sixth Queen of Vodeo from 26 October 1849 to her death. Her reign of 67 years and ten months is known as the Adelaidean era. It was a period of major industrial, cultural, political and scientific change within Vodeo and its predecessors. Hers is the longest reign of a Vodean monarch thus far; her great-great-great granddaughter, Adelaide II, who was named after her, is Vodeo's second-longest-reigning monarch at 30 years.

Adelaide was born on 21 April 1830 at Fort Brynderwyn in Brynderwyn, then still used as a military fortification, as the second child of the Crown Prince and Crown Princess (later King Richard and Queen Julia); coincidentally, this was on the same day as the 70th anniversary of the Consolidation of Vodeo. Her father Richard was the brother of the then-reigning King Thomas I. Adelaide was baptised at Saint Clair's Cathedral in Holme on 25 May, and named for a 10th century Christic saint.

At birth, Adelaide was third in the line of succession to the Vodean throne, behind her father, and her sister, Julia. Owing to the young age of her uncle, none of the three were expected to succeed to the throne, and as a result Adelaide's upbringing was relatively normal. Adelaide dropped to fourth in line twice, following the births of her brothers Thomas (born in 1831) and Ernest (born in 1834), however neither child survived infancy. Adelaide's youngest sister Alexandra was born on 1 February 1837, only two weeks before Thomas' death on 14 February.

Thomas' death without an heir apparent meant that the crown passed to his brother, making the nine-year-old Julia heir to the throne. The change in succession caused a major change in relations between the family members - Julia's status as heir presumptive meant she was groomed for the role by both her father and the Cambrian Council of State. Adelaide, by contrast, was not expected to take the throne, and as a result was almost completely ignored by her father, with whom her relationship became strained. She maintained a good relationship with both her mother and sisters, and involved herself in education. She was privately tutored, and became fluent in Franquese, Castellanese, and Romantian by the time she was a teenager. Adelaide developed a mischievous streak during this time, and would often sneak out of the palace grounds to meet with friends; her parents suspected that she was meeting with young men and made efforts to restrict her to the palace grounds, however she was aided in her endeavours by her sisters and sympathetic palace staff, who would distract her parents and turn a blind eye to her comings and goings.

Following tradition, Julia was admitted to the Vodean Council of State on her 17th birthday in September 1844 and was named Princess of Avalon, the title traditionally bestowed upon the heir apparent. However, she fell ill one month later and died on 3 November. Adelaide later wrote that she was "consumed with the most overwhelming grief", and did not realise at the time that her sister's death made her the heir to the throne, only learning of her new status as Crown Princess after her parents told her the following day.

Following her sister's death and her rise to first in line to the throne, Adelaide's relationship with her father began to slowly improve as he educated her on royal protocol and began preparing her for her role as heir to the throne. At this time, Richard was in his mid-40s and in good health, and as such Adelaide was not expected to take the throne for some years, if not decades. Adelaide continued her education, and was made Princess of Avalon and admitted to the Council of State on her 17th birthday in 1847. Deemed of age to begin considering taking a husband, arrangements were made to introduce Adelaide to members of various royal families, including those of Ingerland, Florescenta, and Broceliande. Adelaide, however, took little interest in any of the potential suitors, believing herself too young to marry and preferring to meet a partner on her own terms. 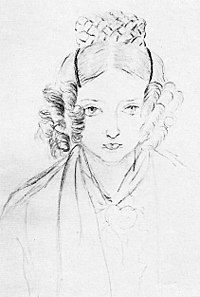 Though Richard had enjoyed good health throughout his life, his health had begun failing in late 1848, and in mid-1849 royal doctors forbade him from travelling outside of Holme. Adelaide began standing in for him at state events and on the Council of State, which helped to bolster her profile. By early October 1849 it was clear that the king was dying, and Adelaide was instructed not to leave the city. Richard died early in the morning on 26 October; Adelaide, who was asleep at the time, was awoken shortly before 6 a.m. and informed of her father's death by the Archbishop of Holme. Both her mother and her sister Alexandra were also present, and the latter was the first to address her as "Your Majesty". Adelaide later wrote in her diary that "the days seemed to pass without distinction from one another, as if they had somehow joined to move as one."

Adelaide's life has been the subject of a number of radio plays, television shows, and films. Most notable are the 1980 drama miniseries Adelaide, and the 1999 film The Last and First Queen, which were produced to mark the 150th anniversaries of her birth and accession to the throne, respectively.

A commemorative shilling coin was struck in 2017 to mark the centenary of her death. Her head, based on a photograph taken in 1860, was featured on the obverse of the coin, one of the few times the reigning monarch's profile has not been featured on a Vodean coin.