Merracos to the west. Al-Kaza's economy is heavily dependent on its largest cities, Teşhir and Yamirajyat, with the rest of the country reliant on agriculture, resource extraction, and tourism. The nation's capital is located in the center of its coastline in the city of Canan.

The Kazari capital building in Canan is an iconic example of Mejut-mod architecture, a regional style of Art Nouveau that developed in Al-Kaza in the late 19th century.

The first area of modern-day Al-Kaza for which there are records of permanent human settlement is the coast along the Gulf of Abren, which was home to the ancient Letoians. It is believed that Letoian civilization developed as tribal groups that had made their way down from the Serion Desert began trading with the ascendant Hellanesians around 1400 BCE. Early Letoian city-states formed a loose confederation that was part of the larger Hellanesian sphere of influence, and by the 10th century BCE the supplicant state of Letoia was fully integrated into the regional trade network surrounding the Strait of Abren.

Today's Kazari state can trace its roots back to 820 CE, when an Imam named Kerim Sadeq began to question the teachings of Imanish leaders in the region. Sadeq and his congregation (called al-kaza, the followers of the lost) were banished to a fortress-like mountain valley now known as the Kaile Vaydi. Isolated from the rest of the world, they developed the practice of Arayam, an agnostic offshoot of Iman; practitioners are known as arayanla, and Arayam is dominant in the country today even after more than a century of changing demographics.

The Kazari began trading with the Leotians along the Neyir Sema (IN: Sema River) around the turn of the 11th century CE. By then Letoia had become a Christic society, and was quickly losing ground to Imanish Crusaders closing in from the east and west. In less than a century, Letoia had been wiped off the map, and the Kazari migrated down from the mountains, founding the city of Cenet in 1121 alongside the ruins of the Letoian city of Ludivine.

The city of Teşhir was founded by the Parvana Monarchy in 1690 as a grand ceremonial capital. Political power shifted to Canan after the monarchy ended, and Teşhir evolved into one of Tarephia's leading financial centers.

As an Imanish-influenced society without the religious zeal of their neighbors, the Kazari took on a significant role in regional trade during the 14th and 15th centuries by serving as translators and intermediaries between their Serionic neighbors in northern Tarephia and the newly arrived Norlethans. The Parvana Monarchy increased the religiosity of the country's legal and social systems around this time in an effort to preserve what they viewed as traditional Kazari culture. At the same time, the Parvana created a separate legal and social system for the city of Cenet, which they declared açik-alan, Al-Kaza's first "international district."

Over time the monarchy grew more accepting of foreign influence, and the country was quick to industrialize in the late 18th century. Coastal cities thrived, and as the middle class swelled the Parvana created a hybrid political system that allowed for limited democratic representation in the palace advisory. When Prince Ziyaeddin Kerim Parvana died mysteriously days before his coronation following his father's passing in 1826, the resulting power vacuum threatened to destabilize the country.

The prince's death led to a three-year "cold civil war," with various royal factions vying for power. In 1829, with trade already declining, the military ended the monarchy overnight and established the modern constitutional republic in an event now called Sessiz Devrimi, or the "silent revolution." Several key members of the Parvana family simply disappeared, which curbed resistance from the deposed rulers. Ex-royals were permitted to retain a certain amount of wealth and status, and over time the Parvana assimilated into Kazari upper-class society.

Trade rebounded quickly after the Serssiz Devrimi, and Al-Kaza has thrived as a modern industrial republic. Today, the Kazari economy is centered on financial services, chemicals and materials science, technology, distribution and logistics, intellectual services (education, design, and arts/culture), and tourism.

The country is known for its private and public universities, and is a popular destination for international students. Today, there are three Açik-Alan zones where foreigners are allowed to live without obtaining a Special Residency Permit or "red pass" (in addition to a work visa): the metropolitan areas of Teşhir-Cenet-Ağız, Yamirajyat, and Canan-Yar. As a result, 93% of the country's 2.7 million immigrants and foreign nationals live in these three regions.

Notably, Al-Kaza has been one of the world's only officially atheistic countries since 1914; Kazari residents are allowed to practice any faith in private, but theistic religious gatherings are strictly prohibited. 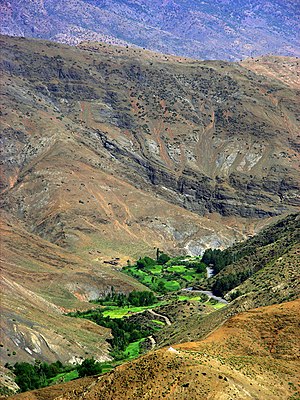 The mountainous Kaile Vaydi region is where Kazari civilization began.

Al-Kaza is bordered to the north by the Hesperic Ocean, to the west by the Enovria River, to the south by the Serion Desert, and the east by the Daj Sirasai mountain range. More than 10.5 million people (or four out of every five Kazaris) live in the near-continuous urban corridor that stretches, border to border, along the country's Hesperic coast from Yamirajyat in the west to Teşhir in the east.

South of the rocky coastal region lie the country's main agricultural regions. To the west are the rolling hills of the Katlanmiş Tepeler, where many of the country's sheep and goats are raised. To the east is the Tava Ylaili, or Al-Zumrut, "the emerald," a roughly diamond-shaped agricultural region known for producing grains, citrus fruits, vegetables, and—most famously—olives used to produce some of the world's most prized olive oil. Further south are the Daj Muazzam mountains which, with the Daj Sirasai, enclose the Kaile Vayde valley where Kazari civilization first took root.

Al-Kaza's Pasli Neyir region, in the country's southwestern corner, is home to several significant iron ore and copper mines, while the eastern portion of the country's slice of the Serion Desert contains several productive oil wells, though the country's oil reserves are expected to run out by 2050.

Due to Al-Kaza's location in a sloping region along the Hesperic ocean, there is significant climatic variation between the country's northern and southern borders despite the relatively short geographic distance. The coast features a hot-summer Mediterranean climate (Csa) while the interior features hot and cold semi-arid climate regions (BSh & BSk). South of the Daj Muazzam, the climate quickly transitions to a hot desert climate (BWh) in the Serion. On average, the country sees approximately 350mm of rain per year, most of it concentrated between the cooler months of November and February.