Móllaigh is a nation of Aorangēa on the northwestern coast of Youcesterland off the South Western Kartumian coast. It was never part of any Ingerish colony and was a founding member of the Aorangëan Federation in 1836. Its ethnical background remains a mystery. The local language seems to be an isolated language as no link to any other extant language had been found yet.

The name refers to a mythical witch named Móllaigh n'Gnuach. She is said to have sustainably liberated the valleys form evil sprits in the 13th century. Her success is widely praised as it is an established fact that no dragons have been sighted since. Critics on the other hand claim that there are no records of sightings before either.

Being located on Youcesterland, Móllaigh is bordered to the west by the South Ardentic Ocean and to the east by Nao Rānga, the only nation it shared a land border with, while the Southern Territories are found only 7km across the Shearburn Sound to the south.

Móllaigh's capital is Moolray, located at the central western coast at the mouth of the Bhaogh river. Much of the inland part of Móllaigh is covered by temperate rainforest, while the coastal part is mosly covered by orchards and pastures.

Móllaigh has a mild, rainy oceanic climate, having short winters with only brief bouts of cold or infrequent heavy snow, while those in the interior are colder because of increased altitude and latitude, but without the intensity or duration experienced at similar latitudes elsewhere in Kartumia. During winter on the coast, rainfall, sometimes relentless heavy rain, dominates because of consistent barrages of cyclonic low-pressure systems from the South Ardentic.

The extended summer dryness often creates conditions that spark forest fires, from dry-lightning or man-made causes. Many areas of the nation are often covered by a blanket of heavy cloud and low fog during the winter months, in contrast to abundant summer sunshine. These weather phenomena may have been the origin of several myths and folklore, including fire spitting dragons or witches brewing smoky potions.

Móllaigh's economy was largely based on livestock farming in the late 20th century, exporting wool, dairy and meat mostly to mainland Kartumia and the Federal States. In recent times the focus shifted towards to more local, traditional and vegetarian alternatives, mostly in the form of forest berries. Some of those are poisonous, but nevertheless uses in tradional recipes for recreational or medical use. Many pastures have since been re-converted to forest-like orchards to allow for a semi industrial way to harvest those.

There is archological evidence of human settlements from at least 2 500 years ago. In the 7th century Kartumians arrived from the continent to Youcesterland and pushed the original population into the area which comprises today's Móllaigh nation.

During the era of Ulethan immigration the area was not colonized in an organized way, but a significant number of Ulethans settled there independently. In 1840 the tribes of Móllaigh eventually became one of the founding members of Aorangēa.

Contrary to any scientific evidence, the belief in witchcraft is ubiquitous and is a major factor in Móllaighan culture. There are numerous credible records of sightings from centuries ago. Alas, since the invention of photography the number of sightings has decreased, while claims of malfunctioning photographic equipment has significantly increased, which itself counts as an irrefutable proof for witchcraft for many. During the period between 1924 and 1937 defamation as a witch was a popular theme for political persecution. 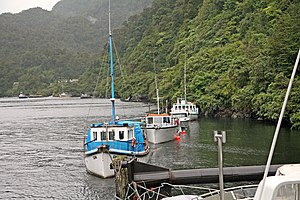 Waikaori is a nation of Aorangēa located on both shores of the Seven Lakes Passage, which separates Kiranēna Island from Youcesterland. The regions is well known for its fjords, which form a major obstacle for the nation's landborne transportation.

The name is of native origin and roughly translates to "The Blue Lands" and refers to the Seven Lakes Passage, which is considered home to several ancient deities. From 0000 to 0000 the area was also called Yonder Youcestershire.

Located on both shores of the Seven Lakes Passage, Waikaori borders four Aorangēan nations and territories. In the south and east it shares a border with the Southern Territories and with in the north and west with Nao Rānga, in both cases on both sides of the passage. In the north east it has a border with Upper Youcestershire and it also borders Nether Youcestershire through exclaves.

The Seven Lakes Passage consists amongs others of Lake Kiranēna, the Waikaori Sound, Lake Waikaori and the East Waikaori Lake. Apart form the coast in the west which belongs to Nao Rānga, most of the coast belongs to Waikaori.

In 1840 the tribes of Waikaori eventually became one of the founding members of Aorangēa.

Elleah was founded in the first half of the 17th century by Kartumian traders from different nations. With a port open to most nationalities, it became a successful regional economical power. However, rivaling Kartumian ports and countries tried to gain influence in Elleah for strategic reasons. In 1877, when the threat to the security of the city became to large to cope with, the city decided to join the Aorangëan Federation.

The Southern Territories cover most of Kiranēna Island and the southern parts of Youcesterland. It is not part of any nation and is administrated by the Aorangëan government and the Southern Territories Council. The majority of the population lives in the northern tip of the territory where the tourist resorts of Yorakēa spawn into the territory's most accessible and farmable regions.

When Aorangēa was founded in 1836 the mostly uninhabited areas in the south became the Southern Territories.

The Southern Territories are a mountainous region with many lakes and fjords and covers the central and southern parts of Kiranēna Island as well as the southern tip of Youcesterland. The area is mostly covered in temperate rainforest, some higher elevations are grasslands or heaths. The western half of Kiranēna Island is dominated by mountain ranges and fjords, while the eastern half is dominated by a central valley and smaller mountain ranges on the eastern coast. The Seven Lakes Passage separating the two major parts of the territory plays am major role for the territory's accessibility. The southern coast of Youcesterland is also mostly mountainous terrain is also sparsely populated. 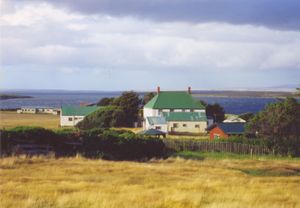 The territory is home to the highest mountain of Aorangēa, Grafshire Peak, which is located in the unnamed mountain range. The area also features the largest collection of glaciers on the islands. Despite its remoteness, the peak of Grafshire Peak can easily be accessed by the Sea'n'Ice Railway from Yorakēa. The southernmost point of the territory and also of Aorangēa is found at 58°36' S

The two largest "islands" of the territory are in fact part on the mainland, but being separated by Lake Shackleton and Lake Bellingshausen they are traditionally referred to as islands.

The Government's buildings andsome surrounding land are located in the Government's Territories to avoid having the federal government inside any of the nations. Most of the territory is found in Whangiora, Anglesbury.

The only military base is the Broom Lake Base near Whangiora and surrounded by Anglesbury.

The polar base on the Southern Islands is treated as Aorangëan territory for administration purposes without claiming sovereignty over it.

Wāhakea is an Ingerland Overseas Territory.

The Moonshine Islands are an Ingerland Overseas Territory.