Dematisna is a country that straddles the Strait of Abren, with its western half located in Tarephia and its eastern half in Uletha. It sits between the Hesperic Ocean and the Sea of Uthrya, and shares borders with Sathria and Egani to the northeast, and Al-Kaza and TA026c to the southwest. Due to the strait's historic importance as a major maritime route, the area has served as a crossroads for millennia. It has a rich history and an identity of religious and cultural diversity.

The country remains a major shipping center today thanks to the geopolitical importance of the Strait of Abren. While Seniqe was the main Abrenic port for millennia, containerization led to the extensive development of port facilities on the eastern side in the latter half of the 20th century, centered around the city of Iqrahan. Seniqe remains the country's financial and commercial heart and its largest city, while Asithane is the center of the Dematisnan government and international relations.

The country is a federal republic, made up of four Autonomous Regions and the special district of the Zona International Abrenic (ZIA) at the northern entrance to the strait, known more commonly by the metonym La Avanzada. Following the nation-building projects of the 1970s and 80s, modern Dematisna has a strong regional identity and culture, known for the intermingling of influences from the different ethnic groups and religions that have controlled the strait throughout history.

The country of Dematisna takes its name from one of the ancient names for the Strait of Abren. Early Chalnics in the area referred to the strait, which separated the known Hellanesian world from the vast and mysterious Tarephia to the southwest, as "dáma tis Daná," the moat of Dana. Dana is believed to refer to a scholar or explorer who visited the Chalnic Peninsula from across the strait; to the Hellanesians, it would have simply meant "the wise one."

The strait took on an early version of its modern name when it served as the capital of the Kingdom of Al-Abarren. The name was Castellanized in the 15th century CE to Abren. While there was talk of changing it back after the area gained its independence in 1969, the new government ultimately decided that the historical name would make a fitting moniker for their young and unified country, and cause less confusion than a renaming of the strait that was already so important to world trade.

A painting depicting Seniqe under the reign of the Kingdom of Al-Abarren
Recorded civilization in the area dates back to the First Ionean Empire, ca. 2000 BCE, while the country's largest city, Seniqe, was founded somewhere around 1400 BCE and shortly thereafter became the center of the Kingdom of Al-Abarren, part of the larger territory controlled by the Serion Kings. The eastern side of the Strait of Abren developed more slowly, and remained largely agrarian until around 1000 BCE, when the city of Iqrahan was established. After a brief period of Pohenician control in the west, both sides of the strait were united for the first time in the 5th century BCE under the Hellanesians.

Early Christicism was introduced to the area under the Chalnic Empire, and in the 7th century CE Asithane became the main focus of the region, experiencing its first great boom. Seniqe and the west fell to the Imanish crusaders of Serio-Imanish Caliphate just a few centuries later, re-establishing the east-west divide along the Strait of Abren that had existed before the Hellanesian unification. The two sides remained distinct—often cautious allies but sometimes competitors and even enemies—until the arrival of the Castellanese in the 1450s CE. 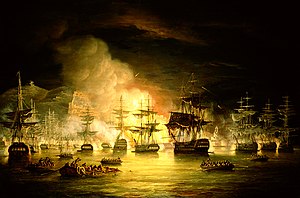 The Castellanese take the port of Iqrahan
The Castellanese controlled a large swath of the northern Sea of Uthrya during this period, and treated the area around the Strait of Abren as a single colony with one government, closely tied to the Ortholic Church. This marked the formalization of Dematisna's modern borders for the first time. It also led to frequent conflict in a region with such a rich and varied religious history, eventually forcing the colonial government to adopt the more tolerant policies of La Distensión (Detente), from the 17th century CE onward. Still, long-simmering tensions boiled over around the turn of the 20th century, and after a series of conflicts caused trade interruptions along the Strait of Abren the major Ulethan powers stepped in and, in alliance with some of Dematisna's more stable neighbors, established the Zona International Abrenic, or ZIA, in 1902. Controlled by countries from multiple sides of the conflict in the Great War, the ZIA became a major center of international dialogue (and espionage) during the mid-20th century.

When the Assembly of Nations was established in 1966, Dematisnan independence was one of the first major issues taken up, as many people in the area had developed strong ties with high-ranking officials in governments and influential organizations that were now working to create this new global peacemaking organization. Independence became official in 1969, and Dematisnans were quick to establish a series of changes aimed at creating a model democracy, with one of the most generous immigration policies in the western world. The country's economy boomed, and the combined metropolitan regions of Seniqe and Asithane (named the new administrative capital in 1970) grew into a megacity that today is home to more than 12 million people.

The mountainous north
Dematisna's identity is shaped by its geography—or more to the point, its most famous geographical feature, the Strait of Abren. While the strait has always been an important center of commercial, cultural, and intellectual exchange between different social and political groups, it has also served as a dividing line as often as not. This duality is reflected in modern Dematisnan society: to the west of the strait, Mazanic languages are dominant, while to the east, Romantish language dominates.

The two sides of the country are each subdivided into two Autonomous Regions. The northernmost, [TBD], is high and mountainous, with a rocky coastline. Here, the country's highest mountains rise along the northern border with Sathria. There is an inner plain along the border with Egani with a strong agricultural community, but population in the north is relatively sparse. Below that, from the eastern side of the Strait of Abren to the Eganian border, is the country's primary agricultural region, [TBD]. Its center is mountainous and remains thickly forested, but the northern and particularly the southern coasts are fertile and rich, fed by mountain streams. The rocky coast along the strait creates a dramatic setting for the national capital at Asithane, and its surroundings.

A favorable coastal climate supports the region's famed olive orchards
Just across the strait, the region of Seniqe (centered on the city of the same name) features a relatively low mountainous center, with fertile plains along the coast, known for their vineyards and orchards. The lake country in the west meets the fortress-like Daj Sirasai range along the border with Al-Kaza. To the south, the more arid [TBD] region is largely flat, and known for its sprawling olive orchards, which give way to the Serion Desert in the far southwest, along the border with TA026c.

Stretching more than 680 km from its northernmost to its southernmost points, located between the oceanic influences of the Hesperic and the calmer waters of the Sea of Uthyra, Dematisna features significant variations in climate from one region to the next. Broadly speaking, the north is generally colder and wetter, while the south is drier and hotter. In coastal areas, winters are cool and rainy, and summers hot and humid. In more mountainous areas, temperatures can drop below freezing during the winter with heavy snow cover. In the deserts and scrublands of the south, meanwhile, there are areas that see just a few inches of rain in an average year. As one might expect, skiing is popular in the north—while government incentives have produced forests of solar panels on the rooftops of sunny southern cities. 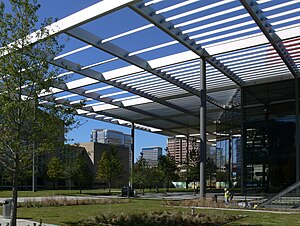 The modernist Supreme Court complex in Seniqe
Dematisna is a federal republic, made up of four Autonomous Regions and the special district of the Zona International Abrenic (ZIA). The federal government is divided into three branches, with the executive and legislative branches headquartered in Asithane, and the judicial branch in Seniqe.

The legislative branch has a bicameral house of representatives. The Senat is the upper house, and is comprised of 35 senators—seven for each Autonomous Region, two for the ZIA, and five additional non-voting "observers" for the ZIA member nations. The Congress, the lower house, is comprised of 255 representatives, elected by direct suffrage. The President of Dematisna is elected by the Congress and approved by the Senate. The current President is Vasia Pachis, who is serving her second of three possible consecutive terms.