Dento is one of the world's largest high-precision manufacturing companies. It was founded in 1921 by Ruensa-Shidokyaei Dencho in the city of Wenzū, Kojo; the companies headquarter and largest research facility is still located in the city. The company was successful in creating an excellent international reputation both for highly complex manufacturing and research products, as well as a producer of high-end luxury goods. It is by far the largest exporter of Kojolese goods and most highly valued company, thus playing a major role in the Kojolese economy overall.

Its stocks, of which 67% are held by the Dencho family, are traded at the Pyingshum Stock Exchange.

On a business level Dento is organised in departments, each responsible for a certain product segment. However these departments work tightly together, for example every department will develop commercials for their products while simultaneously consulting with the Corporate Identity department. Currently, these departments are:

Dento has several production plants and research centres in Kojo.

Its headquarter is situated in Wenzū, where the new site was officially opened in 1988 in combination with the large scale urban transport project Wenzū Kágaldosim Tunael. As a result the Management, Corporate Identity and Opinion research department has its head office here. Production wise the plant is the location for the final assembly of nearly all glasses and wristwatch lines, and also contains the R&D centres for these products as well as the development laboratories for several other production lines such as machine components. Public relations wise, the former headquarter in the old town of the city now is used by the Dento trust, which coordinates the charitable work by the Dencho family, houses the official, world-wide flag store (although the second flag store in Pyingshum is several times larger and attracts rich shopping customers from all over the world) as well as a museum concerning the company's history. The production plant itself also attracts many visitors, as it offers a wide range of guided tours through the assembly halls and research areas.

In Pyingshum the company has a logistic and packaging centre at the Pyingshum International Airport, its largest store world wide on Sátarditué-daitō in Daiamondoshi-Pang and its secondary headquarter in Chinkágaldosim-Pang.

In the old manufacturing city of Kippa traditionally has been an important manufacturing location for Dento's heavy machinery and other capital goods used in the manufacturing industry. In 2001 they moved their plant to the newly rezoned old harbour area next to the new Kippa university. Since then robotics engineering and research in general noticeably increased.

In Hetta Dento is represented with a research and production plant related to bio engineering, medicine, capital products for the pharmacy industry and general chemical engineering operations. This was both a reaction to and further strengthened the position of the city as a "Research Cluster for Bioengineering" in the BMS University Ranking.

parts of an assembly line made by Dento

One of the largest product division is the production of high end, mostly automated manufacturing machinery. It is used world wide on assembly lines for everything from cars and PCs to toys or beauty products.

A few years after the company's foundation as a luxury good supplier, it started expanding into the field of household appliances. Especially since the 1960's the company built an excellent reputation for all type of electronic kitchenware, most famously the Táranji, an all-round kitchen helper that does everything from mixing and chipping to cooking and cooling. 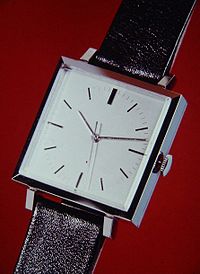 one of the first watches produced by Dento

Ruensa-Shidokyaei Dencho started the company as a watch maker, and to this day Dento sets world standard in terms of quality and precision when it comes to wrist watches. It has also expanded into other areas such as glasses, perfume, handbags and even an (albeit failed) smartphone line.

a microscope by Dento

If a microscope, distillery or centrifuge in any laboratory on the world doesn't bear the Dento logo, one can be sure that it contains at least one part manufactured by the Kojolese company. Dento's expertise in the production and retail of scientific and medical instruments is among the highest in the world, and the company keeps several branch offices in important science clusters all around the world and Kojo to be in tight contact with its professional customer needs and wishes.

a machine component by Dento

Dento also has a wide range of high-precision components used by other companies for their production lines, such as engine components or all possible types of lenses.