The Gobrassanya tornado belt is a designation for areas in Gobrassanya with a higher occurance of tornadoes than the average.

The term was defined by the Gobrassanya National Weather Service (GNWS) in 2000 for better structure of the severe events.

The largest area are the central plains southwest of Gobras City. Due to the size of the plains thunderstorms have a large area to build. The cold and dry air from the ocean has a short way and no obstacles. The cold airflow has the chance to attack from north and east because of the Tasmal Mountains which allow the wind to flow up to 100km into the landsite and then leave it. The warm and moist air from Hasard airflow leaves the central mountains with high movement speeds up to 60km/h. It pushes the cold air and creates rotation under the right conditions. 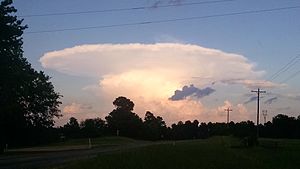 The Gerecho plains are another area in Gobrassanya with a high density of yearly appearing tornadoes per 100 km² per year with values of 9 or higher. The Daveson Airflow (cold and dry air) arrives from the ocean and has the chance to impact directly or to follow the Caane mountains northwestern of Gerecho plains to drift into the plains from northwest. Most of the several tornado outbreaks happened in Gerecho plains. Because of the good conditions like the flatten terrain the plains became a magnet for storm chasers from all around Gobrassanya and even from foreign countries but again and again storm chasers get hit by tornadoes because of the unpredictability of the storm systems. Tornadoes are often surrounded by precipitation in this area which makes severe thunderstorms dangerous.

The Grand Lake region is known for many water spouts which mostly appear in may and july of the year. Some tornadoes appear also over land area.

The Arcois flatlands have a tornado density of 6 tornadoes per 100 km² per year.