Iscu is an island country located in the continent of Uletha, in the Asperic Ocean.

The territory continued to grow in population over the next 200 years. It also became more autonomous during this time, and in 1680 a permanent governor was appointed to the islands, ending direct rule from Ingerland , because although the governor served as a direct representative of the wishes of the Ingerish government, he was allowed to govern with a fair degree of freedom.

A drive for independence s succeeded in 1814, and Iscu became the republic it is today. An interim constitution was enacted by Ingerland where the current governor would remain for four years with a mandate to ensure a peaceful transition and implement a democratic constitution created by the people. This succeeded, and the governor, William Kinnon (who was the first Iscuan-Born governor), became popular enough for his efforts that he was elected the first president. It suffered from independence at first, becoming poorer without the support of Ingerland, but a series of economic policies helped it stay steady, although it was certainly a developing country.

Iscu steadily grew in the 1900s, and became a reasonably successful country, although most inhabitants were still very much on the edge of poverty. A mining boom entrenched the richest in Iscu, while leaving behind most of the population. This began to cease around the 70s, as a series of policies designed by the government came into sway as Iscu enjoyed a rapid boost in HDI and lives overall greatly improved. However, after a scandal the government was forced out and the Conservative government that followed became plagued by corruption and greatly set back the nation, which only began to recover and begin to improve in the late 1990s.

Iscu has grown both in population and in economic size, and is gradually becoming less and less low-income. However, a lot of near-poverty still remains. The country has become a strong advocate of Green Energy, especially as it becomes clear that the atolls of the country only have 30-50 years left before they are completely gone. 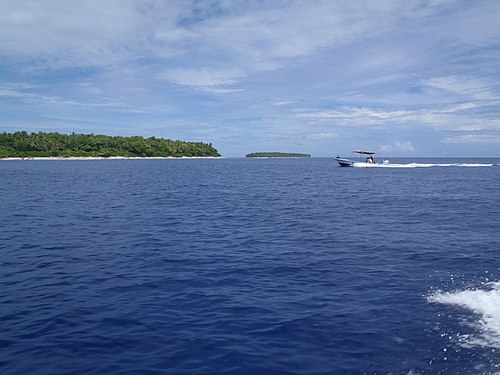 View of part of Loconon Atoll

Iscu has a warm climate all year round, and gets a decent amount of rain all year as well. The tropical island climate is well suited for a diversity of species, many of which can only be found in Iscu. Sadly, due to climate change Iscu is sinking, and by 2100 all of the atolls and islands other then the main two islands will likely be underwater. [6]

It is rare for Iscu to get any large storms or other massive weather phenomenon; the last severe storm that has been recorded was in 1823, and was described as thus by the captain of an Ingerish ship in the area:

The wind shook most dreadfully, and the waves seemed to be a darker and more malevolent black-grey then I thought possible. The warm breeze and pleasant seas of a few days past had vanished, and we were forced to take shelter from god's almighty wrath in the small town of Port Holy, where the wildlife was in frightful flight as the rains lashed the ground with the whipping of the holy spirit. The storm passed after a day or so, and I pray that I will never need to see one like it again.'

Because of the warm climate and predominantly sunny skies, the country is known as the "Asperic Paradise", and was a common vacation destination for Ingerish nobility for some time.

Iscu is a democracy, and has a three pronged governmental structure composed of the following parts:

The parliament is composed of democratically elected representatives. Elections take place every four years, and the Ministers of Iscu are picked by the parliament. Ministers are generally representatives . The next election is in October of 2020. The judicial prong consists of the judicial system in Iscu, and is headed by the High Court, which is composed of two appointed judges and three democratically elected judges, and elections are held whenever an open spot is created. The last prong, is composed of the president and the vice-president, who is the head of state and technically leader of the parliament. In addition to the general executive powers, they are also tasked with either denying or approving all the bills that the capitol produces. The vice-president aids the president in his endeavors to maintain law , etc, in Iscu.

Iscu has little military, but does share a joint base with the

Green=Other Iscuans
Iscu is composed of the Native Iscuans, Ingerish Iscuans, Lentian Iscuans, and Iscuans of other descent. The divisions are fairly blurred between the colonial Iscuans after over 200 years, but some cultural and physical separation remains. Demographics in Iscu have never been much of a problem, and many people believe that dividing colonial Iscuans up only serves to emphasize the divisions that exist.

The crime rate in Iscu is notably low, with only 50 crimes of all types reported in 2018, and out of which only two constituted a murder. [9] Most crime is petty, especially on Loconon Atoll, which is noted for its pickpockets. [10] The police, fire services, and medical responders are all administrated by the government, and hospitals and pharmacies are a mix of both private and government owned companies, and all are strictly regulated by the Ministry of Health. Police are generally well regarded by the public, and are also technically the land army of Iscu. [11]