This page is also available in Everian.

Leresso, officially the Leressan Republic, is a country located on the southern coast of western Antarephia. Leresso is bordered to the north by Stature, by AN141c to the East, and by the Hesperic Ocean to the south and west. Its capital is Aludres, which is also the largest city. It is a small country of 37,000 km² (≈14,280 sq mi) and has a population of just under 10 million.

It is unknown where the name "Leresso" comes from, though it is widely believed that the name is a rough transliteration of the native Everian name Yaruva, meaning "big land".

On May 19th, 1849, Leresso gained independence from Ingerland, sparking a surge in cultural rehabilitation and a quest for self-identity.

As a new nation, Leresso began the transition to a manufacturing economy much later than other Uletarephian nations, and took much longer to complete the process. While most powerful nations began industrializing in the 1760s and finished around the 1840s, Leresso did not begin until the 1850s and most sources agree it took as long as sixty years for Leresso to become industrialized.

Due to its small size, Leresso does not experience a vast array of climates as one might expect from the topography. Generally, the Leressan climate is classified as Csa, with regional variants. The coast typically has the most stable climate, whereas further inland the temperatures begin to vary more, with hotter summers and colder winters, as moisture from the ocean is too far away to regulate the inland climate. The Leressan Climate is mediterranean, with warm, sunny summers and cool, mild winters. The average temperature throughout the year stays generally the same, which is in the mid- to high-60s (F).

Leresso is divided into 8 regions, plus a special administrative zone for the national capital, Aludres.

Leresso is situated in western Antarephia, and is slowly becoming the cultural, economic, and political powerhouse of the region.

The Leressan Parliament as of 2018

The government is structured around a parliamentary system.

The Leressan Parliament constitutes one representative from each county. On average, each province holds thirty counties, thus thirty representatives. A final representative to Parliament is determined by a national election to chose the High Parliamentarian. As of the 2018 election, each of the 211 seats are held by a member of one of 13 various parties covering a large range of ideologies, from the far-left Anarchist Party and the PPKR to the far-right Fascist Party and Rumàe Party. Currently, the Leressan Progressive Party, known colloquially as LPP, holds a plurality of seats in the Parliament, and as such, the current Prime Minister, Letişi Mụzea, is a member of this party. The best-known coalitions in the parliament are the Moderate Coalition, consisting of the LPP, Green Party, Gever Party, and the International Party; and the Everian Coalition, consisting of the LNP, Hyamadài Party, and the Sallanist Party.

In Leresso, every county has its own Regional court. Similar to the Federal States, the Leressan judicial system includes an appeals system, where a plaintiff may appeal a Regional Court's decision to a Provincial Court. If the Provincial Court's decision is unsatisfactory, the plaintiff may appeal to the National High Court, which is the head judicial entity in the country.

As a small regional power in Antarephia, Leresso maintains strategic economic, political, and military alliances with its neighbors, as well as the other continental powers of Antarephia, such as Guai, Paxtar, and Ullanyé. Leresso also has a notable presence in northern Tarephia, given its embassy in Al-Kaza. Perhaps the country's most vital trade partner is the Federal States, being Leresso's biggest importer and contributing a sizeable amount to the Leressan economy.

The Leressan economy is mainly based on the service, manufacturing, and agriculture sectors, as well as the mining and tourism industries. It ranks as the world's thirty-second largest economy and in 2018 generated a nominal GDP of approximately $114 billion.

The country has a large welfare state, providing health cover, education to postgraduate level and other social services to citizens. As a result, taxation is perceived as being higher than in many comparable countries, but this must be considered against the consistently high results in international standard-of-living and quality of life surveys. Karolia also scores highly on rankings of pay equality and gender equality in public life.

Financial institutions contribute a large share of the country's GDP. The stock market is located in Osmila and lists 70 companies in its top tier.

Leresso uses the drivan (֏) as official currency. First introduced to Leresso and West Kadmar in the summer of 1889, the drivan proved to be a more efficient currency to exchange than its predecessor, the Ingerish pound. The drivan is produced by the Leressan National Mint located in Aludres and circulates around the country. It is not used by any other country. The Leressan currency comprises coins of 1 drivan and 10 and 50 cent denominations and notes of 1, 5, 10, 20, 50 and 100 drivan denominations. 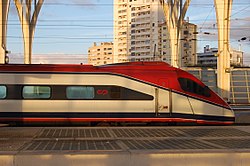 A high-speed train in Leresso.

There are four major high-speed rail routes in Leresso:

Everian uses the Kadmaric Alphabet, a writing system with no known connections to any other writing system in the world. Like most southern Antarephian nations, Leressans take pride in their unique language and consider it to be integral to the national identity. It is also one of the few non-Romnantian writing systems in the world with a unique punctuation system. It has 32 letters.

The education system is regulated by the government. Almost all schools in Leresso are public, save for a few international schools in Aludres. Birth year determines when a child is to start their education. The year in which a child turns six years old is the year they enter the Leressan education system as a Year 1 student (Ղասօծ 1). Students remain in primary school through Year 7, the year a student turns 12. The year in which a student turns 18 is the last year of secondary education, known as Year 13 (Ղասօծ 13). In Leresso, the school year starts in late February and ends in late November, lining up with the austral summer. All primary and secondary schools start on the same day.

During Year 13, students prepare to take the University Entrance Exam, known in Everian as Ikavtàimạsi (Ւղարպացւմօսւ). The exam only applies to national universities, and is a mandatory test all Leressan citizens must take in order to complete their secondary education. International universities with campuses in Leresso are permitted by the government to set their own admissions process, but this must be done in conjunction with exam preparation. In recent years, Leressan students have seen international universities and their admissions processes as an easier way to continue their education, resulting in government pressure causing international universities to drastically decrease the incoming class size and providing even more government resources to national universities. The test takes place during the first week of October, over the course of two days. The first day constitutes a Mathematics and Ingerish exam, and the second day constitutes a Science and Everian exam. Each exam is 80 minutes long. There are strict noise ordinances in effect nationwide on testing days, with severe consequences for anyone in violation of these noise ordinances.

Healthcare is not hard to find, due to the frequency of Hospitals. found in cities. According to the Leressan Demographic Healthcare Coverage Survey (LDHCS), the city with the most healthcare coverage, and the healthiest citizens, is Montecari.

Death happens still, but in Leresso, it is hard to believe that 2% of the annual deaths in Leresso are due to avalanches. Avalanches are somewhat common, and they, for the most part, take place on the eastern slopes. It is there that they get the most snow, due to the weather patterns of northwest Antarephia.

There are several holidays that are nationally recognized by the Leressan people.

An image of traditional kishyatom with buttered tovtam. The traditional Kishyatom is believed to originate somewhere in Western Leresso, either in Southwest Avilan, Kadantra, or Palomar Province.

Leressan cuisine is very vibrant. Most of the cuisine revolves around floral, herbal, and hearty elements in the food Leressans typically make. Here are a few dishes of note: