This article is about the city. For the comarca, see Mondeonís (comarca).

Mondeonís is the capital city of Jardinia. It has more than 28,000 inhabitants and a metropolitan area of approximately 100,000. The city is located in central Matano Island, in the Mondeonís Peninsula, and is crossed by Onis River.

Jardinia International Airport, although not technically located in Mondeonís, was built where it lays because of its proximity to the city. In fact, it is sometimes called Mondeonís Airport. 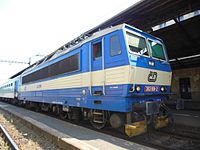 In 1996, the Mondeonís Terminal Station was built together with the Mondeonís-Vonga railway line as a part of the Matano Rail Corridor. As of 2021, this line remains the only operative one of the whole project.