Nao Rānga is a nation of Aorangēa located on all its three major islands (Anglesbury Island, Youcesterland and Kiranēna Island) off the South Western Kartumian coast. It was never part of any Ingerish colony and was a founding member of the Aorangëan Federation in 1840 and is divided into four districts. The districts don't have sovereignty, which means their territory, government and responsibilities can be changed by the Nao Rāngan government.

The biggest city of Nao Rānga is Otāngia. The city is famous for it's ancient castle which built by the Some Ancient People, and has been ever expanded and adapted to the current style of architecture since.

The ski resort of Yorakēa is a famous tourist attraction, which attracts nomerous visitors from overseas, for being one of the largest skiing area of the southern hemisphere. Visitor numbers have quadrupled since the 2010 Winter Games were held in Yorakēa.

The name is of native origin and roughly translates to "The Blessed Valleys" and originally only referred to the southern part of the nation. Only after a unitary statehood was formed when the tribes united it started to refer to the entire nation. 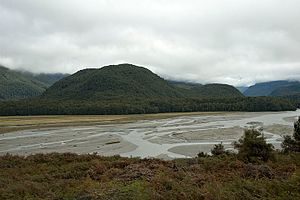 During the colonization period, most of the native population gathered in these areas while the colonists focused on areas which later became Anglesbury and the Youcestershires.