Drabantia is a unitary parliamentary constitutional republic. The President, who has limited powers, is the formal head of state, the Prime Minister is the head of government. Government of Drabantia, reporting to the lower chamber of the Parliament, holds executive power. Drabantia has a bicameral legislature consisting of the Chamber of Deputies with 160 members, and the Senate with 81 members. The political system is multi-party. Drabantia was rated a "full democracy" in 2017.[1]

The country has been a republic since 1915. In the 1940s, following economical turmoil, the political situation shifted in favor of far-left parties. The late 1990s saw the rise of centrism and economic liberalism, represented by the Liberal Democratic Party and Green Party, the number one and three (respectively) largest political parties as of 2018.

Drabantia's constitution characterizes it as a unitary republic. It is the supreme law of the country. The Constitution defines territorial integrity, the governmental system as well as human and civic rights. The Constitutional Court oversees issues associated with the constitution. The current constitution is in power since 1915 with multiple amendments made since.

The President is elected indirectly. They serve 5-year terms and can only be reelected once in their lifetime. The President (among other things) appoints and recalls the Prime Minister and heads of diplomatic missions, signs enacted laws, ratifies international treaties and represents the State abroad. The President resides in the Presidential Palace in Krále Hora. Radovan Bašta currently serves as President. He was elected in 2015.

The Government of Drabantia, also called the cabinet, consists of the Prime Minister and 14 Ministers. The government sets the agenda for most foreign and domestic policies. It has to receive approval from the Chamber of Deputies before entering into power. Similarly, the Chamber of Deputies can vote to dissolve it. The current cabinet was sworn in on July 27th, 2018. 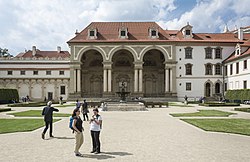 The seat of the Senate in Krále Hora

The legislative body of Drabantia is a two-chamber parliament.

The Chamber of Deputies (Poslanecká sněmovna) is the lower chamber. It has 160 members, which are elected for a four-year term in a proportional representation election with a 5% threshold. The upper chamber is the Senate, which has 81 members elected for a six-year term by two-round runoff voting. The Parliament holds and passes bills, ratifies international treaties, decides on military missions and has the right to modify the Constitution. The Chamber of Deputies resides in Odrava, the Senate in Krále Hora.

Chart showing the results of the 2018 Chamber of Deputies election

In regional and municipal elections, local parties often win the majority of votes.[2]

Parliamentary elections take place every four years. 160 members of the Chamber of Deputies are elected by proportional representation with a 5% threshold. 27 senators are elected every 2 years for a 6-year term in a two-round runoff voting. Municipal and regional elections are held parallel to the Senate election.

The president is elected indirectly by the parliament every five years.

The legal voting age is 18 years. 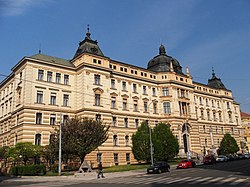 The Supreme Court is Drabantia's highest court of appeals in a four-tier system. The Constitutional Court has 15 members appointed by the President with approval of the Senate, and rules on constitutional issues. The Supreme Administrative Court rules on procedural, political and administrative issues. Drabantian courts are defined as independent by the Constitution.[3] Most higher courts are seated in Lipice, as a counterbalance to most of the legislative institutions being seated in Odrava.[4]

Drabantia is divided into 10 regions (kraje) including Odrava, which has the special formal status of a capital city. Regions are then divided into 69 districts (okresy) which are also local seats of various institutions of state administration. The country is also divided into 153 townships (obce s rozšířenou působností, abbrev. osrp), which run parallel to districts. Townships are grouped into 81 constituencies, which are used for parliamentary elections. [5]

Drabantia is a founding member of the Egalian Union and is also a member of the Assembly of Nations and all associated organizations, Academic Support International, Ulethan Alliance for Culture and various sports associations.