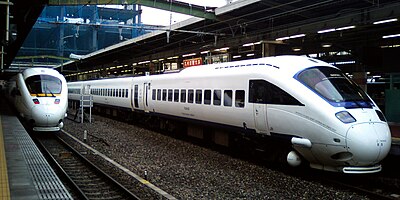 Rail transport in Izaland is provided by different companies, mainly being:

Todays controls most of the rail network in the country, including the high speed railway, with the subsidiary IZX (the thick line in the map on the right).

Most of the railways in Izaland are built in standard gauge (1,435 mm), including the high speed railway, allowing thus interoperability with the former railways. Some local lines or subway lines have also different gauges, such as 1,067 mm or 1,544 mm. The usual distance between tracks is 5,5 m from the edges.

Almost the 86% of all the railways in Izaland are electrified (overhead lines, 25000 V 50 Hz AC for high speed rail and 3000 V DC for local lines). Non electrified lines are mainly run by hybrid trains or battery trains. Since 2014 Izaland, in order to diminish CO2 emissions, started a massive program of withdrawal of diesel trainsets and locomotives.

In Izaland everyday XX million users ride on different kind of trains, especially in the main urbanized areas. Basically in Izaland Railway services are divided into the following categories:

Railways have played an important role in Izaland since their first diffusion in the 19th century, with the first line opened between Sainðaul and Kawayatsu in 1845.

A train that stops at every station is called a local train (普通列車, futsōn-ryessha). Trains that stop at fewer stations and are therefore faster than local trains are classified as Rapid (快速列車, kwaisoku-ryessha), Express (急行列車, kyungyō-ryessha), Limited Express (特急列車, tukkyun-ryessha), etc. and may require surcharges depending on company policies.

Izaland counts 11 cities with a population over 1 million inhabitants. In these and also less large cities, Izarail, altogether with locally administered subway networks and private railways, operates several commuter lines, using either existent railway tracks and newly built ones, to move million of commuters every day.

The second city of Izaland, Warohan also boasts an extensive railway commuter network to link the city center with the many mid-sized cities located in the metro area, such as Eyenniyul, Yatatoshi, Katasogi, Muanake and more. Besides the Izarail lines and, of course, the metro, Warohan has also a mentionable extension of private railways.

Panairail is the nickname of the railway corridor serving the third city of Izaland, Panaireki, especially stretching on a north-south direction from Nugamochi to Shin-Shikarana.

Kichatsura suburban railway network opened in 1999, linking the city of Tomekiha to Nugamochi. Some services are integrated into the Panairail network.