Sae, officially the Democratic Republic of Sae is a country in North Archanta, bordering Krajanesia to the east and surrounded by the Asperic Ocean on all other sides. It has a warm equatorial climate, and is very quickly growing, both in terms of population and economy. Its capital is Keidu.

The origins of the name Sae are uncertain, although it most likely comes from one of the towns that arose in the territory around the 5th century. A possible candidate is Kime'h Sai, which for about 200 years had control over a considerably large territory in eastern Sae.

Sae occupies the western part of the island that also contains Khet Ikh and Krajanesia. It is centrally traversed by the Saeian mountains. The highest point in the country is Mount Jume Kor, which reaches a height of 2591m. The mountainous area is mostly covered by rainforest. The vast majority of the population lives in plains near the sea. The Laoko archipelago is located in southern Sae and contains islands mostly formed by volcanoes, although none is active today.

Sae has a mainly equatorial and tropical climate. Temperatures are warm year-round. Monsoon usually blow in June through September and in December through March. Typhoons and large-scale storms pose little hazard in Saeian waters except in the strait that separates the country from Lorotoban.

Humidity is high in the whole country.

Archaeological evidence indicates that humans first arrived in Sae around 55,000 to 50,000 years ago.

Around 300 BC various towns formed and gained relatively stable control over most of Sae's territory. In 193 BC, King Otar Mbor ruled over a kingdom that went from Rama to Khuai Do.

When Otar Mbor died, his kingdom wasn't able to maintain power and was quickly conquered by a population which until then had resided in Upper Sae, the Kheu Cang. Their ancient origin is uncertain, but it's likely that they had first set foot on the island about 100 years earlier, coming from a territory near the northern tip of Archanta. The motives for this long migration are uncertain. 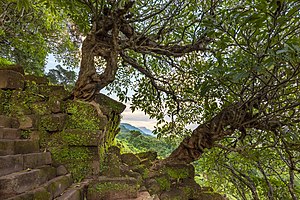 The ruins of Jor Lgonom

The Kheu Kingdom was established, and during this time many of the major cities that exist to this day in Sae were founded. The language spoken by the Kheu Cang was almost completely different from Jigor Maulues, which was natively spoken on much of the island, and there was a fusion of the two. To this day, about 20% of the Saeian language's vocabulary originates from the Kheu Cang language.

In 31 AD, the Lauta, coming from the continent of Uletha, colonised the north of Sae. They spoke a language similar to Romantian, and 'imported' their culture in the territory. There was a war between them and the Kheu Kingdom, resulting in a pact, according to which the two would have continued to rule over the territory at the same time, controlling different parts of the government. The state of peace lasted until 406, when internal problems caused a fall of the Kheu rule. The Lautan Kingdom now had control over the whole territory.

A relief in Tokima depicting the king's court

From 650 to 932 various attempts of the remaining Kheu Cang in Upper Sae failed to regain power over the territory, but they did significantly reduce the strength of the Lauta. In fact, in 1127, the first major non-kingdom power emerged in Toai: the Toaian Republic, while still not being truly democratic and retaining much of the power in the hands of few, instituted various government apparatuses that gave the citizens more democratic power. In the end, the Lautan Kingdom signed a treaty with the Toaian Republic, only letting them retain power over the small Raman Peninsula and a few minor islands. During the rule of Toai, the vast majority of towns and roads existing today in Sae were created, and the city of Keidu, which had been founded around 20 BC, started to gain more importance. Various government institutions were moved there, and it became the largest city on the island.

In 1299 Sae became a tributary to the Kingdom of Majesia, which also conquered the rest of the island. During this period, which was later called the Majesian period, Sae was part of the Province of Kraja, but retained a rather high level of sovereignty. It was highly influenced by Majesian culture, and many buildings built in those years can be seen to this day. The rule lasted until 1395, after the Empire had reached its greatest extent.

In 1439, as a result of the geopolitical changes in the country, the official name was for the first time changed into Republic of Sae (which is why it is today known as the First Saeian Republic, or just as the First Republic).

In 1560, there was a civil war between the Rama-Ave Ya alliance and the republic. Rama became the centre of a de facto kingdom ruled by President Mneu Lauti Sor, who actually served his role until his death, and passed the throne to his son Mneucem Lauti Sor. The war, which lasted from 1560 to 1620, was the longest in Sae's history, and is to this day remembered for having killed more than 9% of the total population, according to some estimates. In the end, the war was won by the Saeian Republic, and the King was executed, as well as most members of his family. Some of them managed to flee to other countries, and their descendants' traces have been lost. A great crisis happened in 1628, causing a few independence movements to arise, most prominently in Khet Ikh, a small southern region.

Backed by the Khet Ikh nationalists, a new monarchic sentiment arose, causing many to support the election of Nebme Sor Akhtok, a monarchist, as governor (the highest political office). Slowly, his position became more and more similar to that of a king, and in fact, his son became prince as soon as he was born. In 1683, the kingdom of Akhtok was founded. Its society became very feudalistic, and slavery, almost non-existant during the Republic, grew quickly. Khet Ikh was given a certain amount of independence, and was treated as a Special King's Territory.

In 1735, king Gaue Kuan Ton began a campaign of oppression against the Bouolog people, who wouldn't integrate with the monarchic state. They were employed in copper mines and their population was decimated. During the 18th and 19th century, the kingdom increased trade with other countries, especially in Uletha. Natural resources such as minerals were exploited and free market started to take place, substituting feudalism in some cases.

Despite technology not being advanced for the time, the first newspaper was issued in Sae in 1831. Sae had a communist revolution in 1941.

Sae is a republic. It has been governed by the Communist Party of Sae since its independence.

The Saeian economy is largely based on agriculture and manufacturing. In recent years, there has also been a rise in tourism. Private enterprises are virtually non-existant in Sae, except for small companies like restaurants and other small-scale shops, as the economy is mostly publicly owned.

Much of the Saeian agricultural economy is based on the production of rice.

Most Saeians are of Mya Kem ethnicity, but about 24% of the population is comprised of first, second or third generation immigrants. More than 6% of the citizens belong to other indigenous ethnic groups.

Many religions are found natively in Sae, and a few have been introduced by immigrants in recent times. Most of the population (about 52%), however, doesn't declare a faith and just follows traditional spiritual practices as part of their culture.