The "Asunatotsu" bridge connecting the airport island with the mainland

The airport opened in 2014 on a 9 sq km artificial island offshore Kubori island to relieve the congestion of the former Sainðaul Tswankanami Airport, now reduced in size and used as a military base, and the Sainðaul Kanui Airport, located in the continental area of the city, now serving mainly domestic and short haul destinations.

The genesis of this airport backs to year 1998, when the former international airport of Izaland, Sainðaul Tswankanami Airport started to show signs of saturation. Different projects were made about the location for a new international airport, including the expansion of the main domestic terminal of Kanui Airport. However, the promising growth of international flights pushed for a wider projects, so the idea of creating a wide airport on an international island took over.

At first, there were different ideas for the location of the new airport, including near Kawayatsu or Sabullan. However, the Ministry of Infrastructure, asked, in 2001, to locate the new airport possibly along the route of the newly to be built high speed railway (the Sainðaul - Warohan Saikai Line), so an area in Komokata Prefecture, about 2,4 km offshore between Riimibaiken and Chikawari was chosen, due to the low depth of the sea (not more than 35 m in the deepest area). Particular attention was made to avoid endangering the reef located in the area.

The preliminary project was ready by september 2005, and the complete financing of the airport, including the undersea high speed railway, was done by spring 2007. Building works started finally in 2008, first by landfilling the area to create the island. At the same time, tunnel boring machines started digging the two single tracked 18,7 km tunnels from Komokata to Chikawari area, and the HSR station was nearly completed by 2012. The last two years were taken to complete the construction of the airport terminal itself.

In 2017, due to the increasing low cost flights, especially by the growing IzaFly low cost carrier, a new terminal was built on the southern area of Asunahama island. The terminal behaves actually as a satellite building, as everyone needs to pass through the check in and immigrations of the main building. The transfer to the low cost terminal is guaranteed by a inter-terminal people mover. 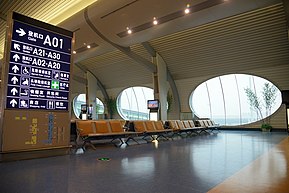 View of the inside of the airport

Since the landfilling of the airport island has been one of the biggest project in Izaland, at an estimated cost of about 18 billion USD, a symbolic name was chosen fo the island, calling it Asunahama (空島, asunahama), meaning "sky island". This name was also chosen to call the airport itself.

Sainðaul Asunahama International Airport, as the name suggests, is mainly intended for international flights use. Due to the limited extension of Izaland, domestic travel is mainly satisfied by high speed rail (whose trains also stop in the underground passing station), allowing code-shared trains to reach the center of Sainðaul and all the major cities in Kubori island.

Domestic transit with the SATMEX

To transit to the farthest national destinations, or those located on islands, usually passenger need to move to Sainðaul Kanui Airport, located south-east the continental side of the city. To allow this transit they can use for free (as its price is included in the air ticket fare) the SATMEX shuttle, a train running on the high-speed line skipping all the stations in the middle, even Sainðaul central station, that reaches Kanui Airport in 35 minutes. Passenger's baggage is also transferred by the airport into the train's baggage wagon, so they do not need to worry about anything. However, immigration process (when entering Izaland or exiting Izaland) must be completed at Sainðaul Asunahama International Airport. The minimum connecting time using SATMEX is 120 minutes.

Sainðaul Asunahama International Airport is the main hub in Izaland for Izaland Airlines (IZ) and Uletha Eastern Airways (UE), offering a good hub and spoke solution for international aviation. The airport is also hub for the low cost carrier IzaFly, flying from the Low Cost terminal, opened in 2017 on the southern area of the airport. 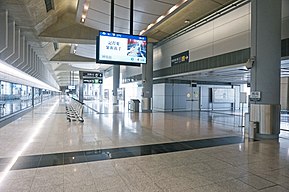 Inside the airport transit station

The airport boasts a transit center offering interchange between 2 subway lines, 5 railway services (including the Airport Express and the high speed railway. The hub station of Sainðaul Asunahama International Airport is located underground, between the parking area and the airport main terminal itself. Access to the arrival lobby is guaranteed by a gentle slope with mobile walkways, while the access to the 4th floor departure lobby is helped by escalators and direct lifts.

In 2018 opened a 35 minutes train service, the non-stop SATMEX (Sainðaul Airports Transit MegaExpress), allowing hassle-less transit between intercontinental and domestic flights at Kanui Airport (the train takes to Osenude station, from which mobile walkways lead to the terminal).