The geography of Sonela Gohi is dominated by the immense Gani Di-Tso mountain range and the uplifted Ulis Dav plateau. To the north, the province of an arctic tundra extends from the northern extent of Gani Di-Tso to the coast of the ice-filled Awisuitok Sea to the north. The fertile piedmont region south of Gani Di-Tso comprises the Tuyasdi Uweyv province which extends to the border with [[]].

Sonela Gohi is divided into 3 provinces.

Agriculture is concentrated mostly in the fertile northern region of Tuyasdi Uweuv, which receives high rates of precipitation due to the weather effects of the Gani Di-Tso mountains. This is followed by the plains of Ulis Dav which receive water from glacial melt and artificial irrigation.

Mining is the second largest industry, due to oil and petroleum sourced largely from Iqual Ukang Iqtuk and the numerous heavy metal deposits in the northern range of the Gani Di-Tso mountains. 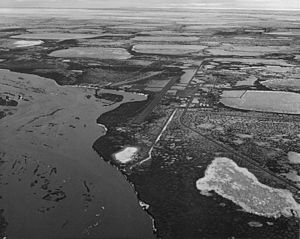