The South Astrasian Federation (in Florescentian: Astrásia do Sul), is a federal constitutional monarchy located on the sub-continent of Astrasia. The federation consists of twelve provinces and a national district, and has a total landmass of 26,396 sq km that lies on the Cape Pascoa Peninsula. Neighbouring states include AR056a,Karvaland, and Kovatany.

The federation was formed by the elements loyal to the overthrown Florescentian monarchy in the wake of the 1874 revolution. The government is a parliamentary system and the legal system is based on the ancient Nortian Code (Lex Nortia). The head of state is a constitutional monarch, presently Luís V, a descendant of Dom Adolfo II, the last monarch of Florescenta. The head of government is the prime minister (Primeiro-ministro da Astrásia do Sul). The federation is an active member of the Assembly of Nations.

The first human inhabitants to what is now South Astrasia are thought to arrived sometime after the end of the last age, c. 11,700 years ago. The retreat of glaciers across the subcontinent uncovered valleys they had carved into the land. The newly formed valleys formed a biosphere rich in flora and fauna, and provided an ideal environment for early humans to settle. Outside the river valleys, migration routes along the coast allowed humans to move further south. These river valleys were rich in game, and successive waves of migrants would settle these valleys as part of a wider migration into what is now Karvaland, Xsegunis, and Neo Delta. Further inland, the resource poor highlands of the South West Astrasian Range provided few benefits to early humans, and remained virtually uninhabited until modern times.

Little is known of the first settlers to the valleys, but they had been replaced by the Acre culture by the start of the Neolithic c. 9,000 years ago. In addition to the adoption of agriculture, the Acre culture is known for its construction of megaliths, typically in the form of henges and dolmens. Examples of these structures can be found throughout the valleys, but are more common on the shores of the Costa de Lagos. Like their predecessors, little else is known of the Acre culture except for their distinct flintstone arrows, the first examples of which were found in marshes near the city of Acre in 1954.

By the beginning of the Archantan Bronze Age c. 4,000 years ago, the Acre culture had given way to the more sophisticated Eldorado culture. Consisting of several phases, the Eldorado culture features typical Bronze Age burial practices such as cremation and food vessel burials. The remains on the dead were placed in round barrows, and often featured rich grave goods. The usage of gold and silver became common for the first time during this period. In addition, the first written languages began to develop, with the emergence of Eldorado syllabic script.

The Eldorado culture was supplanted c. 2,750 years ago with the arrival of the Ilkova people, the descendants of whom still inhabit the small mountain kingdom of Kovatany on the Federation’s southern border. The dominance of the Ilkova proved to be short-lived, with the arrival of the Iron Age and the subsequent expansion of the Xsegunian people from the south. The Xsegunians established a number of petty kingdoms across much the southern part of Astrasia between c. 2,500 – 1,500 years ago. The Ilkova were driven into the hills and mountain areas of the subcontinent where they remain today. Apart from the arrival of the ancestors of the modern Deltese people, the cultural makeup of the valleys and surrounding areas remaining relatively stable until the arrival of the Florescentians in the XVII century.

In 1606, the Florescentian adventurer and explorer João Fernando de Hermes landed at the mouth of the Rio Carraca near the modern city of Porto Uai. Da Hermes secured a concession from the local Xsegunian magnate, leading to the first Florescentian settlement in Astrasia, the Feitoria da Santa Cruz. At the beginning of the XVII century, Florescenta was still a vassal of Schwaldia, a situation that had persisted for over 1,000 years. One of the shortcomings of this arrangement was a decree of the Schwadian crown that forbade Florescenta from pursuing an overseas empire. The circumvent this order, the Florescentians formed a chartered company, the Companhia de Astrasia Florescentiana, just prior to Da Hermes departure from Porto Real in April 1605. The company not only allowed the Florescentians to flout the anti-colonisation law, but also in time made the country, and the royal family in particular, extremely wealthy.

From this starting point, the Florescentians were able to gain dominance of the valleys within a generation. The cause of the rapid change in the balance of power rests partly on the spread of new diseases hitherto unseen on the subcontinent, partly on the superiority of Florescentian military power, but also significant was the waning of Xsegunian power and influence generally. The Ingerish conquest the central provinces of Xsegunis in the 1620s to form Karvaland severely weakened the Xsegunian state, and cut off the Xsegunian inhabitants in the valleys from their homeland. Over the next century those Xsegunians that were not assimilated into Florescentian culture opted to migrate away from their ancestral lands and settle in areas still under the control of the kings of Xsegunis.

By the mid-XXVII century, the colony was thriving. Approximatly 1 million Florescentians now lived in the colony, chiefly in several of the more prosperous feitorias that had grown in to fully-fledged cities. The largest of these were Porto Uai and Cataratas do Ouro. The Florescentians were divided in to two classes, the Florescentian-born cavalheiros who dominated the upper echelons of the company and the church; and the native-born crioulos, who were also chiefly of Florescentian decent, but also counted amongst their number those with up to 1/8 (one great-grandparent or equivalent) Xsegunian or Ilkova ancestry. Whilst the crioulos were considered full subjects, they were regularly denied the opportunities that were afforded the cavalheiros. Company rule also favoured exporting the wealth of the colony back to Florescenta rather than reinvesting it locally. Much of the local infrastructure was described by contemporariness as being rudimentary, with roads that were little better than tracks across most of the colony. Despite the best efforts of the church, schools and hospitals were basic and utterly incapable of meeting the demands placed upon them.

Discontent with the ongoing discrimination of the crioulos and their poor quality of life finally boiled over in 1763. When the board of governors declared that the crioulos must pay a slew of increased taxes, they refused and instead took up arms against the cavalheiros. In addition to their grievances, the crioulos were almost certainly inspired by the nascent independence movements that were beginning to threaten the global colonial powers of the time. The crioulos swiftly took control of the highlands, and ejected the cavalheiros to the coastal settlements where they were able to resist further attempts to defeat them. Reinforcements from Florescenta were sent for, and were able to push the crioulos back to the Passagem dos Caçadores, where the advance was halted. A further year of fighting proved incapable of achieving a decisive result for either side, and led to the opening of negotiations in the winter of 1764. In early 1765, the two sides reached an agreement, known as the Assentamento Astrasiano - the Astrasian Settlement.

Under the terms of the Astrasian Settlement, the Companhia de Astrasia Florescentiana was dissolved, and control of the colony was turned over to civil administration, with crioulos guaranteed key posts in the administration. Rather than the personal possession of the reigning monarch and other shareholders, Astrasia Florescentiana became a colony, with a Governor-General and it's own elected Cortes. The new arrangements proved successful in keeping the peace for the next century, with the distinction between the cavalheiros and crioulos abolished by law under the terms of the settlement. Within a generation, the distinction had been successfully abolished in practice, as the crioulos assumed full control of the colony. The secondary effect of the revolt was on Florescenta herself, where the absolute rule of the king gave way to limited form of constitutional monarchy. However, these reforms at home were highly limited and laid the foundations from the overthrow of the monarchy in the XIX century.

Besides the Distrito Nacional, the South Astrasian Federation is is divided in to six provinces, as outlined below: 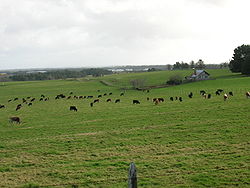 The agricultural sector is focused on livestock, forestry, aquaculture, and fishing activities, in which the processing of primary produce is fully integrated.

There is a significant emphasis on cattle, which most ranchos specialising in dairying. The fishing industry is more diverse and focuses on a variety of specialities including seafood, alguiculture (seaweed), miticulture (mussels), and salmon farms. The fishing is supported by a maritime industry of numerous shipyards and shipping companies both on the coast and along the lakes. Smaller agricultural industries include the farming of cereal crops and timber logging.

Tourism, which is characterised by having a varied range of natural and man-made attractions, constitutes an important economic activity in all provinces.