The Taukan cradle is thought to be located in what is now northern Sabishii in Paxtar. Archaeological remains of a neolithic culture unearthed near the bank of the XXX river are the oldest remains of human presence to be found in the region. This population expanded south towards the coast and left artefacts, mainly pottery and post-holes where settlements had been located. This area is considered to be the original homeland of the Taukan culture. In a series of migrations they spread west along the coast, reaching modern-day Guai during second millennium BCE. In a later migration a group moved east across the central Antarephian mountain range to the Asperic coast, reaching Ullanyé around 500 BCE. They spread throughout central Antarephia, merging with preexisting cultures they encountered.

Taukan tribes that have been established on Gonfragerran coast, started to move westward, reaching Guai between 2,000BC and 1,000BC. Some of these tribes' name are known as they kept written archives of some of their activities (namely, trades and political decisions). Their Abugida writing system has been in use until the late 17th when Romantian alphabet superseded it completely. By 500BC, the indigenous Kaitese people had completely fused with the Taukan tribes, leaving some oronyms and hydronyms still existent, and agricultural techniques previously unknown to the Taukans. Taukans organised themselves in a set of city-states usually ruled by a council of the elders. These city-states are usually divided into those based agriculture and/or mining, and those dedicated to trade by sea or land routes. This period, lasting from 500BC to 200 AD, is known as the Silver Age.

The Eight Virtues are traditionally listed as: Courage, Rectitude, Benevolence, Loyalty, Diligence, Humility, Temperance and Respect. Originally, they were expected from those who ran the city or state, but over the time, they have been taught as basic virtues of any person of integrity and honour.

Below is listed a small sampling of types and examples of verbal lore:

Aspra mythological shield that threw projectiles back at the attacker. The story seems to originate from the Kaitese People Mythology as this concept is not found in contemporary Taukan culture. Long forgotten, its popularity rose at the time the Taukans came in contact with Ulethan colonists and its fame spread across the Taukan culture sphere. Aspra can be manned only by those demonstrating the Eight Virtues

Kidjo & Cilia (usually transcribed as Keejoe & Sheilia in Ingerish) are a pair of swans living on a pond, filled with water so pure it gives immortality to the purest souls who drink it, yet it induces envy and frustration to the others. The pair, of an undefined colour, can speak and is endowed with immortality, implying their souls are the purest.
The pair is approached by a human couple that lives nearby. Unaware that human souls can never be completely pure, Kidjo and Cilia offer them water and other gifts, and start teaching them how to speak. Days after days, the swans become more and more colourless (whiter and whiter in some versions) as the humans become more envious of the swans' gift (which is the ability to speak), and display eagerness to learn more and more.
Meanwhile Kidjo and Cilia lose their own ability to speak to the point that even their own names become those of the two humans, unnamed until then. Furious at mankind, the swans retreat and, from then on valiantly defend their cygnets against any human intruder as they do not trust them anymore.

By the end of the story, Humans know how to speak but are envious, easily frustrated and usually do not know what to do with this ability apart from being slanderous.

In Guaiian, moho kidjo or swan tear means to mourn for something dear one has lost without having fought for. Moho Kidjo is also a highly alcoholic spirit produced in the Táriao Upland (southern Guai). Moho Kidjo is transparent with a light blue hue, and its sale and consumption were severely restricted during most of the 19th and 20th centuries.

Kidjo (/'kidʒɔ/) is cognate with Guaiian kidj (/'kidʒ/ - seven) and Olonyé kidynó (/'kidʒo:/). The root /k/+/dʒ/ conveys some meaning of speaking or causing someone to speak. In old epic poems, phrases such as "open my lips" are frequently affixed to Kidjo or kidj (number seven).
The swan is the national bird of Guai where it is admired for its natural grace and its fierceness to defend its kind. 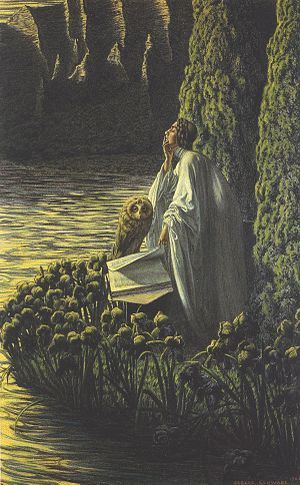 A spirit whose name is roughly translated as "the one who does not look exactly similar" and features in several Taukan mythologies. Kirakó often acts as a guide, adviser or judge and many of the tales revolve around the spirits obscure oracular pronouncements. It is associated with nocturnal animals, especially owls, and often frequents pools, hillsides and high places. It has many physical forms and is rarely described in the same way twice. A central motif of the Kirakó stories is that human protagonists are unable to recount in any great detail what the spirit looked like.

In Guaiian versions of the lore, Kirakó (/kiɾa'kɔ/) is most exclusively associated with owls, especially the white-faced barn owl, living by a pool or the entrance to a subterranean spring, whom the hero or heroin is due to come visit at night or happens to encounter. In these encounters, Kirakó, sometimes acting as a guide, always tells the very truth. The rub lies in Kirakó's rather oracular parlance that is usually misguiding. The hero runs from mishaps to tragedies and sometimes dies by the end of the story. The moral of the story is usually understood as beware of well-intentioned beings or beware of the interpretation one gives to others' words.

The meaning of the -ko ending has been lost. On the other hand, ki stem usually conveys the idea of to see, to look or to resemble, and -ra is a negative suffix. Given its behaviour in the Guaiian versions and in addition to "the one who does not look exactly similar", Kirakó is also understood as "the one who does not see the same things/same way", implying the bird is blind, clairvoyant or see the same things but in a different way. The quirk of this story was extremely popular during the 19th century, at the height of the Romantic era, to the point that women started wearing jewellery pieces that depicted Kirakó, usually with gems such as moonstones set in silver.

Mona is the story of a kind-hearted mother Raven. In Guaiian, the raven's name is spelt Mw̄na (/'mo:na/). Both Mw̄na and Erói(/e'ɾɔj/), Guaiian for raven, have remained popular female and male first names.

Literally, 'stars in his back' is a mythical being from early Ullanyé religious tradition understood to act as a mediator between the conscious and unconscious mind or dream-state. He is one of the Fading Band who are believed to influence the course of a person's life. Tasóndy usually appears as a marine mammal in the myths, occasionally as a dolphin but more often as a one of the larger whale species. He is strongly associated with the sea, sailing and fishermen. The Sindyé Tasóndy is named after him.

Taukiri, also known as the Weeping or the Mourning Maiden, is popular tale originating on the coastal regions along The Koropiko bay. From place to place the plot varies but the popularity of the tale has inspired poets', novelists' and composers' works along the centuries.

Taukan languages have a number of shared features across all languages:

Dyadyé languages is a subgroup of the Taukan languages which includes Olonyé, spoken by around 6 million native speakers in Ullanne.

The definite article is not in use in the languages belonging to the Gonfragerran subgroup but suffixes are used to indicate plural notion. As in other Taukan subgroups, verbal inflection is limited. Tense is usually conveyed by a limited set of uninflectable suffixes, whereas mood is expressed by apocopated modal verbs prefixed to the verbal stem.

Kaitese dialects in Guai circa 1600

Kaitese dialects in Guai circa 1900

All Kaitese languages make an extensive use of auxiliary verbs to convey both tenses and modality. The vocabulary contains a lots of pre-Taukan elements, mainly concerning agriculture and some natural features. The main differences between Continental and Peninsular Kaitese are:

Peninsular Kaitese are furthermore divided between western and eastern dialects. Apart from minor vocabulary and grammatical differences, the grouping concerns phonology differences such as the lenition of western [ks] sound into eastern [s] or [z] sounds. For example, standard Guaiian eks (six) is esè in Taupan and Kinaran. Paxtar is Pasdār (/pas'dɑ:ɹ/) in Guaiian because the relation with this country was carried on by the eastern Guaiian Thalassocracies.