Hi! Welcome back to my weekly bliki, episode 33! I'm honestly impressed with myself for how long I've been doing this now. 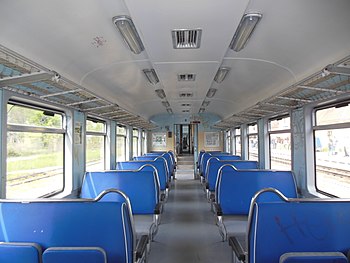 My fave suburban trains going out of service :(

It is a sad day today, or technically, this Sunday. With the new railway timetable, my favorite trains, class 451, are going out of service after 53 years.

These electric passenger trains were made between 1964 and 1968; and later with some minor changes between 1972 - 1973. A total of 62 sets were made. When they were first introduced, it was a small revolution. The trains had wide doors, comfortable seats and many technical innovations I can't name because I'm here mostly for the design, not the engineering. They were originally set to last 15 years, but most of them did twice or thrice as long; most of them operated on commuter rails around Prague.

Fun fact - they had the wide doors and easily demountable interior furnishing so they could transport army material and soldiers in case of a war conflict. That was a darker side of the time they were made in. Either way they're a great example of the 'Brussels style,' a modernist art movement in the communist Czechoslovakia following the country's success at the Expo '58 in Brussels, Belgium and reflective of the liberalization of the Czechoslovakian politics and society at that time.

They were simple, sturdy and reliable in operation. They were nicknamed frogmouths because of the shape of their profile. I certainly can't speak for everyone, and especially pre-2000, but along with the Tatra T3 trams, they were a symbol of Prague to me. Imagine Prague in the 2000s: post-communist, adapting to capitalism, dirty, full of trash, dust and graffiti, rapidly growing and modernizing - these trains were everywhere and they fit that spirit perfectly. They were trashy, dirty, raw - and so was everything else. And such was their demise too - they idled in a rail yard in the suburbs for some time, robbed and vandalized, and then they were scrapped.

The last two of these trains are going out of service this Sunday. One train set was restored to the original look from 1964 and is now in the Czech Railway Museum.

I have a hard time letting things go (not to be confused with people), but I know I'll have to move on - they had to go out of service someday. I took one last ride but I'm missing them already.

What this means for Drabantia

With the terminus of the railway I've been drawing for two months quickly approaching, I'm starting to think more about the service on the railway, the vehicles and buildings. I figured class 451 would be great for passenger transport on the railway, especially in the suburban areas of Odrava and Kolín. I have yet to come up with a coherent back story though, so stay tuned.

Bet you didn't see this one coming! 143 km in Chvalkov, Janov Region. I have some 15 kilometers to go, which I'm going to finish by and describe next week.

I titled this bliki entry before I wrote it - as I do - and it turned out to be about something completely different than I wanted it to be. I just started to imagine the area I'm drawing in winter, peaceful and covered by snow, that's all. Is it snow where you live yet?

I'm also sorry this bliki was more about trains than actual mapping. Next week I'm wrapping up the railway, so get excited!

are you into modernism at all

Actually Silesian Railways will return their EN57's lended from PolRegio when the new Pesa Elf II trains arrive (with a delay of course, Pesa is always delayed ;) ). The old EN57 will, of course still propably be found in some voivodships of Poland, and I give them at least 20 years before they disappear in their unrefurbished form, but railways in Poland are overall in a much worse state than in Czechia (and you can see that if you compare Český Těšín and Cieszyn stations to each other). It is also the end of an era, because AFAIK those trains were running in the area since the beginning of their exploatation. --Trabantemnaksiezyc (talk) 19:46, 4 December 2017 (CET)

Oh yeah, I've spent a lot of time browsing bazakolejowa.pl and other websites to know the situation (especially local) railways in Poland are is... bleak. I've been to Cieszyn and the town is nice - and I went to Biedronka (shopping at foreign supermarkets is one of my favorite adrenaline sports), so that was cool - but the railway station (which I think has been demolished since) was not so impressive. --Eklas (talk) 14:57, 5 December 2017 (CET)

I think that I've got to dissapoint you, Biedronka is owned by the Spanish (and only the brand is Polish). If you are looking for the true Polish retail experience (lol) then try Społem! These are smaller shops (except for the big "Skarbek" department store in Katowice, on the Market Square) but they are an interesting relic of communism. Or Piotr i Paweł, since it's one of the bigger networks. --Trabantemnaksiezyc (talk) 19:49, 5 December 2017 (CET)

Communist design in the 1950-1960s was often actually very striking and futuristic. There is a type of electric locomotive I saw in Slovenia that has 'ski goggles' which is a really distinctive appearance. So I hope these trains are replaced by something with a bit of distinctive character and not boxy generic trains that have been sold to several other countries already.

It would be possible, of course, for a branch line to operate one or two of Drabantia's old trains as 'heritage' stock. This was the situation until May this year on the Aylesbury-Princes Risborough line where a pair of class 121 'bubble cars' railcars from the 1960s were used in irregular service (they became unreliable so have been sold to heritage railways). https://commons.wikimedia.org/wiki/Category:British_Rail_Class_121#/media/File:121_034_(Bubble_Car)_at_Aylesbury_Station_-_panoramio.jpg. Sometimes the reason for removing old trains is not age or unreliability but new regulations about disabled access or fire safety. Sarepava (talk) 21:48, 4 December 2017 (CET)

I love architecture and design of the 1960s. Class 451 was replaced by class 471, which isn't the worst either. I obviously know these trains would be obsolete in Drabantia as well, even though they actually are wheelchair-accessible and they're relatively comfortable, I meant more like they would be big in the 1990s. The bubble cars are nice. --Eklas (talk) 14:57, 5 December 2017 (CET)

I have to say that even I feel that there's some sort of odd charm to those old trains. The interior is very mid-century utilitarian and looks pretty cold and clinical, but I love mid-century stuff so I'll give it a pass. I do like the ends of the train, though - there's something about the headlight design that reminds me of headlights and taillights from big 1950s American cars, which as everyone knows, I'm obsessed with. One point to the Communists for good design. As for snow, HA! The temperature's in the mid-20s, the humidity's going up, and it's getting too hot and sticky to do much else. White Christmas in New Zealand? Ah, if only. ParAvion (talk) 23:17, 4 December 2017 (CET)

I don't know much about American cars from the 1950s, but it's possible if not likely the designers took some inspiration. Post-war Czechoslovakia was too busy with restoring the basic stuff, like having enough food and houses so people could live, establishing communism and killing the political opposition, so there wasn't much room for art. In the 1960s, when the situation got better, Czechoslovakian artists obviously tried to catch up with the rest of the world. --Eklas (talk) 14:57, 5 December 2017 (CET)

Those trains are beautiful! I was very sad when they took my favourite tube trains out of service a few years ago (A Stock). Progress marches onward. It hasn't snowed here in Oxford yet but I hope it will before I go home as it's a very beautiful city in the snow. Myrcia (talk)

Oh yeah, the A Stock looks nice. The old Prague subway trains were all imported from the USSR, some of them still operate in the Eastern Europe. --Eklas (talk) 14:57, 5 December 2017 (CET)

Ah, your post reminded me of the old MS61 from the A line of Paris. Nostalgia from my studying times and my first years of work when I took them every day… Tparigo (talk)

I also have a certain bias to trains, especially in Singapore's MRT system, on which is the best.

A quite common train which is actually my least favourite. I am not sure why but I think it is because it is too common that I got sick of taking the train.

I like this train. It is quite new in the MRT system. 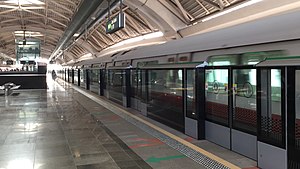 The 2nd oldest train which is also my favourite

However, I still prefer rectangular trains like the ones in Japan or South Korea's metro systems. In my country's Singkangia's SKUD (SingKangian UnDerground) system I am planning to adopt the two types, one each for a train company running the system.

There is absolutely no snow in Singapore (it is a tropical country just 1 degree N of equator), sadly, and I am not going anywhere cooler in these holidays. So enjoying the humidity and rain i Singapore as much as I can. haha.--Happy mapping and God bless, Zhenkang (talk) 10:10, 5 December 2017 (CET)

For me it is sad to see old designs be retired as well on our railways. Up north we still have the old Pacers now and again on routes out of Bradford, however, our company Northern are phasing them out in the upcoming years, which is a shame! I prefer a Pacer to the Sprinter because the Sprinter for me seems like it came from the era that rail passengers started to be treated like commodity and not humans, the size of legroom between the seats is TINY for a lanky person like me, whilst the Pacer was spacier. I really wish that the railways will go back to giving people more legroom, but I doubt it would happen. In other news, whilst the rest of Yorkshire had snow recently, Bradford was like...the center of the storm in that we didn't have a single snowflake, it admittedly avoided us. Just hoping for snow sooner or later now! --Aces California (talk) 00:06, 6 December 2017 (CET)