Hi! Welcome to part two of my railway tutorial series. Last week there was a lot of theory, railway history etc., today I'm going to be focusing on the actual drawing. The topic of this chapter is junctions and landscape.

What to know about curves, tunnels and such 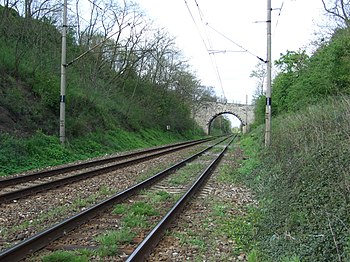 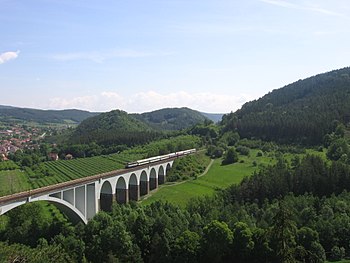 A railway bridge in a difficult terrain 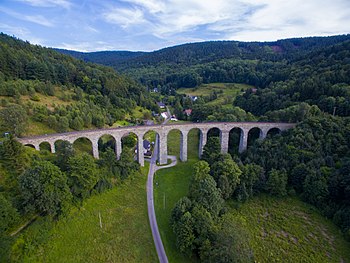 Another railway bridge in a difficult terrain

Is anyone familiar with the Microsoft Train Simulator or any similar game? You may have noticed that when you start creating a new map, the terrain is completely flat by default. You can raise a mountain that's 5,000 meters high out of nowhere and you're able to build a train track climbing up the nearly vertical slope. However, the OGF world is earth-like and physics do apply here. So if you're used to railways from simulators like Cities: Skylines, prepare to forget everything you know about them.

Useful tip number one: Railroads stay at the same elevation whenever possible. Trains are the most efficient of perfectly flat tracks, climbing up a hill requires extra fuel. And so instead of going over a peak, the tracks pass it by using a curve. Sometimes it's enough to build a cutting or an embankment - so the tracks can continue straight forward, in curves the maximum speed is lower. It is all about balance. Sometimes, especially in densely populated areas, railway lines have to avoid settlements and other man-made obstacles as well.

Useful tip number two: when there is a difference in elevation between the start and end station, the tracks use a gradient. In other words, they tracks are flat at first, then the slope inclination starts gradually increasing. Just like with curves, there are no sharp edges.

The slope gradient is written in per mil (1/1000; ‰ sign), where 1‰ means the track elevation will change by one meter in a thousand meters. Modern lines seldom use gradients steeper than 20‰, the steepest you can get without a special cog-wheel equipment is some 50‰, but that's already on the brink of practicality.

Curves have an important parameter and that is the radius. It's exactly what it sounds like: if the curve was a full circle, the radius would be its radius, heh. However, because of inertia, the arcs have to be a reasonable size, so the trains can drive fast enough through them. It's a lot of physics, so I've put together this simple table:

If anyone cares to know, these values are for cant 150 mm and gauge 1435 mm, the standard in Central Europe.

The track speed however also depends on the condition of the tracks and the slope inclination. The curves should always be as large as the terrain allows or as the fastest trains can go - it doesn't make sense for a branch line used for transporting coal to have arcs spanning kilometers in width. Tag your tracks with maxspeed=value in kmh to denote the maximum speed allowed.

Another thing affecting the speed is the gauge. That's the distance between the two rails on a track. Smaller gauges allow curves with small radii and are cheaper to build, however the trains can't go very fast in order to prevent derailment, and so narrow gauge railways are mostly restricted to industrial spurs or mountainous areas. The (literal) standard gauge is 1435 mm but a variety of others exist as well. Tag your tracks with gauge=value in millimeters.

The last option are bridges and tunnels. Draw them sparsely, and only when really necessary, like in cities or difficult terrain (e.g. mountains), because they cost a lot to build. Bridges over bodies of water are usually straight and perpendicular to the flow, in order to save money and engineering work.

Now that you've learned all the theory, it's time to get to the practical part: How to actually draw railways?

Tips and tricks for drawing railways

Disclaimer: I use JOSM. I used to work with iD back when I was an active OSM contributor, but I strongly feel like JOSM is the best editor for OGF. Once you get used to it, you'll find out how fast and powerful it is - it has all these special tools, niche add-ons and customization options none of the other editors have. It also allows for more precise mapping, which comes in very handy when you're drawing railways.

Here's how to draw a nice, even arc using JOSM in five steps:

Tag appropriately as described last time. You can also follow the curve by another curve going in the same or opposite direction, depending on the terrain.

Railway curves aren't actually perfectly circular. Each curve has a transition (easement) section, which is a parabola connecting the circular part to a straight track. As the name suggests, this prevents unnecessary wear on the wheels and increases the comfort for passengers, who don't get thrown off their seats by inertia every time the train turns. Drawing that by hand can be difficult, JOSM has the Splinex plugin which can be used to draw spline curves that could help. However, these segments aren't very long, railway curves are close to being circular as a whole and drawing parabolas is difficult (even though I'm almost positive JOSM has a plugin for it), so this is really an extra option for railway gourmets and radical realists. The rest of us can peacefully sleep at night knowing our tracks are a simple circle.

Curves should be drawn smooth enough. It really depends on the size of the curve and on how detailed the area around is, but in general I would say 1 node/50 meters of length is the bare minimum unless you're only sketching. You can add new nodes to an existing curve and then make it circular by pressing the O key.

Last but not least, mind the radius as explained in the previous paragraph.

As mentioned above, JOSM has a useful parallel line tool. You can create a parallel line or object by selecting one with the tool (activated by Shift+P) and click-dragging your mouse to the desired position. The space between tracks differs depending on the terrain, but since the parallel tool only allows whole numbers and their +0.5, I use 4.5 meters as the distance between two tracks everywhere. It also depends on the gauge you're using, narrower tracks allow for smaller distances between them. A junction is a place where two or more railway lines meet - the equivalent for roads is an intersection.

Each junction consists of multiple switches. Switches allow the change between different tracks. Over the years, several distinct switch types have developed that are predominantly used - yes, there are other types as well, but they're really minor. The ones in the illustration on the left account for 99% of the world's switches.

Hey also, the three-way switch is used REALLY sparsely especially in industrial works, because it's prone to incidents and has high maintenance demands. Typically, tracks split in two.

Other things to watch out for

This week it's fairly simple:

I will admit that I haven't done much over the course of the past week, but that's just me being lazy. However this week I'm going to continue working on this area and I'll post updates to the OGF:Making realistic railways/March 2018 Challenge‎‎ page.

Anyways, that wraps up my today's post. I hope you liked it, I hope you learned something, and I can't wait to see you share your progress below in the comment section or at OGF:Making realistic railways/March 2018 Challenge‎‎. I'll try to respond in a helpful, constructive manner. See you next week!

Comments and questions are v welcome

Thank you for your detailled work. The table with the radius and the maximal speed, are this the chech limits? I learn, the "absoulte minimum" is 190 m (in Germany). But clear is, that you say it - smooth the curve. For the rails between Hamburg and Hannover 1847 at no place the radius is lesser as 700 m. Fine, that you say something about the klothoide at the beginning and end of a curve. To draw this from free hand, you need a good eye-mesure.--Histor (talk) 23:27, 12 March 2018 (CET)

Thank you, Histor! Yes, the values I found at Czech websites, according to the Czech law curves must have over 150 meters in diameter and for newly-built railways it's 300 meters. As for the easement stretches, I think the Splinex plugin Zhenkang recommended below could help a lot - I'll make sure to test it later. --Eklas (talk) 07:07, 13 March 2018 (CET)

There is this splinex plugin in JOSM which is pretty helpful, if you know how to use it. I will start drawing natural features and join up the junctions.--Happy mapping and may God bless you, ZK (talk)

Oh wow, sorry, I even have it installed but I completely forgot about it; I suppose it is more useful than drawing the curves manually. I will try the plugin and add it into the text. --Eklas (talk) 07:07, 13 March 2018 (CET)

Okay, in my opinion the spline plugin isn't bad, but drawing railways as simple circles is easily the better option, as it can be hard to get the size right with the plugin. --Eklas (talk) 16:50, 13 March 2018 (CET)

To add on to my comment on the content in the bliki, I would also like to say that when building railways, the cost is also important. It is quite costly to build long tunnels and long bridges, and also there should not to too many detours around hills or lakes. This is also the same as motorways, but railways are more useful than motorways. (no biases here- but I also like railways)--Happy mapping and may God bless you, ZK (talk) 12:36, 13 March 2018 (CET)

I always draw curves manually. I try to be consistent, so segments of them are all 20m long and differing from the previous segment by 2 degrees. I know that not all curves are the same but whatever, it fits my mapping, it's rather tidy and I don't have to bother with this circles stuff :) . --Trabantemnaksiezyc (talk) 20:33, 13 March 2018 (CET)

Sorry for the late reply, didn't see you in Recent changes. Your method is also an option, to me drawing three nodes and pressing a button seems easier tbh, but if you have the nerve and patience to do this (I wouldn't), then why not I guess. --Eklas (talk) 07:16, 17 March 2018 (CET)

Question, will next week bliki on stations be on simpe stations, or complicated ones like Umeda Station in Osaka?--Happy mapping and may God bless you, ZK (talk) 02:33, 18 March 2018 (CET)

Then I thought of suggesting this for the weekly assignment: For slightly advanced mappers create a big interchange station which also links to other modes of transport, e.g a bus terminal or the metro system. For not-so-advanced, create a simple terminus with some through stops.--Happy mapping and may God bless you, ZK (talk) 06:56, 18 March 2018 (CET)