Drabantia's fall season has two stages: first the dry, warm autumn with colorful trees and an Indian summer vibe to it, that's October; then comes the wet, cold but mostly snowless November. It's about 2° C (35° F) outside, it's damp and misty, the sun is nowhere to be seen until 7:15 am and after 4:30 in the afternoon, and no one really goes outside unless they have to. So, what do you do with all this free time you have to spend inside? 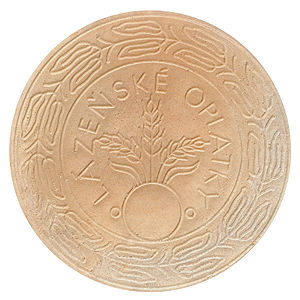 Our spa cures heart disease (and heartbreak too)

Well, lucky you, the east of the country is relatively rich in mineral water sources, so there are plenty of spa resorts. One of them you see on the map: Jařiny.

Jařiny is not only a spa resort, but also a historical town with about 13 thousand permanent residents. It wasn't always famous for the curative water. In the early Middle Ages, before the discovery of silver ore in the Elže hills and the subsequent foundation of towns like Vaberec, it was one of the largest and most important towns in the region. But then again, so was Lipka from last week's post. There wasn't exactly a lot going on in the area. The people lived a humble, peasant life with only potatoes, some cattle and Jesus.

It wasn't until the 15th century that someone noticed water from some of the wells and springs in the forest tastes funny. People in Jařiny also lived unusually long for the Middle Ages. It wasn't uncommon that people lived all the way through their 30s and even 40s. But it wasn't until the 19th century that the spa industry started booming, along with the explosion of tourism, the outburst of industry and the outbreak of lifestyle diseases, and everyone had a blast. Water from Jařiny was bottled and sold all over the country. At its peak, the spa saw over 40,000 visitors per season.

In the years 1904 - 1907, the spa resort was rebuilt in a decorative neoclassical style, as envisioned by the architect Alois Slavíček. He designed the iconic circular central square. The streets diverge from the square in 8 directions, and look like sun rays from above, which was intentional. Sun is the coat of arms of the town and the square is named Sluneční náměstí, "Solar Square." The fountain in the middle is supposedly named after his wife Emilia and is the tallest in the country at some 25 meters.

Just like every spa, Jařiny is a popular destination among the nation's elderly. There is a wide variety of wellness procedures available. You can choose from several types of baths, including mud baths, there's massages, aromatherapy or the sauna. According to the overpass query (thanks Mstr), Jařiny also currently offers the only Kneipp cure walk in the OGF world.

Some of the mineral springs are open to the public. The water is rich in carbon dioxide and sodium sulfate, and not everyone likes the taste, but it apparently has some health benefits. The resort is often visited by people with cardiovascular disease. It is believed that the water has various positive effects, e.g. improving blood flow. While you're there, you should also absolutely try the spa wafers. It is a popular local snack.

Therapy can cure many kinds of heart disease, and even a broken heart. It is another unofficial tradition that when married couples fight, one of them usually ends up leaving for the spa. And then they meet someone at the spa, um, so there was a... there was this bar slash club in the nineties... uh, anyways... uh... thank God it's not the nineties anymore.

It's currently not the spa season, and that means not all hotels are open, but accommodation is cheaper, most spa procedures are still available and there aren't as many people around. So, come visit!

Spa in Jariny looks like a nice place for old retired but still significantly rich people, really. But the short time of living in Middle Ages is a myth a bit. Yes, of course average life duration was less than 40 years but the reason for that was the high death rate of babies and children, not the drastic shortage of lifespan. Usually if someone lived calm life, they were able to achieve their 50s, 60s or even 70s when they were killed by diseases like cancer or other typical for old people, some of which we can cure now. --Rüstem Paşa Discussion 11:14, 5 November 2018 (CET)

Amazing job done there! Reminds me on the famous Slovenian spa city Rogaška Slatina where I had a great vacation, although Jariny looks much better. Fun fact: listopad is October in Mallyorian a.k.a. Croatian. -- Ante44 22:45, 5 November 2018 (CET)

Thank you! I love spas! There is a different similarity between Czech and Polish in the name květen. It's May in Czech, but kwieceń means April in Polish. --Eklas (talk) 09:10, 6 November 2018 (CET)

Actually it's kwiecień. Nevertheless, you almost got it right! :) And Jařiny makes me think of jarzyny which is a fancy word for "vegetables". --Trabantemnaksiezyc (talk) 20:40, 6 November 2018 (CET)