Quentins State University (QSU), better known locally as Quentins University and officially Quentins State International University, is a large university in Quentinsburgh, Freedemia. QSU is a STEM school, meaning that they largely focus on fields in health, technology, the sciences, and engineering. Programs do range beyond that, however, with programs for education, general ed classes, and more. map 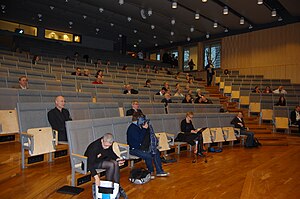 A lecture hall in the QSU Health and Medicine College

Don't let the name make you think QSU is a second rate school- Quentins State International University is a top notch school- one of the best in Freedemia and one of the top 20 in the world. It now offers majors in everything from Art to Architecture to Biology to Medicine to English to Engineering to History.

At one point a change in the name from Quentins State University to Quentins International University was considered. However, university board members and students voted down the change, preferring the hetitage the school already had. More recently, the campus tends to simply be called Quentins University or QSU by most students, faculty and fans.

However, in 2015, the university board members and the students came to a compromise, adding the term International to the name, making the school Quentins State International University to emphasize the fact the university is open to all students, no matter what country they are from.

In 1900, the Freedemian College System (Now the National University System of Freedemia) was founded. In 1917, the FCS decided that the growing Quentinsburgh area would benefit from another college, citing the global move towards the sciences and technology. For many years prior, Hayes University, founded in 1807, had been the only major university in the area, and as a liberal arts university, they had specialized more in social sciences, law, language studies, history, literature, and the arts. Read University had been founded in 1910 to resolve some of the issues, but while offering limited STEM majors, Read University was also designed to be a liberal arts university to help more students have access to an education. (Hayes University was struggling to handle the volume of students.) FCS decided to approve a major university based around the natural sciences, math, architecture, engineering, and medicine, and decided on the name Quentins University.

Aquiring the land for the campus would prove to be difficult. The target area was downtown Quentinsburgh, but most of the space had already been occupied. The school ended up using imminent domain to take out a neighborhood of mostly warehouses and industrial buildings west of the Garland Park neighborhood, a choice that would be quite controversial at the time. Eventually, the campus would end up growing to engulf a small part of what was once considered part of the Garland Park neighborhood. The campus opened in 1923 with one building (the Wilton building) along what is now Quentins University Parkway and one dorm across the street (which has since been torn down to may way for a parking deck). map Over time, the campus grew, and by 1935, a large amount of the campus (much of which has been torn down and replaced over the years) was built and many new programs began to be offered.

The school would grow extremely rapidly, starting off with a student population of about 600 in 1923 to a student population of 4,000 in 1940. Programs grew and expanded. In 1945 the school started programs in Education, the Arts, and Engineering. Soon, programs for the natural sciences would grow, as well as the School of Health and Medicine and the college of Engineering. In the 1960s, schools of Architecture, Landscape Architecture, and Urban Design would be added into the mix, and research would become a larger part of the university's science and Engineering departments. Sports programs in baseball, basketball, soccer, gridiron soccer, volleyball, and foosball were added in the 1970s.

The campus has recently expanded, with new residential areas, a new section of campus, and a new stadium. It is currently expanding to have more class space, new programs and more campus resources. Eventually more classrooms will be moved to the new northern part of campus, while more newer dorms and student spaces, as well as an expanded medical school, will be located at "Old Central" Campus, as the older southern part of campus is respectfully known. 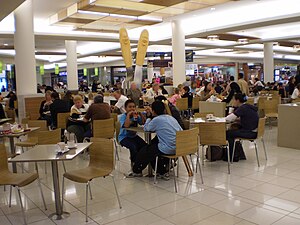 QSU has a newly improved campus shuttle to serve its growing campus known as the SnapperShuttle. The route is operated by QUARTA, Quentinsburgh's transit authority.

The SnapperShuttle consists of 3 lines (although one has two versions), the Green Line (G) and Green Line Game Day (GGD), the Brown Line (BR), and the newest route, the Lime Line (L).

The Green Line and Brown Line run inverses of each other, looping around Old Central campus before heading up to the new northern part of campus via Raleigh Road. On game days and select trips, the Green line (then labeled the GGD), continues to T. Garland Stadium and Quails Field.

The Lime Line serves as an off campus connector, looping around western Old Central campus once before running out through the Garland park neighborhood, home to many off campus students, and out to Freedemian Square Plaza Mall and DaSilva Station.

QSU is home to the Sanderson Scholars Program. The late President Walter Sanderson was a proud attendee of QSU, and upon his death he left a large sum of money to the school to create a scholarship and enrichment program for the best students in Freedemia and the world. It was meant to be for students who had "integrity, values, drive and the desire to make a difference". Students who get into the extremely selective program get a full scholarship to QSU, as well as internship and job opportunities, community service initiatives, study abroad opportunities and class trips.