Crawl Out Through the Fallout

It is a simple historical fact that in the final months of the Great War, humanity propelled itself into the Atomic Age with the detonation of the first nuclear weapon. In the aftermath of the bloodshed, the world looked at the atom and wondered: was this to be a tool for the betterment of humanity, or the method of our own extermination? But those holding their breath for war were soon proved wrong, as scientists harnessed the atom to provide virtually limitless energy. Soon, all sorts of luxuries thought fanciful became a reality - computers, nuclear-powered cars, and space travel. The atom ushered in a century of excess, and we were all too happy to overindulge. But by the mid-21st century, the world awoke from its dreams with a start. Our overindulgence had come at a price: the world's resources, which had seemed so plentiful before, were now running out. Every nation on the planet scrambled to secure whatever it could within its resources, and if it didn't have enough, its neighbours did. A century of peace unravelled as what precious few resources left were jealously hoarded by the victors, or sabotaged by the vanquished.

Vodeo, its oilfields long since dried-up and its uranium reserves (once estimated at having some 500 years' capacity) starting to run out, had one last resource left: coffee. Drabantia, seeking to secure what little coffee fields were left to supply its own coffee shops, attacked without warning nor mercy. What had been expected to be a short, sharp attack followed by tough negotiations devolved into a protracted and brutal fight for supremacy. It was total war, and for one to live, the other had to die.

It is a simple historical fact that the end of the world took as little as two hours. In that time, the two countries had been reduced to ashes, the coffee fields the two had fought so brutally over scorched by atomic fire and poisoned by radiation. Yet those who had expected this to be the end of history found that it was just the start of a bloody new chapter. But war... war never changes.

Atomic Vodeo, Or: How I Learned to Stop Worrying and Love the Bomb

While the story I recounted above would make an excellent premise for a series of video games, it is thankfully just fiction (I'm still watching you, Eklas). A story of the Coffee War moving from the battlefield of the consumer's wallet to the towns and cities of Vodeo is an unusual escalation (the RVAF has its bombers on standby though, just in case), but it nonetheless brings us to today's entry... which is running two or three days late. I'm sure you all managed to entertain yourselves down in your fallout shelters in the meantime.

The arrival of the atom bomb came as a surprise to the world, who realised they now had to get used to living next to the first weapon that could bring about the end of humanity. A few nations pursued weapons of their own - the Federal States built up a substantial arsenal in the years and decades following the war, while the Ingerish rocket programme of the late 1940s was a prelude to its own nuclear devices in the 1950s. The Commonwealth Space Centre near Landsborough was also designed with the ability to launch ICBMs in mind, although the actual construction of a missile facility was eventually discarded due to expenditure.

Vodeo got used to being a potential target in the event of nuclear war, thanks to its alliances with the Ingerish Commonwealth, the FSA, and other liberal democracies. A number of radio and television plays, films, and even songs were created between the 1950s and 1980s looking at what might happen to the country if the worst came to pass. While 1983's Radiation is the most well-known, it has overshadowed others, such as the legendary comedy western TV show Cactus Kate (VBC, 1957-62); while the show was ostensibly a parody of life on the Archantan frontier in the mid- to late 19th century, there is some speculation that the show was actually set after a nuclear war, backed up in part by a few vague hints that it's not the 1870s, but rather the 1970s. 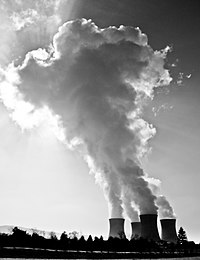 Settle down, it's water vapour.

The 1950s had seen something of a nuclear panic, but as the years went on, nuclear war slipped further out of mind for most Vodeans, assured that such a war would never happen. For most Vodeans, the closest they would get to feeling atomic heat would be from nuclear power, which arrived with the switching-on of the Wintergreen Atomic Generating Station in Prihor in 1962. A few new power stations appeared over the course of the next decade or so, but plans for more were halted as the worst economic downturn since the 1930s hit in the mid- to late 1970s.

Nuclear energy came back to the fore in the 1980s and 1990s, but in the 2000s was pushed aside in favour of wind and solar; these have questionable benefits to Vodeo as its position on the equator means it is often cloudy and without a great deal of wind (although as always, that depends where you are in Vodeo). A series of power shortages between 2006 and 2009 had people becoming concerned about the reliability of the Vodean electricity network. Coupled with growing efforts to mitigate climate change, and it was time for the atom to shine once more. The ascent of Victoria Stobie to the premiership brought with it a new attitude toward atomic energy; her plan was bold, but simple: phase out the oldest coal, oil, and gas power stations within a decade in favour of nuclear power, with a plan to have up to 40% of Vodeo's power generated through atomic means by 2035. Three new stations have been switched on since 2017, with another two scheduled for completion by 2020. Public support for the plan stymied the opposition Liberals and Greens, who have both had to reluctantly accept that the future of electricity in Vodeo is atomic. Nuclear power? Vodeo says "yes, please!".

A Sanctuary in These Hard Times

And so we come to Sanctuary, one of Saviso's southernmost suburbs. While it is one of Saviso's hundreds of suburbs, it is different from the likes of Point Eceinin in its design and function. Whereas Point Eceinin and its mid-century ilk were simply designed to be places where one lived and commuted to the city, Sanctuary is more a community in and of itself, a town inside a city, if you will. The suburb appeared on the map around the turn of the millennium, as developers turned away from the big sections of decades gone by and focused on denser suburban areas containing smaller sections, or in some cases, townhouses and apartments. While some disparage these suburbs as being so dense that one can hear their neighbour's cutlery drawer being opened, it has managed to slow down the city's once uncontained sprawl. The Sanctuary Marketplace was designed partly as a shopping mall, and partly as a 'community hub' (although that was the same idea of the Palm Lanes Mall in Cavendish Park, and that went up in the '50s) around which the rest of the suburb is built.

It's pretty typical of a modern Vodean suburban development, so why do I pick Sanctuary in particular for an entry on nuclear energy? Fallout fans will want to zoom in and have a closer look, they might find a few names that seem awfully familiar. I'm a big Fallout fan, and with the arrival of a new entry in the series, I couldn't resist paying homage to it on the map. Sanctuary has been sitting there for a few months now in readiness for the arrival of Fallout 76, but as it happens, I found myself enjoying the game so much that I simply forgot about the accompanying entry. Oh well, I guess Par... Par never changes.

Please affix your signature and timestamp. Where were you in 2102?

Fallout is life. Fun fact: Adelaide II is actually named for my Fallout 4 character, the same one I've had with each new game I've started since 2015. You'd think she'd be getting sick of getting nuked over and over again by now. — ParAvion (talk) 20:42, 18 November 2018 (CET)

That really would be a sign of the end times. I dunno though, maybe I'll find some dingy little alleyway in Holme and open one up there (I'll give you "stinky Empire Coffe", sunshine). — ParAvion (talk) 20:42, 18 November 2018 (CET)