The sun has arisen on the year 2018 for the last time. Across Vodeo there is great excitement for tonight, for at midnight the nation will erupt into a great frenzy of cheering, drinking, partying, and kissing complete strangers. While that's a nightly occurrence in Southbank, the rest of the country prefers to bundle it all up for one night of the year. Of course, in Cambria the celebrations are already underway, given the province celebrates its independence from Ingerland today. It's been 293 years, you'd think they'd let it go already.

Today marks Vodeo's second birthday on OGF. It's been quite a major year for Vodeo, what with mapping continuing at its usual sluggish frenetic pace, a great expansion of the country's economy, and closer ties with a number of countries around the world. Yes, 2018 shall go into the history books as the year Vodeo helped build the Commonwealth, embraced its inner nerd, and got into one hell of a Coffee War. As is to be expected at this time of year, we shall commence with the year in review - fruity drinks with little umbrellas will be passed around shortly (your choice of rum, Vigour, or 88 cola). Somebody get the lights while I thread this projector.

Or: "In Which Vodeo, a Nation Destined for Greatness, Became Greater Still in This Calendar Year" Catchy, ain't it? 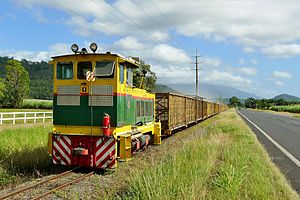 CAN YOU HANDLE THE EXCITEMENT?!

How could I not start off with Saviso, a city of high hopes and even higher parking fees? We began the year in the bliki with a look at Lake Wririas, Aslington, and North Harbour, continued with a trip to the hospital, and after swinging by Wellesley, we ended up in Exchange Square, where numbers go up and down, and people's fortunes along with them. At the end of June, we took a wild ride through the wild parts of Saviso - namely Southbank and St Kitts, and as a way to cool you all down, I followed it up by taking you out to the cane fields of Casserres. The back half of the year didn't see much of Saviso, save for a look around Sanctuary in November.

Other highlights I didn't include in the bliki from Saviso this year included a bunch of new suburbs, more detailed mapping of the city centre, and the tearing out of large parts of the city that just didn't look right anymore. I'm still a little unsure about some parts of the city even now, but until such time as I can come up with a plan for what to replace things with, I guess they'll get a stay of execution.

2018 was a big year for Holme, not that you'd know from reading the bliki. While Saviso was stealing the attention (as Saviso usually does), Holme was quietly making some changes - bloody big ones. While the geography of Holme is mostly the same as it was at the year's open (where did those lakes and mountains come from?!), the city itself looks markedly different. The old grid that I inherited when I took charge of TA107 two years ago is long gone, and there's not a trace left. In its place, I've tried to build a city that looks like it's grown over the past four centuries without four centuries' worth of planning. While there's still a long way to go, I'm liking the city's new shape, and given the response to There's No Place Like Holme for the Holidays, it seems you folks do, too. A shout-out to Hopesmarch for being cool.

Ah, here stands a magnificent city. In 2017, Avington was a few disjointed motorways and a couple of poorly-planned roads, but at the end of 2018, we see a beautiful metropolis rising from the coast, hugged tightly by the Googies from two sides. July's entry showcased the city centre, and while there's still a long way to go before the city's ready for big-time exhibition, I'd say it's already well on the way. In November I did a little work around Caterham, and it's this sort of mapping I want to go with for the likes of Avington, Holme, and Saviso going forward - small towns that eventually coalesced into a big city. No slouching, Belvedere and Macquarie, your time is coming soon.

Ah, it's going to be a good day in the Winterless North today!

I'm more than a little proud of Empire's End. While the city looks nothing like its original paper inceptions, I think it's one of my best places on the map so far. It's one of my most realistic-looking cities, the central shopping district along Commerce Street is packed with businesses, and it also has some sort of weird meaning to me that most other places in Vodeo don't - it somehow feels more personal and more me in a way. I still think the border crossing could do with some work, but overall I love how the city came out.

Poor Radern's had an identity crisis over the last couple of years. What was once the capital of the Principality of Vadiorare (back in the days when I hadn't sorted out Vodeo's history) is today the capital of the province of Vadiorare, and yet while the name's the same, the street layout couldn't be more different. Whereas once upon a time the city was a mad tangle of disorganised streets, today there is order in Vodeo's southernmost city. Perhaps my favourite thing about Radern is its geography, and the way the city has to squeeze itself in between the hills. It reminds me of places close to home, really.

The New Taredo Peninsula hasn't been in a bliki entry (yet), but it's caused a bit of a stir nonetheless thanks to certain goings-on north of Landsborough. The original plan for this peninsula, on Avalon's southern coast, was just a simple farming one with a few tourist towns scattered about, including Santa Rosita, where the Castellanese attempted to build a colony in 1498 (and failed miserably by 1505). However, with Turnsole80 and I spending a good portion of the year overhauling the Ingerish Commonwealth, it became obvious that a space port would be a necessity, and the New Taredo Peninsula ticked all the boxes. The peninsula today looks grand, and even though it still needs more detailing work, I'd say that the area is one of my personal favourites from this year. Keep your eyes pointed here, because there's more in store for 2019. What's that, Tarephia? You have ambitions of space walks? Step into my office...

Ah, here's another favourite. I adore the Welcome Islands, because they remind me of home more than any other place on the map at this time. The islands' history is a hell of a lot of fun, the geography is some of my best so far, and it's a place that I'm desperate to be able to go and see. A midnight walk through Port Elizabeth sounds like heaven to me, but on the other hand...

Crafers has always annoyed me. Love the city though I may, its layout and design have just never quite sat right with me, even back when I exhibited it last year. In the last couple of months, I've worked on tearing out most of the city and beginning anew. While the construction works have overshadowed the long-awaited opening of the M3 bypass, it's for the city's own good. I hope to have something good to show you next year once I have things sorted out a bit better.

Now we separate the men from the boys.

You didn't think I was going to forget about Curious Vodeo, did you? Of all the work I've done this year, the five October bliki entries were my absolute favourites. I had a blast writing about the pirates of Welcome Island, the hauntings of Holme, strange things in the skies, the mysteries of the Parlour swamp, and the horrors of Kingseat. I won't lie, I did get spooked by my own writing on occasion, and I'm hoping you did too - even if you're not a believer in the paranormal or supernatural, maybe you'll think twice next time you pay a visit to these sunny (and ethereal) shores. Next year's stories are well underway, and I'm already excited to share them with you.

In the 2017 end-of-year entry, I expressed my wish to get away from the big cities and move out into the country. In some ways I can say I succeeded, in others, not so much. Radern and Welson both appeared on the map at last, Lake Razorback finally settled down enough to allow for more permanent mapping, and in various places, the road network fanned out and towns began to spring up. Not as many as I'd have liked, though, but that's something for next year. Brynderwyn joined Crafers in the reconstruction frenzy, but in an even more extreme fashion - virtually nothing of the old city remains, save for the current street layout, which was uprooted from its old position at the city's southern edge to become its new centre.

Let's see how well I did with what I said I would do this time last year, and what I actually did. This could get ugly.

Well that was grim. Oh well, let me make some more forecasts, predictions, and prognostications that we can all have a jolly good laugh at this time next year.

Two years already, who'd have thought? Again, my thanks go out to all of you for your support this year, Vodeo wouldn't be the nation it is without you. 2019 is shaping up to be another big year, what with big mapping plans and a general election on the horizon. For now though, let's kick back and welcome the new year in the way Vodeo does best - by partying like hell. Happy new year!

Please affix your signature and timestamp. Tonight we're gonna party like it's 1959.

A happy new year to you! You did amazing. You accomplished a lot in one year. I'm looking forward to 2019 as well: while I currently don't plan to revive the bliki, I want to continue with large-scale countryside mapping as well as drawing the historical city and former capital of Drabantia, Krále Hora. And, stepping into 2019, having left the Coffee War in 2018, I promise you it's the Vodean soft drinks that are going to face some fierce competition this year. --Eklas (talk) 23:21, 30 December 2018 (CET)

A happy new year from the sweltering West Island. You've done a great job this year, lets hope we can continue the trend in to 2019 and make it another amazing year of mapping goodness! --Turnsole80 (talk) 04:54, 31 December 2018 (CET)