The City Sprint continues apace. Across Gerrise, buildings are rising from the dirt, roads are spreading out from Aulsebrook Square in all directions, and even the very ground itself is bending and twisting to conform itself to this grand new metropolis of the south. Not even the burning sun beating down upon the city can slow progress - the shipments of steel and concrete from other parts of the country are equalled by the shipments of ice, soft drinks, and rum. The Queen herself stopped by the other day to have a look at how things are coming along; rumour is that enquiries were made as to the cost of moving Prosford Palace to atop Military Hill. Let us now take a trip around the city to see where those hard-earned pounds are being put to work.

Just south of the city centre, where the Garnet River twists around the hills, we find the suburbs of Steadtown, Tamra, Tory Bend, and Waycross. These suburbs are based on those around central Brisbane, around which the Brisbane River bends, and are intended to give a rough approximation of the extent of the Gerrise urban area just prior to the gold rush of the 1850s. Waycross is particularly dense, owing to the fact that it appeared practically overnight as the city boomed and began its relentless push into the Western Valleys.

Tamra, squeezed between the Garnet River, Peadons Stream, and the hills, is the home of the University of Gerrise, based mainly on the University of Otago in Dunedin. It is a fine university, boasting alumni that have gone on to make big names for themselves in areas as varied as technology, fine arts, and native affairs. Many people look down on the university, most often as they drive along the Tamra Flyover, which cut right through the campus when it was erected in the early 1960s. The flyover's construction wasn't popular with students at the time, and while many still consider it an eyesore, the city's geographical constraints mean that it is an essential component of Gerrise's motorway system; without it, it's a long drive through the Peadons, Strid, or Transistor Valleys.

Steadtown and its neighbour across the river, Tory Bend, are quite affluent and well-to-do. While Steadtown has grown steadily (if you'll excuse the pun) in recent years with new apartments and offices, Tory Bend has jealously guarded its old Adelaidean villas and gold rush-era charm. Such is the historical significance of "The Bend" that when a huge interchange was proposed in the late '50s that would have wiped out much of the suburb, the local reaction was so ferocious that the plans had to be amended; the M1 now closely hugs the western bank of the Garnet for fear of reprisals from Tory Bend locals should it roam too close to Luggate Street, while a much more compact interchange and tunnel were built at Wingate Street. Be warned should you decide to take a late-night stroll around Steadtown, however: something truly ghastly happened here many years ago, but more on that in October.

Southward now, where we find the sparkling waters of the Bedivere and Seabrook Bays. Seabrook is the main suburb around here, established in the 17th century as a small fishing and farming town, which over time grew to become Gerrise's "second port" (behind the portage facilities then present in Port Gerrise). Today, it is quite a fashionable bayside suburb, populated with boutiques, cafes, and seafood restaurants popular with the marina crowd. Seabrook, as well as its neighbour north of the bluff, Kildall Bay, are based on Monterey, California, home to the late Gary Kildall, who created the CP/M computer operating system, and is a nod to one of the real world influences behind Transistor Valley. In time, I plan to have Isley Street and Foreshore Drive represent the famous Cannery Row that helped put Monterey on the map, with old fish factories converted to new uses, like hotels, trendy places to eat, and an aquarium.

But what of the port? Well, in Gerrise's early days, Port Gerrise (the small harbour Gerrise was built around) was perfectly suitable for the city's needs. However, as the gold rush took off, the bay quickly became choked with ships; one account written at the time said that the bay was so busy, "one could cross from Gerrise to Zadyn by making only short jumps from ship to ship". New port facilities were constructed at Caslon and Cordova, however these proved to be temporary as the gold rush ended and the port could breathe again. It didn't last long, and by the time of the Great War, it had become obvious that Port Gerrise was simply too small and shallow to accommodate the larger vessels that stopped by. With Gerrise swelling in the '50s, the decision was made to build a new port across Seabrook Bay from Seabrook, on flat, marshy land that wasn't doing anything else. It took some time for Portville to take off, but by the 1970s, it had almost entirely supplanted the central port, which eventually closed in 1996.

But with all that land available, it would be wasteful not to use it - particularly in Gerrise, where good building land commands something of a premium. A simple aerodrome had been built north-west of Drury in the 1920s, but eventually became woefully inadequate, particularly as bigger jet aircraft began operating. In 1961, a new airport opened at Point Mitchell, east of Portville, and over the years it has expanded to become a worthy gateway to the city. The old airport was swiftly demolished and became the new suburb of Magnetic Fields. A new motorway to the port and airport opened in 1969, and these days, Gerrise's southeast has become the city's principal industrial area. All this industry prompted the building of new suburbs, like Swanford and Edenvale, or the expansion of old ones, like Wyndham Bridge and Tanpalow. Southeastern Gerrise is primarily based on the area around the mouth of the Brisbane River, where one can find the city's airport and port facilities. 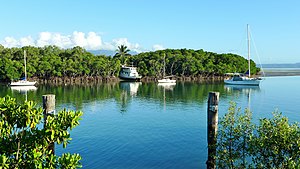 The quiet waters of the Lodira Channel are popular with boaties, casual anglers, and tourists... making them not so quiet, come to think of it.

Vodeo's location upon the equator means that the waters of the Sea of Uthyra are generally quite calm and peaceful; while sailors appreciate this fact, in the days of sail, ships could be stuck in port for weeks on end while they waited for the winds to pick up (and port is where the rum and pretty girls are, fancy that). The waters of Harrington Bay are no exception, even when a storm rolls in, thanks to the presence of Vodeo's largest island just off shore: the Isle of Scona. Clocking in at more than 300 km2 and around 50 km long, it's not a particularly large island even by the standards of the Sea of Uthyra, but its perfect location stretching from Rendoran to Cordova Bay shields the city from the worst of the Uthyran storms. Separating the Isle of Scona from the mainland is the Lodira Channel, which resembles more a river filled with mangroves and small, forested islands. Leisurely boat cruises down the channel are very popular with tourists and locals alike. What better way to travel to Rendoran or Sodernai for fish and chips?

Like its real-world counterparts, Fraser and North Stradbroke Islands, just off the coast of Brisbane, the Isle of Scona is a sand island, hence its very different appearance to the more rugged mainland. While the island is quite bare at the moment, look for it to eventually be populated with any number of streams, forests, small villages, plantations, and sandy beaches - particularly the long, sweeping one on the island's east side that runs from Cape Kerr to Capstan Entrance. I'm very intrigued to see how the Isle turns out. Incidentally, the Isle of Scona originally sat off the coast of Cambria in Vodeo's third incarnation (2014-15), and then off the coast of Havilland in its fourth (2015-16). After a couple of years off the map, the Isle has returned at last, smaller than before, but no less beautiful and majestic, and this time full of tropical trees and birds.

Where To From Here

As the City Sprint sprints towards the finish line, I want to turn my attention to Transistor Valley - after all, that's what got me mapping Gerrise in the first place. While I'm generally content with how Fruitvale and Drury have turned out, I think the road layout in the valley itself needs a little work. The thought of mapping all those suburbs is rather daunting, I will admit, but I'm not planning to have Gerrise anywhere near a "finished" state by the end of the Sprint. Even so, the suits at Main, Century, Colour, and Quick would appreciate some houses for its employees to live in and some factories and offices for them to work in. With the good pace that Gerrise has set, I'd guess it won't be too long before the Transistor Valley corporations get what they want.

Right, that's enough chinwagging, let's get back to work. Okay lads, I need a school over there by tea-time...

Please affix your signature and timestamp. There's your Jeez Gerrise are you happy now you pack of savages

Always a pleasure to read these. I've been meaning to say, I'm quite fond of the street layout in central Gerrise; that subtle turn of Freeman Street and little Brierley Square give the area a nice note of cheekiness. Still a ways to go, but I already want to visit Gerrise! (PS: yaaay, 'Jeez Gerrise'!) -- Louis Walker (talk) 22:11, 18 February 2019 (EST)

Why can't I always be first to respond? :P Anyway, I like how it's come together. Seeing the Isle of Scona, I also thought quickly of Fraser Island. Also, is it just a map error, or does the northern part of the island not belong to Vodeo? FictiveJ (talk) 06:19, 20 February 2019 (CET)

Jeez Gerrise, you're going to be a pretty city when finished one day. --Eklas (talk) 06:36, 20 February 2019 (CET)
I'm loving the whole SEQ-vibe I get from Gerrise. As someone who spent 15 months calling Brisbane home in 2005/6, I'm getting many flashbacks to that wonderful and quirky city on the river. Tory Bend makes me think of St Lucia and Fig Tree Pocket - and having been to both - I can imagine the classic Vodean-style Queenslanders dominating that particular 'burb. If you want inspiration for city hall , checkout the old South Brisbane hall on Vulture Street (it even has a wiki page) --Turnsole80 (talk) 15:22, 20 February 2019 (CET)

Well, it's good to know that I'm managing to mimic Brisbane well enough. I do find it a little odd that Gerrise is an amalgamation of bits of Wellington, Brisbane, and Dunedin, but so be it. You've given me a couple of ideas, though - looking around Fig Tree Pocket, I think Gerrise could do with something like that - especially with rainforests and an animal sanctuary of some kind; I'll be sure to put the South Brisbane Town Hall somewhere while I'm at it. It's funny you should mention Queenslanders, that's exactly the architectural style I've been thinking would be common across Vodeo, given the climate and all. — ParAvion (talk) 21:18, 20 February 2019 (CET)