At the start of the year, I decided I'd do at least one entry a month. Unfortunately, a new job has meant that much of my free time is gone, and so there's not much space left to map and think. Oh well, better late than never. Let us today return to the lovely city of Crafers, and after that, we'll open the history books and get to work scribbling all over them.

Of late I have been thinking of Crafers again. One of the first cities I considered to be something resembling "done", in the last year or so it was really starting to bother me. The street layout didn't make much sense, the grids were lopsided and too big, and it just didn't look right to me. Over the last two or three months, I've been progressively dismantling most of the city and its surrounds and putting it back, piece by piece. It's certainly nowhere near done as of this writing, but I wanted to showcase it anyway.

The city centre has undergone quite a transformation. Rather than being a long grid extending right through to Rainham, it is now smaller and broken up by Cochrane Brook. Rainham, once a nondescript part of the central grid, now has its very own, interrupted by the snaking path of Rainham Road, because a perfect grid is boring. South Crafers, which never seemed to know what it was doing, has been reconstituted to be the junction point of the main roads linking Crafers with Helensvale and Longlac to the north, Linnister to the south, Brynderwyn and Holme to the east, and Endorie to the west. Tranrike, formerly a "modern"-style suburb, was completely obliterated and replaced with a much older town centre based on Eaglehawk, a suburb of Bendigo, Victoria. Most of the rest of the city is gone now, especially the terrible messes that were Redcombe, Appleby, and Sidhall. Some of the existing suburbs will be moved out of the city to form towns or outer suburbs in their own right, as they have been packed in tighter than a shirt two sizes too small.

Outside of Crafers, there have been a number of changes. New rural highways have begun to extend out from the city to link up with new towns and villages, like Cowaran, Amrein, Plentyfield, and Calborai (formerly a suburb). The M3 and M5 motorways have been removed for now, but will be put back with slightly adjusted routes once I've got the road network built up to a denser level. The Corm River, one of Vodeo's more notable waterways, is being widened and straightened out to allow for easier boat travel in the pre-railway era. All that water will help with the redesigned Helensvale Power Station now that it's been redesigned and has nicer, more powerful reactors; with another one under construction, all that cooling will certainly help. Just to the north of the power station sit some islands in the river - I got the idea for those from the islands of the Susquehanna River, upon one of which sits the Three Mile Island nuclear power plant. 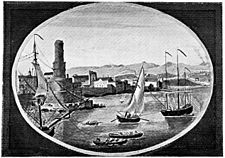 The Castellanese Hate Them! Colony Defends Self Using One Weird Trick!

The question of Consolidation

And now we come to the second part of this entry. I've been doing some thinking about Vodeo's history, finding things that don't quite work and hitting them with hammers until they do work. One of the biggest oddities in Vodeo's history was to do with the 135 or so years between independence in 1725 and Consolidation in 1860. Why would Cambria and St Austell, both recognising the vulnerable position they were in once they left the Ingerish Empire, not band together for their own good? Surely the two going separate ways would be an open invitation for the Castellanese or Latinians to attack? (As a side note, both Holme and Saviso were greatly afraid of Latina marching north and conquering them, but history has shown the Latinians couldn't have cared less about a couple of two-bit sugar plantations up north.) It just didn't make sense.

With this in mind, over the last week or so I've been working on redoing Vodeo's history between about 1720 and 1860. The new version looks a little like this: in the early 1720s, with its civil war in full swing, Ingerland begins to rescind many of the colonial freedoms and perks granted to Cambria and St Austell as a means of getting a tighter grip on the two (even though both were quite loyal to the motherland, as evidenced by the Avington Rebellion). An independence figure a little like Simón Bolívar emerges and begins pushing for Ingerland's colonies (not just Cambria and St Austell) to break away and make their own destiny. For a time the Castellanese sail by and try to take the colonies for themselves, but thanks to a combination of a bare-bones Ingerish fleet, plenty of Castellanese-hating pirates, and their own errors, their efforts are in vain; the colonies' success fuels the independence movement.

At some point in the mid- to late 1720s, the colonies break free and enter a loose confederation named Equatorial Tarephia. This confederation, while suiting their interests at the time, begins to unravel by the 1740s as a combination of factors start pulling Holme and Saviso apart. Attempts to repair the confederation in the 1750s fail, leading to a new state with a much stronger central government in 1760 - the Vodeo we all know and love today. But what of that independence chap? I'm thinking perhaps he married one of the pirates and went on to become king. "The Pirate Kingdom" is such a good nickname for Vodeo, don't you think?

As for the war itself, last year I proposed a general timeline of around 1715-25, however after looking at the other colonies that broke away around that time (Cambria, St Austell, Wiwaxia, the Veronan Colonies, and Rogolnika), it would make more sense to shift the war forward a few years to accommodate it all, hence why I didn't name any specific dates in the 1720s - the old timeline needs to be adjusted to suit.

I'll be continuing my research into similar events in the Americas during the 18th and early 19th centuries, but in the meantime I'd interested to hear your thoughts or suggestions for this new Vodean history. Given that Vodeo now has another hundred years of making money rather than pushing and pulling against itself, it means that our dreams of world conquest living in peace and harmony are that much closer.

Anyone for (Empire) coffee?

Please affix your signature and timestamp. Grievances against the Governor heard at Holme Gaol tonight.

Does no one comment on bliki's anymore? Makes me sad :( I realise the PM I sent you probably wouldn't quite work for your pre-consolidation plans like I first thought it would (I was thinking they were still loyal to Ingerland) ¯\_(ツ)_/¯

I see you've been playing with power stations too. Good work. Like you, I also based the technicalities of my nuclear power station on TMI. Albeit the soon to be closed TMI-1, rather than the oopsie-afflicted TMI-2. So Ōruawai-1 has the same power outputs (820 MW) etc. Ōruawai-2 is based on the currently under-construction Hinkley Point C (with hopefully less of the drama and cost issues that stations is facing). Have you given much thought to the technical details of your power stations, or are you happy just to map them and leave the details for another day? --Turnsole80 (talk) 06:01, 28 June 2019 (CEST)

I'm not really a technical details sort of guy, I'm content to just make sure they look nice on the map. I did opt to make the reactors at Helensvale much more powerful - up to 1600 MW each - as they would be expected to help keep the lights on way over in Holme and Endorie as well. I want to do more work on dotting the map with power stations in the future, even if they're not quite as well-detailed as your network. One that I'm looking forward to mapping is the Wintergreen Atomic Generating Station, the country's oldest nuclear power station, and thanks to a refurbishment, now one of its most powerful. — ParAvion (talk) 22:42, 28 June 2019 (CEST)

I would like to comment on blikis but my wiki duties are restricted at the moment. If I were to reinstate my blikis and commenting it will involved spewing Antigoan propaganda.--Happy mapping and God bleses you, ZK (talk) 06:16, 28 June 2019 (CEST)