Slavery is one of mankind’s most sinister crimes. It has been practiced in the real world since antiquity, and while great steps were taken in the 19th century to rid the world of this evil blight, in some places it continues to this day. For Vodeans, it is a sad historic fact that slavery was practiced here for almost two centuries, something that some would like to forget while others would like nobody to forget. More than 200 years on from the end of slavery in Vodeo, it is still a subject that touches a raw nerve – a stain on the country’s nearly spotless reputation. Today we will examine the history of slavery in Vodeo, and visit a place where the anger of slaves boiled over into a rebellion that will seemingly never end.

The story of slavery in Vodeo begins with the Ingerish. The Castellanese, known for using more than a little force, didn’t think the local tribes were worth enslaving, while the Rhysiogans thought slavery to be a wicked and morally indefensible act. The Ingerish weren’t bothered by all this, though – they were in it for the money. It is worth pointing out that very few of the local tribespeople were ever enslaved – almost all of the slaves were shipped in from other parts of the world. The Ingerish Civil War closed the taps on the slave trade for a while, but after Cambria and St Austell broke away to form the Confederation of Equatorial Tarephia, it was back to business as usual for the slave merchants. As the country’s four principal ports, Avington, Holme, Brynderwyn, and Saviso made quite a bit of money off the trade alone.

Slave labour was a vital part of the economy in the 17th and 18th centuries. Physical labour was hard enough for the settler classes back home, but in the equatorial climate of Vodeo, it was brutal. The solution to this problem was quite simple – send the slaves out into the fields and into the cane mills instead. The work was gruelling, even more so in the cane mills, where the refining process required furnaces that made working conditions even hotter and more miserable. Burns were commonplace, and overseers armed with rods or whips would give anyone who they considered to not be working hard enough a sound thrashing. Slaves would often be overworked and underfed (or even starved), which led to low birth rates and high mortality rates; this meant that the entire system was not self-sustaining, requiring a constant importation of new slaves.

Slavery was a very popular institution amongst the settler classes (the slaves themselves obviously thought much less of it), who enjoyed good living standards in a fairly wealthy part of the world. Not everyone believed in the system, however; as early as the 1650s, religious folk had voiced their displeasure, but they had been brushed aside. Attempts by abolitionists in the 1720s and 1730s to try and rid slavery from the new confederation had likewise failed, and occasional revolts by the slaves themselves had the outcome you would expect. The first large-scale push for abolition came in 1769, when the Committee for Effecting the Freedom of the Negroes was established in Saviso. They fought hard against the plantocracy, and ultimately succeeded in ridding St Austell of slavery in 1798. The group’s success spurred other groups around the country to fight to end the practice, and Queensborough and Cambria eventually followed suit in 1803 and 1805, respectively.

That was the easy part. The last province left was Avalon, which like the others had a significant plantocracy class, but unlike the others, its parliament was completely dominated by it. Whereas Saviso, Holme, and Silverton decided the moral imperative was more important than the economic, Avington was more interested in the thousands of pounds it was making each year from slavery. While the more educated townsfolk might have been against slavery and all it entailed, slavery still ruled in the rural parts (which back then was virtually the entire province).

Now that I have set the scene for you, we come now to the town of St Anne’s in December 1806. St Anne’s is a pleasant place situated close to the centre of the province, and for most of its history was inland Avalon’s largest population centre (since overtaken by Stirling in the 20th century). The town prospered thanks to its fertile soil, watered by the mighty Pralack River and the runoff from the Googie Mountains to the east. In 1806 the town was doing well for itself; it had a population of around 4,000, and prospered as a river port that specialised in all manner of crops grown around the region.

The story of the St Anne’s rebellion has taken on something of a mythical status in the last 210 years, and as such it is hard to separate truth from legend. What the ultimate cause of the rebellion was is unclear, but we do know that it began on the Adams plantation outside the village of Soley sometime on the night of Christmas Day and Boxing Day 1806. The plantation manager, a man known for his vicious cruelty, was killed alongside his family and assistants, and the slaves claimed the plantation for their own; their plan was to resume production but without cruelty, and with the profits going to the slaves rather than the whites who ran the plantation.

The second stage then went into effect sometime on Boxing Day morning, when a group of slaves were admitted into the small fort on Black Street in St Anne’s to deliver wood, a regular event. The slaves had hidden knives in the wood, which they used to kill the soldiers and take the fort for themselves. With the fort’s armoury under their control, it didn’t take long for the slaves to take control of the town, and before long groups of slaves were fanning out to start uprisings on other nearby plantations. By New Year’s Day 1807, seven plantations had fallen to the slaves, with only one white plantation family escaping with their lives. Marvelling at their success, the slaves declared the establishment of the Free Men’s Republic that same day. 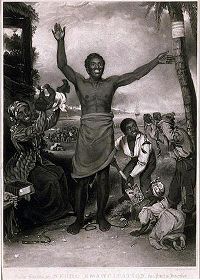 Emancipation came to Vodeo in stages between 1798 and 1812, but the price that was paid to win it cannot be counted in pounds, shillings, and pence alone

Unsurprisingly, Avington was less than impressed when news finally reached them a few days after the uprising on the Adams plantation. A militia comprising more than 200 men, including a number of plantation owners and their assistants, descended upon the town on January 10. By this stage more than 400 slaves were defending the town, which had been all but abandoned by the white townsfolk. A long firefight soon took place in the streets of St Anne’s, which to the surprise of everyone, the slaves won. Unable to bear the humiliation of defeat, the commanding officer ordered the town burned to the ground and any slaves killed on sight. Trapped in the burning town, the slaves decided it was better to die free than live enslaved, and so stayed to meet their fate. That night, St Anne's was destroyed, and with it, the rebellion that had promised the slaves their freedom.

The St Anne’s rebellion has understandably entered Vodean history as one of the country’s most tragic and regrettable events; yet out of the tragedy came something good. Word of what happened in St Anne’s and the inland did not take long to spread across the country, and while the Avalonian parliament might have expected news of the rebellion to have hardened attitudes against the slaves, it actually had the opposite effect. People around the country were horrified at what had happened, and pushed the national parliament in Holme to do something to finally end slavery. Avington, which had for a while been uneasy about retaining a practice that was both unpopular and had been abandoned by the rest of the country, became a hotbed of abolitionism nearly overnight. The issue was debated ferociously, but it was the election of a wave of abolitionists in the 1809 election that finally tipped the balance. On February 29, 1812, slavery was abolished across Vodeo, and the evil practice which had blighted the country for nearly two centuries finally came to an end. Most of the slaves who had been freed left their plantations, either to settle elsewhere or to return to the lands of their birth, something which was provided for between 1814 and 1826. Some chose to stay as paid workers, and a few even went on to own their own plantations. At the 1818 election, Jacob Gilbert became the first former slave to enter Parliament; would go on to enjoy an illustrious career and a knighthood before his death in 1839.

Today, St Anne’s faces its dark history honestly, and a number of parks, streets, and statues around the town pay homage to those who fought for the slaves’ freedom all those years ago. Over the years there have been reports of strange sightings around the town. The distant flickering of torchlights has been seen in the fields near Soley, dark figures have been seen roaming the streets of the town in the dead of night, and in the slavery museum (situated on the former site of the town's fort), staff have felt the inescapable feeling of being watched, and upon turning around, see two small slave children staring at them. Should you visit the Murray Street cemetery and feel cold shivers run down your spine, you will be far from the only one – most of the slaves who died in the rebellion are buried here, in some cases face-down and several to a grave, as if to add insult to injury. This may explain why a number of ghosts have been sighted in the cemetery grounds over the years, including one with blood-red eyes, its face twisted into a grimace of pain, and whom local legend says is hunting for the men who killed him and his comrades that fateful day.

I have spent a lot of time over the last year or so thinking about slavery in Vodeo. While I’m under no obligation to have it as part of Vodeo’s past, I felt that given the history of slavery in the Caribbean, an area which has strongly influenced Vodeo, it would be historically accurate for it to have been present. I created the revolt at St Anne’s after giving the timeline a lot of thought; while St Austell, Cambria, and Queensborough might have been more willing to do the right thing and end slavery, with it being such an important part of the economy, there had to have been some significant push-back, more so than the aforementioned provinces had encountered, thus Avalon’s reluctance to end it. Given the sensitive nature of this week’s entry, I felt it would be inappropriate to treat it lightly, and I hope that I have conveyed that in my writing.

We will travel next week to the Bunenton Hills outside Silverton, where one road in particular has gained a fearful reputation for strange-goings on after dark.