Just a sandbox, with some rubbish and random stuff. Nothing more. Nothing less.

The Protection of Ingerish Trade and Enterprises Act was an Ingerish Act of Parliament passed in 1852 designed to protect Ingerish nationals themselves and their business operations set up in former colonies which are at risk following the colonies' self-governance, transfer of sovereignity or formal independence from Ingerland. Under the Act, any new government or administration taking over the former Ingerish colony have to protect the rights of workers in the company and minimise any disruption of production or operations following any political change.

The Act was considered controversial in some colonies which sees the Ingerish settlers and their business a threat to the local community and their sovereignty. The Act was further criticised by later independence groups to have hindered negotiations for self-determination of the various colonies. The Act was seen as the basis for the future Commonwealth Free Trade Agreement, which will come into force in the middle of the 20th century.

In the early 19th century, a handful of colonies attained independence, such as Vodeo, Wiwaxia and Kadmar. Several Ingerish nationals, having made a new life in the colonies and set up their business, have argued that their rights have been threatened by their new respective governments. This is despite the fact that their rights have already been guaranteed in various discussions for the colonies' independence, as said by the new governments. While the governments denied such allegations of violations of their rights, successful lobbyists managed to persuade the Ingerish government to come up with a bill to formally protect its citizens and their businesses.

Effectively on 1 June 1853, the bill, having debated upon by the House, has successfully been passed. The Act, however, drew immediate criticism from the already-independent government which sees the act as interfering their economic affairs. In addition, the governments complaint of not being notified or aware of the bill before it passed. The governments immediately withdrew their ambassadors and protested over the Act.

The Belphenian Sea (Nihonish: ベルフェニシア海 Berufenishia umi; Kuehongese: 㴜备分雅 Biển Bị phân nhã) is a sea part of the Asperic Ocean. It is west of the Ardentic Ocean, and ends at the Sound of Pa and the Gulf of Axia to the west. Countries bordering the sea includes Orinoco, Kuehong Belphenia, and Pasundan-Padjadjaran. The sea carries tremendous strategic importance; one-third of the world's shipping passes through it, carrying over $3 trillion in trade each year. It contains lucrative fisheries, which are crucial for the food security of millions in Northern Archanta. Huge oil and gas reserves are believed to lie beneath its seabed. There is also a number of islands in the sea. The sea and its mostly uninhabited islands are subject to competing claims of sovereignty by several countries. These claims are also reflected in the variety of names used for the islands and the sea.

The dispute can be traced back during the Volkman era (the 1950s to 2011) when the nation's missiles programme has negatively impacted trade in the region. Even after Belphenia's mass withdrawal of its troops in the sea after the fall of the regime, the dispute still continues, as the new government maintains that it still holds historic rights over the sea, which has been ruled out many times by the Assembly of Nations.

The Republic of Meilan is governed by a President which serves as the head of state and leader of the executive and legislative branches of the country. Meilan has one house of Parliament consisting of 185 Members of Parliament that meet in the Great Hall in Beishan. The executive branch consists of the President and ministers. The third branch of government, the judicial branch, is headed by a Supreme Justice of the Republic with four associate justices.

The nation of Meilan has four levels of administrative divisions:

The following table shows the structural hierarchy of the administrative divisions of Meilan:

The following table shows a list of the administrative divisions of Meilan, down to county-level:

The following table shows summary information of the provincial-level and prefectural-level divisions in Meilan:

This is a list of mayors of Balonis City. 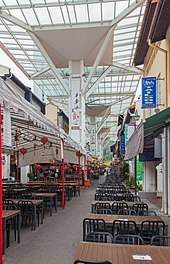 Grylster (also known as Ward 17) is a district in Huntington, Federal States. A large section of it is an ethnic enclave for the Oranian and the Northern Archantan ethnic population, featuring distinctly Bai, Gohangukian, Ninwan and other Oranian cultural elements. It is bordered by the Embassy District to the north, the Cemetery of Patriot's Honour to the east, Oldenthrope to the south and Brottenly to the west. It is also where the Department of Commerce and Labour is located.

During the colonisation period, Grylster was where the Bai population, along with other ethnic groups subjected to Bai, settled and set up businesses in the area. The area was known through exaggerated reports and tales of slum housing, though that wasn't necessarily the case as there are also shophouses in Grylster. When Huntington was being expanded as the capital, the shophouses and slums were forced to make way for the expansion. The resident protested and the city planners eventually agreed to resettle them temporarily and as compromise remade some shophouses for the area for the returning population.

National Council for the Freedom of Antigo

The National Council for the Freedom of Antigo is a loosely based umbrella group of the exiled opposition to the Antigoan government. Initially founded to protect Antigoan defectors and the diaspora abroad, it later took on a more political role denouncing the Antigoan regime, gathering intelligence and giving further insights in the inner workings of the regime. It has mainly assisted defectors to escape from the oppressive regime and also promote what Antigoan culture really is.

The Council has never advocated being the 'alternate' government to the current Briarmack regime, though often it has been treated as such by various government. Some nations such as Pretany does not recognise the organisation and has been deemed illegal on the grounds that it advocates Antigoan self-determination.

These flights were now put into consideration given Antigo's breakthroughs in technology and may be used for its future flights to 'enemy states'. All of its flights are one way only. The carriers don't necessarily land at airports. You can land anywhere you want so long the calculations are right. Majority of our flight carriers are personalised for one passenger. There are no in-flight entertainment or air stewards provided for these flights. Taking a flight to any of these destinations is a once in a lifetime experience. We have a no refund policy but hey you wouldn't need to regret your experience! Even if we do we can't return it anyway. Not to you especially.