The Vang Ngat Island Line (Kuehongese: 线塘铁岛邦咯 Tuyến đường sắt đảo Vâng Ngát) is a railway line operated by Kuehongese National Railways (KNR) in Kuehong. It begins from Kiet Tai station to Co Phan station via stations in Vang Ngat. The line also has two separate spur lines— one from Hoang Mau to Ben Pha, and another one connecting to the Chung Nguoi Airport.

In addition to passenger services, there are also freight services for transporting goods on the island.

The Earnest Urban Rails Corporation (EURC) was chartered in 1827 by the Ingerish Ardentic Company to build a railway line from Earnesttown Harbour (today's O-man) to another Ingerish-run port of Keverson (today' Kiet Tai), which is the first segment of today's line. The Bai eventually agreed to lease the lands to the Ingerish with an annual payment of 3000 Tallers to the Bai.

The line was eventually completed in November 1836, with five stations (Keverson, Tra Lung, Redhall (Hoang Mau), Brentloop (Bua Lap) and Earnesttown). Meanwhile, the EURC had an agreement with the Southern Fayaan Railways Company (SFRC) to accomplish an ambitious plan to connect from Fayaan to central Kuehong. The EURC made plans to extend the line from Earnesttown to Chung Nguoi, and also from Keverson to Phong Thinh, while the SFRC builds from Fayaan to Tra Lung, with a spur towards the island connecting to Chung Nguoi.

After the agreement fell through, and the EURC went bankrupt in June 1871, the line was closed. In 1876, another rail company, the Vang Ngat Electric Railway, a subsidiary of the Vang Ngat Electric Company, acquired rights to restart operations of the line and used electric locomotives for the line. The company later got acquired by the West Kuehong Railways in 1892 and managed to lobby the Bai to revisit the project to extend the line from Tra Lung to Phong Thinh. With Bai funding, the line extension was completed in 1899, and the newly extended line became known as the Northern Kuehong Line.

On 6 February 1902, the West Kuehong Railways then acquired another company, the Tra Lung Passenger and Freight Limited, which has been operating a rival rail line along the mainland from Bo Hat to Kiet Tai since 1876 (the line also extends to Co Phan but that part of the line remains closed until the acquisition). On 24 August, the Vang Ngat Shuttle Island Service was formed and through services from the mainline stopped due to low demand.

In 1907, it was planned to close down the existing station in O-man to facilitate the expansion of ferry facilities in the area. Plans were then made to construct another rail line to an alternative site through Do-Mi. The alignment was also such so as to serve the new industrial areas in Do-Mi. The former building for the Ingerish National Bank was then converted to today's O-man train station and refurbished to facilitate rail operations. The new branch, then known as the Do-Mi branch, was completed in July 1909. The ferry terminal branch ceased its operations that August and shuttle buses were arranged for those wishing to travel by rail. (However, later due to workers' strikes and riots, the works for the expansion of the ferry terminal was suspended in 1910, and hence the ferry terminal still stands today).

After the construction of Chung Nguoi Airport in 1935, a spur line was built from Bo Hat to the airport, and was completed in 1947. By this time, the line came under the control of the state-owned Kuehong National State Railways under the communist regime. Meanwhile, as part of the communists' ambitious infrastructure proposals, plans were also made for a through rail service across the island, extending from O-man and connecting to Chung Nguoi, which by then has a functioning airport. However, it was not feasible to connect the line to the north of the station, which was then occupied by the airport terminal building. Options either having to remove the terminal building altogether or to remove the current airport station and relocate to a new site were studied and seen as not feasible. Hence, the new extension then connects to the existing line south of Chung Nguoi station instead. The station then became isolated as a separate branch. The stretch from Bo Hat to Co Phan then became part of the Vang Ngat Island Line in addition to being part of the Northern Kuehong Main Line.

The new extension was completed on 2 December 1952, but after a few days, it was declared reserved only for party officials, planning to reduce passenger traffic to make way for freight services. In 1954, passenger services for the line were suspended for the year as the communists devoted more efforts to boost the economy on the island. (At the same time, the communists went on to construct new tracks along the line to boost freight services' frequencies.) This has sparked protests, eventually cumulating into unrests against the communist government which was overthrown in a coup in 1955. During the unrests, many people board the freight trains in defiance, some formed man-made barriers on the tracks and even block the tracks by themselves to disrupt the services.

Train services were then suspended on the line after the coup until the unification, although there were some emergency train services during major festive seasons to help Vang Ngat Islanders to travel to the mainland and vice versa. In 1963, the newly-founded Kuehongese National Railways took over operations of the line and steps were taken to further modernise the line, such as replacing wooden sleepers with concrete ones. Semi-automatic train control was also installed. The 70s to 80s also saw further refurbishments to the stations, with expanded concourse and ticketing areas and longer platforms to accommodate the longer peak-hour trains.

On 7 March 2003, it was decided to reinstate services along the Ferry Branch in response to complaints that the shuttle buses between O-man station and the ferry terminal often got stuck in traffic, and that it was a comparatively longer route than taking the branch. A brief pilot scheme on an express service for the ferry terminal (from Tra Lung) was implemented from March to July; it was not really successful as ridership was lower than expected. Hence, it was shortened to a shuttle service between Hoang Mau and the ferry terminal. The reopening of the line is meant to be a temporary measure until the opening of the new O-man Light Rail Transit system in July 2021. 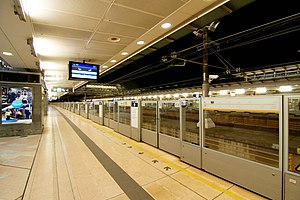 Half-height Platform Screen Doors (PSDs) were being installed along the line; test runs on the PSDs were being conducted in 2018 to 2019 at selected stations (O-man and Ngat Lan). This was in response to the public concerns over the safety of the rail line. It is expected for the installations to be completed by 2022. In addition to improving safety on the rail line, fences were being installed along the rail line, and level crossings signals were upgraded to better alert pedestrians and vehicles before crossing.

The electrical supply and signalling systems of the line are being upgraded in a programme to increase peak-hour capacity on the line, by about 20 per cent at the end of 2020. Noise barriers were also being constructed to mitigate noise pollution produced from the line.

New trains are being purchased to increase capacity on the island.

A study has been underway to see the feasibility of a new rail branch from Cat Ma to Ngat Lan, in addition to plans such as a light rail line. It was also proposed to build a new infill station at Thanh Nao Kha, between Ngat Lan and Sap Dang, in preparations for the future development of the area.

In the 2008 Development Plan for Vang Ngat, it was proposed that the rail line from Thang Cang to Sap Dang could be converted to be part of a mass rapid transit line. However, concerns raised was the cost of the conversion and the feasibility of doing so. In 2014, such plans were largely withdrawn after a study found it unfeasible. In 2020, it was again brought up as a possibility for the future of the rail line, with certain parts converted for a future mass rapid transit line.