Country landscape is dominated by Red Mountains which constitue its southern border. Additionally in the north, close to border tripoint between Dregovine, Suria and UL17g large vulcano called Mighty Mountain (Mahutnaja Hara) can be found.

Despite small size Dregovine is relatively minerally rich. Large deposits of nikel can be found in eastern part of the country. The volcanic activity of Mighty Mountain created large reserves of natural asphalt. In the Illyrian autonomous oblast there are some areas rich in oil.

First known inhabitants of Dregovine were Turquan people, probably close related to contemporary Surian Hatrids. However in the early sixth century Slevic Dregovinians arrived to the area and forced Hatrids to move north, more to inland Suria and to Arslanid Kaganate in the south.

Dregovinians established their kingdom in 982. Originally the country spread to some areas in Suria but didn't control the area of contemporary Illyrian Autonomous Oblast. During the Demirhan-Illyrian war in 1462-1474 king Ihor raided weakened Illyria and conquered vast amounts of land. Lots of them however were lost in 16th century due to Illyrian revenge wars.

The country later engaged itself in series of distructing wars with Suria which led to loose of independence in 1798. Under Surian rule the Dregovinian language and culture were supressed and many Surians settled in the country.

During September revolution Dregovinians initiated a patriotic movement which tried to gain independence. The organised uprising thanks to arms provided by Demirhan Empire was initially successful as lack of interest of Surian White Army engaged in internal conflict in Surian core lands. However things changed when the forces of White Army started to loose. Red Surian Army tried to reestablish the control in pre-revolutionary Surian borders. As a result Dregovinians started to seek more help in Demirhan Empire. Sultan Süleyman II ordered them to ally with White Surian Army in hope to create anti-communist buffer country between Demirhan Empire and communist Suria.

Demirhan army entered Dregovine in early 1915, shortly after that tsar Vladimir and his family were kidnapped and transported to Litusava. As a response Red Surians headed their army to Litusava but were stopped in the city outskirts by joint Demirhan and tsar forces. As a result ceasefire between Surian Tsardom and Socialist Confederation of Suria was signed establishing a provisional border.

Surian Tsardom however did not drop the claims over the entire Suria til the death of tsar Vladimir IV (Uładzimir IV in Dregovinian) in 1932. As a consequence the Tsardom changed its name to Tsardom of White Dregovine in distinction to Red Suria. 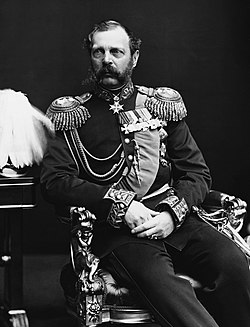 Litusava where the capital of the country was predistinated to be located was the provincial town where people lived mostly the same for centuries. According to the memories of tsar Vladimir daughter, Nadia:

When we arrived to Litusava there was nothing we used to have in Surian capital. There was not even electricity and the only source of water was the nearby river. We were accomodated in old castle in the old town, cold in the summer, even colder in winter. And that smell! I sometimes understand why the people started the revolution, we treated them so badly...

Shortly after the war the modernization started thanks to help from Demirhan Empire. However it stopped shortly after, in 1923 after deat of Süleyman II. Next sultan, Murat VI was not very willing to sponsor the uncertain province. As a consequence Vladimir turned for help to ULg. ULgans while agreed to help, required autonomy for their people living near the border. When tsar gave the autonomy the construction started again and in 1924 the new power plant was established. Three years later new government zone in Litusava was established.

Simultaneously to infrastructural reforms the political reorganization happened as well. The new Constitution was established in 1918 and first elections to parliament were held next year. However the elections were far from democratic - the peasants had limited freedom of movement and therefore some of them could not legally vote. They were however given freedom of movement only three years later and next elections could be seen as moderately fair according to current standards.

During next decades Dregovine balanced between Demirhan Empire and UL17g. The relations with Suria were partially normalized however the cooperation economic cooperation remained limited as possible. Turning point of Dregovinian politics was enthronement of Süleyman III in Demirhan Empire. Sultan politics marked by very strong anticommunism and nationalist politics was warmly greeted in White Dregovine and many joint initiatives like construction of M1 magistral road came to being. In consequence Dregovine aligned itself with Demirhan Empire as special ally and that relation remained stable til present day.

Despite reforms tsar remains the central point of Dregovinian politics as head of the government with right of veto. The laws in contrary are voted in democratically elected parliament with 123 members. The members, as well as people, have political freedom of opinion and thought, with the exception that communist views are seen as betrayal to the state and therefore the highest penalty for expression of them is death, however it was never used in country history. Tsar good name is protected by law and insulting the ruler can rsult in fine or prison sentence.

Auronomous Oblast has own legislature with limited powers over education and self-governance composed of 57 members.

Last elections for national parliament were held in 2021 and resulted in stable victory of National Unity Front, the long time dominant party of the country.

The country economy is focused on heavy industry, mining and farming. The most important produced ore is chromium. Dregovine is also oil producing nation but all resources are under Demirhan Empire control.

Country is divided into four voivodeships, one autonomous oblast and one separated city (Litusava).

Autonomous oblast unlike centraly governed voivodeships has own parliament with limited rights to self-governance. In the autonomous oblast Illyrian is co-official language and Illyrian language is taught in schools.

Dominant group of people living in Dregovine (72,61%) are Dregovinians who are believed to be native to the region. Other important group are Illyrians (13,52%) living mostly in Autonomous Oblast, followed by Surians. For political reasons Surians are divided to White Surians (5,54%) and Red Surians (3,15%). First group are the ones who arrived to the region before Surian Revolution and the noble families from Suria, second are regular immigrants from communist Suria. The last important group are Turquese (1,95%) who arrived to Dregovine as bussinessmen or part of peacekeeping forces.

Main religion of inhabitants of Dregovine is Ekelan Christianity followed by 74% of people, followed by Iman Irfan with 7%. Other religions are followed by less than 3% of population, while 16% declares themselves as atheists.