Albalad Siriun, is a semi-presidential republic located in northern Tarephia, largely covered by the Serion Desert. It is bordered by TA023 to the east, TA026c and TA017 to the north, TA024 to the west, and TA021 and TA013 to the south.

The country has a history that dates back thousands of years, to the rise of one of the continent's earliest urban civilizations along the Palliatic River, which began around 3000 BCE. It later became the political and cultural center of the Serio-Mazanic Caliphate, and today the country is considered the heart of the traditional Serionic way of life.

Haez, the modern capital of Albalad Siriun
Albalad is a Mazanic phrase that translates roughly as "the community." In common usage, it has also come to mean "the homeland." The country's modern name, established in the 17th century as Serionic peoples continued to push back against Castellanese attempts to colonize the Serionic Peninsula, thus literally translates as "the Serionic Homeland," or "the Serionic Community," emphasizing Albalad Siriun's role as a religious and cultural stronghold.

Civilization in the Serion Desert first took root around 3000 BCE along the Palliatic River, where early farmers were able to cultivate crops. By 2000 BCE, that civilization stretched along the length of the river, from the Sea of Uthyra to present day Sogonia. During this same period, nomadic tribes in the Serion Desert formed their own early trading network, creating a parallel civilization. The nomads formed into separate “kingdoms” controlled by a series of warlord-kings, and eventually overtook the Palliatic River Civilization ac. 1900 BCE.

Thus began the era known as the “Shifting Sands Period.” The Serion Kings divided up the region and, despite occasional periods of turbulence, maintained a relative stability across the desert for more than 1200 years. During the 700s BCE, the rise of the Pohenicians along the coastal areas sparked a breakdown, leading to Al-Aqsim, the “Partitioned Period.” Many areas formerly under control of the Serion Kings became Pohenician supplicant states, while the upper Palliatic and the surrounding desert (roughly corresponding with Albalad Siriun's contemporary borders) consolidated into a single kingdom, maintaining the traditional Serionic way of life.

The region first took to Christicism in the 4th century CE, then converted quickly to Imanish in the 7th century upon its arrival from across the Uthyra. That led to the rise of the Saltanat Mujyda, a powerful dynasty that established the Serio-Mazanic Caliphate. The Caliphate stretched across the desert, reuniting much of the territory formerly controlled by the Serionic Kings. The Caliphate, with Haez as its capital, would dominate the region until the arrival of the Castellanese colonists in the 1450s.

Colonization efforts across the region caused a period of great political strife, as the Caliphate broke apart into a mix of Castellanese territories and separate Imanish city-states. During this period, known as Ainfisal (Schism), Albalad Siriun took on its current shape, and once again became the primary center of the Serionic way of life as its leaders fought to stave off Castellanese incursions. Today the country remains one of the largest and most culturally stable in the Serionic region.

Albalad Siriun is a semi-presidential republic, with a unicameral legislative chamber and the President. The Albalad Siriun House of Delegates is the sole legislative chamber of Gamen, whose members are elected to five year terms. The last elections were in 2014, and the next elections will be held in 2019. The presidential elections are held two months after every House of Delegates election, and the President also serves for terms of five years, though the President can only only serve for two terms.

The president has the power to declare wars, declare a state emergency, and appoint 5 delegates from the House of Delegates. The President also holds the title Supreme Commander of the Albalad Siriun Armed Forces, and holds the same power as a 5-star general within the military.

The legal system is one in which the Supreme Court of Albalad Siriun, consisting of 7 juries selected by the President and voted on by the House of Delegates. All national cases of importance go to the Supreme Court of Albalad Siriun. Each Governorate also has a Governorate Court, in which major cases in that Governorate go to. The current legal system allows for the death penalty to be sentenced to people not present in the trial.

The military of Albalad Siriun is somewhat influential in politics, being that current military officers are allowed to run for office & retain their position in the military. The President can appoint or remove generals from the military, except for 5-star generals, who hold their position until they resign.

Keeping this topic only to mark embassies. Not more than this is needed to talk.

Also there is the (still not mapped) Puerto Damescu airport able to international flights, but only from/to closest neighbor countries.

Still there are airports to local flights in every governorade capital. 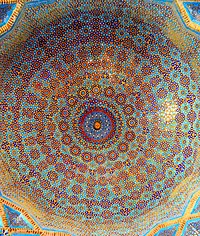 Intricate mosaic work decorates the interior of a mosque in Idnah
Locals are a religious people - it explains how much places of worship are set, even in smaller villages. There are so much more mosques, but also some churches.

Albalad Siriun speaks the not so well defined Serionic Language - a conlang, sounding like a mix of mazanic (arab) and turquese, but not necessarily using real words from these languages.

Albalad Siriun people like sports, but it is not a so important thing in citizens life. The most popular is football, the national team and the national league are away to be among the best ones even in the continent.