Anna Túrsson (real name: Anna Túrsdóttir, * 3 July 1950 in Fleiribæjarhlaði, † 12 September 1984 in Markvað) was a norlensk singer-songwriter who was assasinated due to her engagement against the norlensk military regime. When her death was getting known, it sparked off protests in Markvað which directly led into the ''Rauðsumar'' popular uprising which ended the time of the regime.

Túrsson was the youngest child of a five-person family. She spent her early days in the minig city of Ban, where her father worked in a coal mine and her mother worked in the same mine as a secretary. Also, her older brother started his career as miner later on. 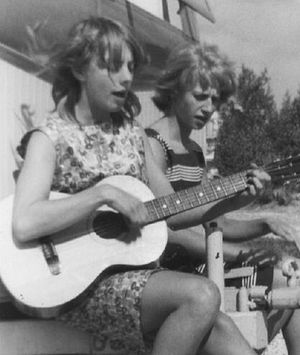 Quite early, her parents recognized Anna's talent as a singer. With 10 years, she played a friend's guitar for the first time. Her parents saved money for buying her an own guitar, which she got as a birthday present when she turned 11.

With 12, Anna was sent to boarding school in Fleiribæjarhlaði. There, she was lucky enough to have a music teacher who recognized her talent and gave her private lessons. Real lessons would have been unaffordable for her parents.

The life in the Ban-Dirðrin-Nauðrin region was (and still is) heavily influenced by the coal mining industry; some of Norðurland's largest coal mines were situated here. More than 60 % of the population was directly or indirectly involved in coal mining during Túrsson's childhood.

Part of the Ban disaster memorial site
The situation of the people, especially the miners was very bad. The wages were miserable, as well as the safeness of the mines. Lots of accidents claimed the lifes of many miners. In 1966, 1416 miners and 4471 noninvoled people lost their lifes in the most severe mining catastrophy in the history of Norðurland, the ''Ban disaster''. A massive underground explosion, which killed hunderets of miners directly or indirectly, caused a seismic event which led to a landslide into the reservoir of the dammed-up Banða river. The subsequent flood wave overtopped the dam, resulting into a 250-metre megatsunami that brought massive flooding and destruction to the valley below, wiping out the city of Ban almost completely.

The incident had a tremendeous social impact on the region. Almost every family lost a close relative due to the accident; more than 300 families lost all members. Anna lost her parents, her brother and two of her three uncles on that day. She and her sister, only survived because they were at boarding school in Fleiribæjarhlaði, like many other children (which is the reason why mostly children between 12 and 18 survived the incident).

The regime didn't react to the disaster in any appropriate matter and no help was offered to the bereaved. Also, the government kept any information about the accident secret. A large protest movement started to build up; the coal mines were occupied. However, the demonstrations were brutally quelled. Again, 140 people lost their lives and many were injured and imprisoned under accusation of treason against the people and the republic.

Anna and her sister, both severely psychologically influenced by the incidents, had to move to their last remaining uncle in Markvað.

Despite the personal tragedy, the relocation to Markvað gave Anna the opportunity to get in contact with the city's thriving, diverse music scene. During that time, music helped her to cope with her bereavement and she wrote her first songs. With 17, she fell in love with the singer-songwriter Gunðalf Hendriksson, which also sparked her creativity. Her friend helped her to publish her first songs and when Anna was 18 years old, she had her first small concert. From there on, she called herself Anna Túrsson, which is logically wrong as she is a woman. However, she thought that this surname sound much better.

Very early, Túrsson began to write songs which deal with the bad conditions of the norlensk population. Besides, she wrote songs to encourage people to enjoy their lifes, even under the bad conditions they experienced. And she wrote songs that glorified the past of her country. More uncritical songs described the beautiful nature of Norðurland or situations she experienced on the streets of Markvað.

Together with her friend, she moved into a musical collective in 1968. However, she was the most critical one of her collegues and the only one who dared to critizise the military junta directly. For that, she paid a high price: in 1970, her friend was shot during a security sweep of the musical collective. It was clear that his was ment as a warning for her. Hoewever, Túrsson didn't stop to critizise the regime - on the contrary. Her lyrics even got more direct. So in 1971, she was outlawed and had to flee to Ingerland.

Her musical talent and her reputation as Norðurland's most critical voice opened her the door to the most renowned university of arts in Ingerland. She was also offered the ingerish citizenship, which she refused. She alwas had the plan to return to Norðurland on some day.

During here exile years, Túrsson's oeuvre was complemented by lots of songs in ingerish, however, she still was very interested in the situation of ther fellow countrymen and still wrote critical songs in norlensk. Friends of her managed to smuggle her songs to Norðurland, where they enjoyed a large appreciation. Túrsson already was seen as a figure of resistance and source of inspiration for many Norlenskers. Even if the government put most of her songs to the index, people found ways to enjoy her music.

In 1981, Túrsson held a speach in front of the Assembly of Nations, calling all participating states to end the war against Norðurland immideately. A year before, nations around the Vinnic Sea declared war against Norðurland because the norlensk navy refused ships the right to pass the Hleðesund without paying a horrific tax (see Hleðesund conflict). Túrsson reminded the committee that the war eventually hits the wrong people. The population paid the price for the stubbornness of the military junta. However, her speach didn't had the desired effect and the war continued.

With her songs, she tried to encourage her people to preserve the war which led to even greater poverty in the norlensk population. She suffered so much from the worse and worse news from her country that she decided to take the risk to return to Norðurland. To a friend of her who warned her off her plans to return, she wrote: How can I sing about revolution when I sit in a cosy, warm home with lots of luxury that nobody in my country can enjoy? How can I talk about revolution when I'm not directly involved into it? I know much about what's going on at home, thanks to you and all my other friends. But it isn't the same as being there.

So in April 1984, she returned incognito to Norðurland.

Circumstances of the assasination

In 1983, still in exile, Túrsson wrote a song called Rauðsumar (red summer). This is how people in her home call the time of the polar days. In Ban, which lies on the 66th parallel, the twilight often colors the mountains and the landscape in a characteristic reddish hue, where the name originates from.

In this song, Túrsson writes a fictional letter to a good friend in her home and tells him about her homesickness and her urgent wish to return to her home once again to see the reddish mountains during the polar days in summer. However, the text contains clear metaphors that encourage to rebel against the regime. The refrain says:

Let us reuinite again, my friend At the sepulchres of our fathers. Let us get as inspired as we once were By the invincible spritis of the Rauðsumar

Let us watch the lands ablaze. How it sparks the fire of our souls Let us feel the vigour of the light As it takes our lands and hearts by storm

Let us bring the light to our beloved ones We went through darkness all too long Let our pain come to an end Before the sun goes down in autumn.

The song was published in spring 1984 and smuggled into the country, where it didn't defeat it's purpose. The regime quickly put the song on the index; however, it went viral in the underground.

But this song finally was too much for the military regime. They didn't appreciated Túrssons tries to encourage the population to commit civil disobediance in the past. But with this song, she crossed the line, at least in the eyes of the regime. So besides her status as outlaw, they accused her of incitement and high treason against the country.

For Túrsson, this meant that a reentry now meant a high chance to get captured and sentenced to death. However, she reentered Norðurland in April 1984.

Reactions to her death

Túrsson's songs are still enjoying a large popularity in Norðurland today. Besides the very famous Rauðsumar, there are many other songs which stand out for several reasons.

Today, many roads and streets in Norðurland are named after Anna Túrsson. In Ban, her home town, and many other cities, memorials were erected in her honour. Túrsson's head and her guitar are shown on the 50 krónur note, together with an excerpt of the Rauðsumar lyrics (Let us get as inspired as we once were // By the invincible spritis of the Rauðsumar) in norlensk and ingerish.

The most noticable appretiation and conmemoration of Túrsson is the adaptation of her song Rauðsumar as the official national anthem of Norðurland. As this song became such important during the uprising, the new government, highly inspired by the force of will of the people, decided to honor it's importance and influence.

Túrsson's live and her impact on the uprising is covered in countless media titles. As her role in the uprising is such an important one, she is mentioned in lots of documentaries about that time.